Opposition members walk out of LA in support of Alva Suckoo

Members of the Opposition along with MLA for George Town Central, Kenneth Bryan, said they were throwing their support behind Deputy Opposition Leader Alva Suckoo when they walked out of the Legislative Assembly (LA) on Wednesday.

The walkout came as Suckoo was suspended from Legislative Assembly (LA) after Speaker of the House McKeeva Bush noted that Suckoo was in breach of standing order 354 and demanded an apology.

Standing order 354 notes that, “No member shall impute improper motives to another member”.

The breach follows from a comment Suckoo made last Thursday on Cayman Brac in relation to a motion calling for a referendum on the controversial cruise berthing project.

After refusing to apologize, Suckoo, by way of vote, was asked to leave the LA.

With the exception of West Bay legislator Bernie Bush and Independent candidate Kenneth Bryan, all the members on the government benches voted in favour of booting Suckoo.

However, Suckoo, wasn’t the only one to exit the LA as members of Opposition and Bryan also followed suit and marched out of the building.

Speaking at a press conference held earlier today about the matter, Opposition Leader Ezzard Miller, said that Suckoo had been “unjustly censored”.

Miller further noted that he had grave concerns about the letters from China Harbour Engineering Limited among other correspondence tabled by the Speaker of the House.

“Conveniently, he did not table the letter entitled ‘To Whom It May Concern’ under his hand from his alleged company WMB International Consultant Limited that indicates his interactions with China Harbour and Sinopharm,” said Miller at the press conference. 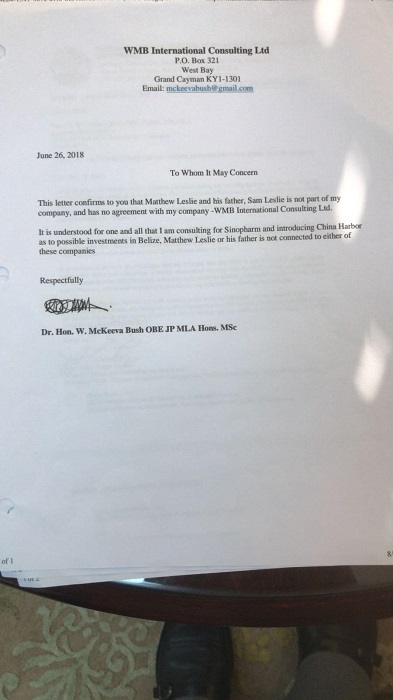 “I have grave concerns about the contents of the correspondence tabled this morning, we are concerned information in the correspondence may need to be reported to and investigated by the Anti-Corruption  Commission,” added Miller.

Miller further added that the screenshot tabled, which involved exchanged between Suckoo and Scott Henderson, may be in violation of the local ICT Law.

The Opposition used the opportunity to note that this ordeal was an example of the need for the commencement of the Standards and Public Life Law- which was passed almost four years ago.

Speaking to Loop Cayman Suckoo noted that he was not averse to apologizing but noted the he did not know what he was to apologize for.

He further noted that his comment made in relation to motion were only aimed at bringing public concern about the project to the forefront and in doing so had made mention of a letter that was in circulation.

Opposition leader Ezzard Miller brought the motion calling for the public to be given the chance to decide the fate of the port project, however the motion was shot down by government members who voted against it.

Cayman Governor 'temporarily withdrawn' from post due to complaints

Coronavirus cases in the Caribbean to date: 225,875