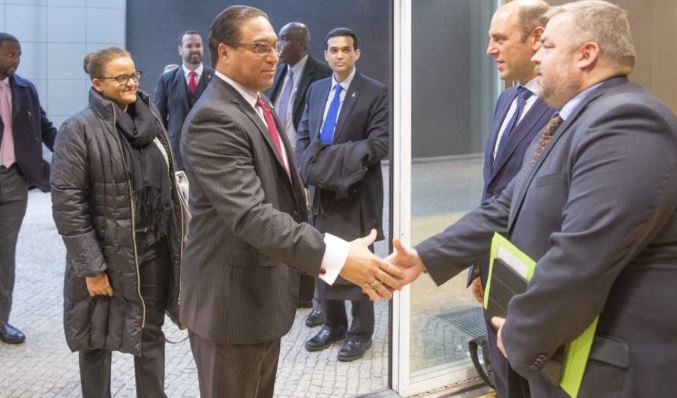 On Monday Premier Alden McLaughlin and members of the Cayman delegation had discussions with members of the EU Commissions of Moscovici and Dombrovskis along with representatives of the EU’s DG Taxud and the Code of Conduct Group.

Discussions were also had with the representatives of Belgium, Cyprus and Luxemberg.

Boublil is a member of the Cabinet of Pierre Moscovici, the Commissioner for Economic and Financial Affairs, Taxation and Customs.

Freimanis is a member of the Cabinet of Valdis Dombrovskis, whose responsibilities include Financial Services and Capital Markets. Traynor is Deputy Head of Unit at the Director General of Taxation and Customs Union (DG Taxud).

The delegation is expected to meet with representatives of the EU Code of Conduct Group, which assesses whether particular jurisdictions have tax regimes that are deemed potentially harmful to EU Member States.

Fabizia Lapecorella, the Chair of the Code of Conduct Group, will participate via telephone as she is in Rome. Other members of the group meeting with the Cayman delegation, representing the Chairs Team and the General Secretariat of the Council (GSC), include Mr. Gabriels Annolino (Chairs Team), Andreas Strub (GSC),  Aloys Rigaut (GSC), Kristi Raba (GSC), and  Emer Traynor, representing DG Taxud.

In between the two meetings with EU representatives, the delegation will meet with Christophe Vinck, Advisor General for Direct Taxation at the Belgian Permanent Representation to the EU.

Premier and agriculture minister to attend Denbigh show in Jamaica