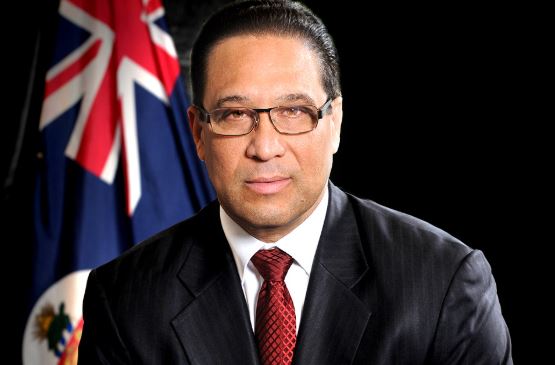 The Premier has today insisted that the controversial Cruise and Cargo Port project is full steam ahead in what is "a highly significant milestone for the future of the Cayman Islands".

He also revealed that the cost will be less than CI$200 million, but restated that no contract will be signed until the petition calling for a referendum on the controversial project has been fully vetted.

Hitting out at those he accused of trying to sow suspicion and "cast doubt" on the project, he stressed that Cayman's new port:

• will deliver jobs and income for Caymanian families;
• will be delivered by a trusted developer and partners;
• is proceeding because we have secured an excellent funding deal;
• has been designed to minimize the impact on the environment;
• has followed and will continue to follow best practice in procurement and delivery.

Verdant Isle Port Partners was formally announced as the Preferred Bidder on Friday, in a project Premier Alden McLaughlin said "secures the future of Cayman’s Cruise Tourism industry and protects the well-being of the thousands of Caymanians who benefit directly or indirectly from cruise tourism".

And in a press conference today, Premier McLaughlin revealed why they were chosen.

He said: "The differences in the three bids essentially involved the extent to which new cargo docking facilities would be improved as part of the project. Having regard to the concerns that have been voiced about the project, while looking to secure long term benefits for the country, the Cabinet selected the option that minimises the environmental impact and delivers the best overall financial deal for Country. The established cost for the selected option will be less than CI$200M, subject to the final contract negotiations.

"All of those involved (the consortium) are trusted, world-class companies and all have had a Cayman connection for decades. As I mentioned on Friday, Orion Marine Construction purchased Meisner Marine Construction, which is the company that previously built the Royal Watler Cruise Terminal as well as the Creek Dock in Cayman Brac.

"This is a moment that the majority of the people in our Islands have been aiming to get to for at least 20 years if not longer. Certainly, every Government elected since 2000 has had promises of a cruise port in their election manifesto or as part of their delivery plans.

"It is the hard work done by the last two Administrations that means we are now, finally, able to announce that we are in a position to proceed with the delivery of the new port facilities this country needs for the future."

Premier McLaughlin said it had taken almost four years to achieve what we have today:

• A unique financial structure that does not expose the finances of the country to risk;
• A cruise berthing facility with no one single major cruise company controlling it, but instead one that will be managed and owned by the Port Authority on behalf of the people of the Cayman Islands;
• Enhanced cargo port facilities;
• No new upland development other than to modernise the existing facilities;
• A final design that significantly reduces the environmental impact of the project – building in deeper water as well as relocating coral;
• A financial model that binds the cruise lines to the long term delivery of the port;
• A project structure that has ensured that at every stage along the way we have followed the strict requirements of the Public Management and Finance Law and the Framework for Fiscal Responsibility.
• And finally announcing today the preferred bidder along with the other information that we promised would be made available at this juncture.

Amid controversy and disquiet, the Premier said he accepted that "our inability to answer questions definitively up until now has been frustrating".

"Perhaps inevitably, over the past year in particular, Government has been bombarded from various quarters, including by some media platforms, with a plethora of questions that we could not discuss till the process was completed.

"However, we always promised that as soon as we were able to do so, we would answer the questions people have had. We explained over and over why that could not happen until now.

"Yet despite the explanations we provided, there are those who were determined to prevent the port project proceeding and who took advantage of our inability to comment fully to put forward several unfounded allegations that were just wrong – indeed, some would say they were downright untruths."

The Premier hit out at some he accused of pedalling untruths, allegations of corruption and secret deals, insisting: "There were no secret deals with anyone and we have never been in discussions for anything other than the port project itself.

"While there have been a small number of opponents who were willing to do or say anything to cast doubt over this project, most Caymanians who have expressed their concerns or asked questions have done so for perfectly understandable reasons. They are concerned that if the country is to embark on this project then we must get it right – the right design, the right costs and the right balance between the economic benefits and the environmental impact."

He also addressed Opposition challenges over the validity of the procurement process, revealing that independent legal advice was sought and guidance adhered to.

Addressing again the issue of the people-initiated referendum on the project, Premier McLaughlin stressed: "My Government respects the provisions in the Constitution and most importantly we respect the people of the Cayman Islands who have signed the petition for a referendum.

"And so, I will again repeat what I said on Friday. Notwithstanding Cabinet’s approval of a preferred bidder,  the Government will not proceed to execute a contract before the 1 October, 2019, in order to allow for the completion of the people-initiated petition verification of signature process."

He also refuted the claim that “it is the government’s intention to challenge the call for a people’s vote in the courts”.

Concluding, he added: "I have always been of the view that the vast majority of people in these Islands have for decades supported cruise berthing as well as the need for improving our current, very old, cargo dock facilities.

"Now that we are in a position to provide the information we promised, I have no doubt that even should we go to a referendum that it will be won overwhelmingly in favour of us completing the project and placing our Islands in the best possible position to maintain and grow an important part of our economy.