The Premier's productive visit to the UK 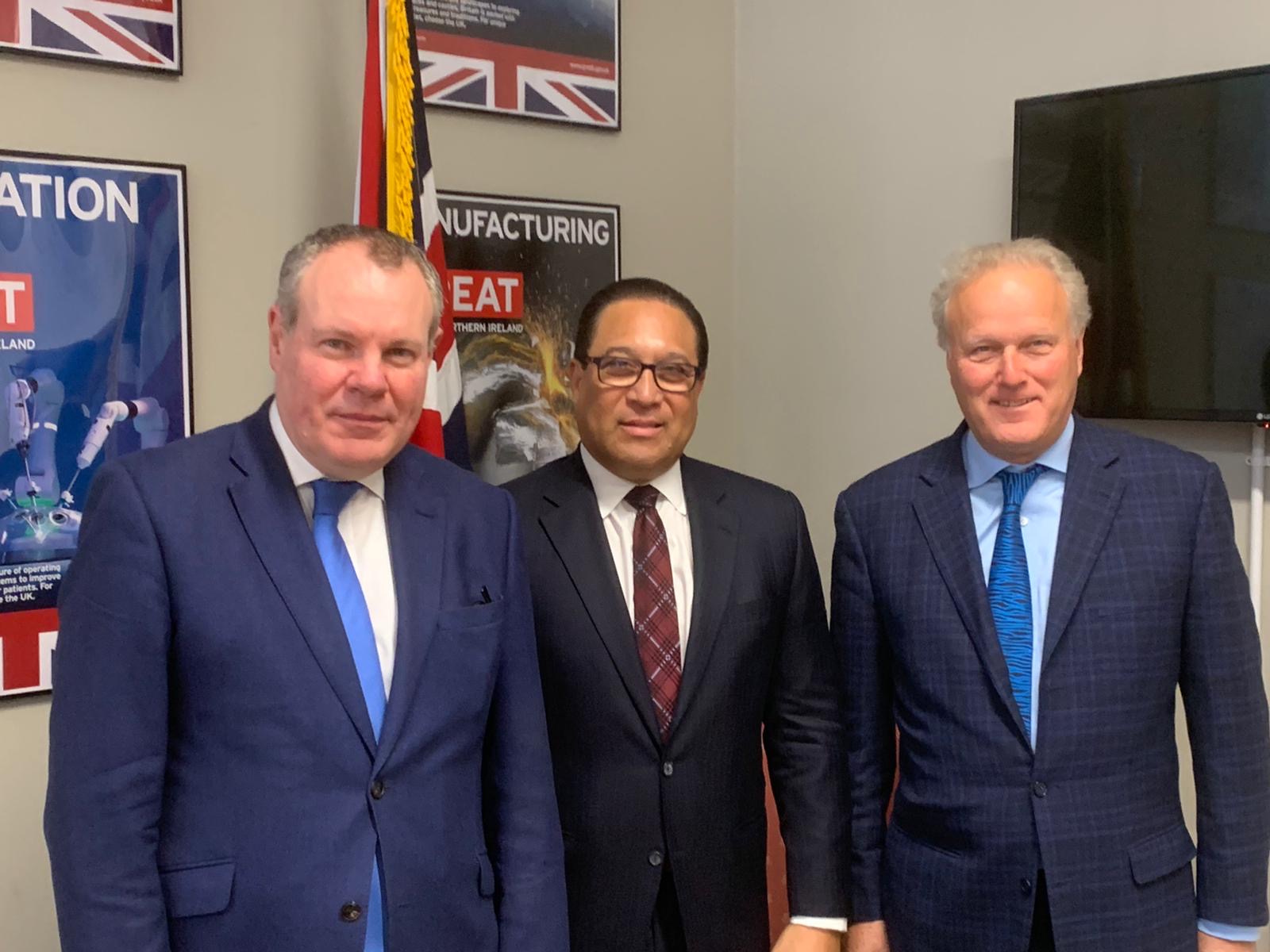 Premier Hon. Alden McLaughlin and the Cayman Delegation returned from London on Friday night after a series of meetings, including a meeting with HRH The Prince of Wales at Highgrove House his private residence, as well as separate meetings with the Rt. Hon. Conor Burns (Minister of State at the Department for International Trade) and Sir Edward Lister (Chief Strategic Advisor to UK Prime Minister Boris Johnson).

Joining the Premier for these meetings were Alasdair Robertson of Maples; Jess Shakespeare of Pricewaterhouse Coopers; Dan Scott and Eleanor Fisher of Ernst & Young; Kevin Lloyd of KPMG; and Lord Jonathan Marland, Chairman of the Commonwealth Enterprise and Investment Council. Chief Officer Eric Bush of the Ministry of International Trade and Roy Tatum, Head of the Office of the Premier also participated.

While in London Premier McLaughlin also met with Baroness Sugg, the United Kingdom’s new Minister with responsibility for the Overseas Territories.

The meeting with HRH Prince of Wales focused on a Cayman Islands based ‘Blue/Green Fund’ initiative that was introduced to the Prince when he visited the Cayman Islands in March 2019. The fund is aimed at providing financing to Blue/Green projects in the Caribbean. Work on the fund has progressed and it is anticipated that it will be officially launched at the next Commonwealth Heads of Government Meeting (CHOGM) in June of this year by HRH Prince Charles and UK Prime Minister Boris Johnson. HRH Prince Charles had proposed such a fund at the 2015 CHOGM in Malta, however, to date it has not been able to get off the ground.

The Prince was excited that Cayman Islands entities and a Cayman Islands fund will finally be able to achieve this longstanding goal. The initial funding will be from local investors, and the initial green project to be funded is expected to be in the Cayman Islands. It is anticipated that there are also institutions and wealthy individuals internationally ready to invest a total of US$1 billion into the fund. The fund arrangements can also be replicated to focus on blue/green projects in other parts of the world as well. This is not only exciting for green initiatives generally but also shows the value of the Cayman Islands' financial products in providing solutions to benefit green initiatives in the region and beyond.

The meetings with the Rt. Hon Conor Burns (Minister of State at the Department for International Trade) and Sir Edward Lister (Chief Strategic Advisor to the UK Prime Minister) was an opportunity for the Premier and the Cayman delegation to provide key advisors of Prime Minister Boris Johnson with an update of the business done in the Cayman Islands, including our fund services, and to speak about the recent EU Blacklisting. The Cayman Delegation received assurances that the UK Government continued to have every confidence in the Cayman Islands and in our financial services business, and they committed to considering making a public statement confirming this confidence. Other matters discussed included the potential for UK and Cayman trade, especially in financial services as well as the Blue/Green Fund.

The meeting with the new Overseas Territories Minister was also very productive and the Premier and the Minister discussed a broad range of issues facing the Cayman Islands and the UK, including the EU listing process. In addition to the Premier. Chief Officer Eric Bush, Andre Ebanks of the Cayman Islands London Office and Roy Tatum attended the meeting. The Cayman Delegation also met with Officials with the City of London to discuss areas of possible cooperation.

“The meetings in London over the past week were very successful. It provided an opportunity to meet with some key advisors to the Prime Minister and to have them hear directly from Cayman business people about our financial services industry and to better understand what we do here, including the extent of our institutional client base,” said Mr. McLaughlin. “We also discussed the EU listing process and the impact that Brexit politics would have had on that”

“It was also good to meet Baroness Sugg who now has responsibility for the Overseas territories and to discuss areas of mutual interest between the UK and the Cayman Islands.”

The meetings, which were organised by the Ministry of International Trade, Investment, Aviation, and Maritime Affairs, are part of the on-going engagement strategy and partnership with the UK Government and the Commonwealth Enterprise and Investment Council.