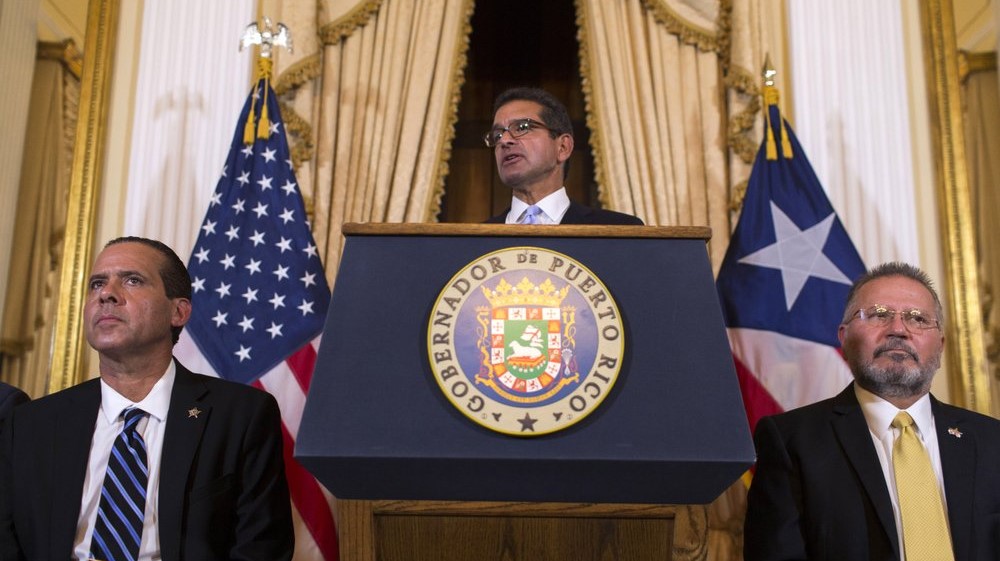 Pedro Pierluisi, sworn in as Puerto Rico's governor, speaks during a press conference, in San Juan, Puerto Rico, Friday, Aug. 2, 2019. Departing Puerto Rico Gov. Ricardo Rossello resigned as promised on Friday and swore in Pierluisi, a veteran politician as his replacement, a move certain to throw the U.S. territory into a period of political chaos that will be fought out in court. Pierluisi is flanked by lawmakers Jorge Navarro, left and Jose Aponte. (AP Photo/Dennis M. Rivera Pichardo)

Puerto Rico’s constitutional crisis was expected to deepen on Monday after the island’s Senate filed a lawsuit seeking to oust a veteran politician recently sworn in as the island’s governor as legislators squabble over who should lead the U.S. territory.

The lawsuit seeks a preliminary injunction ordering Pedro Pierluisi to cease his functions immediately and also asks that the court declare unconstitutional a 2005 law that states a secretary of state does not have to be approved by both House and Senate if he has to step in as governor.

Pierluisi was named secretary of state, the next in line to be governor, in a recess appointment last week. The island’s House of Representatives then confirmed him to the position in a 26-to-21 vote on Friday, a move he argues makes him the replacement for Gov. Ricardo Rosselló.

However, the Senate had not yet voted on the appointment, and it was expected to do so Monday afternoon. It was not immediately clear if that would still happen after the lawsuit was filed late Sunday night.

Pierluisi said in a statement that there is no time to lose.

“Although it is regrettable that this matter has to be elucidated in our courts, I hope that it will be treated with the greatest urgency and diligence for the good of the people of Puerto Rico,” he said.

Rosselló formally resigned on Aug. 2 following nearly two weeks of popular protests amid anger over corruption, mismanagement of funds and a leaked obscenity-laced chat in which he and 11 other men made fun of women, gay people and victims of Hurricane María, among others.

Puerto Rico’s constitution says the secretary of state takes over if the governor steps down, and one amendment states that everyone in line to become governor has to be confirmed by both the House and Senate, except for the secretary of state. Legal experts, however, question the amendment’s validity and believe Pierluisi must be confirmed by both chambers because the amendment contradicts the intent of the constitution and its statement of motives.

Pierluisi has said the upcoming Senate vote is a moot point because he already is governor.

“They’re having a hearing for themselves,” he said on Sunday, two days after stating that if the Senate votes against his appointment as secretary of state, he would step down and hand the governorship to the justice secretary, the next in line under the constitution.

Pierluisi added that he spoke by phone on Saturday with Senate President Thomas Rivera Schatz, who is running for governor in the 2020 general election. Schatz has said he has doubts about Pierluisi and insists that a Senate confirmation is necessary.

Further complicating the situation was an announcement made earlier by Carmen Yulín Cruz, mayor of the Puerto Rican capital of San Juan. She said she will file a lawsuit Monday morning questioning whether Pierluisi had the right to be sworn in on Friday.

The crisis could now drag on for days or even weeks, with legal experts saying Puerto Rico’s Supreme Court will likely issue the final decision if the Senate does not approve of Pierluisi as secretary of state and he declines to relinquish his position. A well-respected attorneys’ organization has accused Pierluisi of “hijacking” the constitution.

Those who oppose Pierluisi said having him as governor represents a serious conflict of interest because he worked for a firm that represented a federal control board overseeing the island’s finances amid a 13-year recession.

During his public hearing on Friday, Pierluisi said he is against several austerity measures sought by the board as Puerto Rico struggles to recover from Hurricane María, including laying off public employees and eliminating a Christmas bonus. But Pierluisi’s brother-in-law is chairman of the board that Congress created to oversee the restructuring of some of the more than $70 billion in public debt after Puerto Rico declared a form of bankruptcy.

Pierluisi previously was Puerto Rico’s representative in Congress from 2009 to 2017 and then ran against Rosselló in the 2016 primaries and lost. He also served as justice secretary under Rosselló’s father, Pedro Rosselló, when he was governor.

Puerto Rico's governor to quit August 2 in face of protests