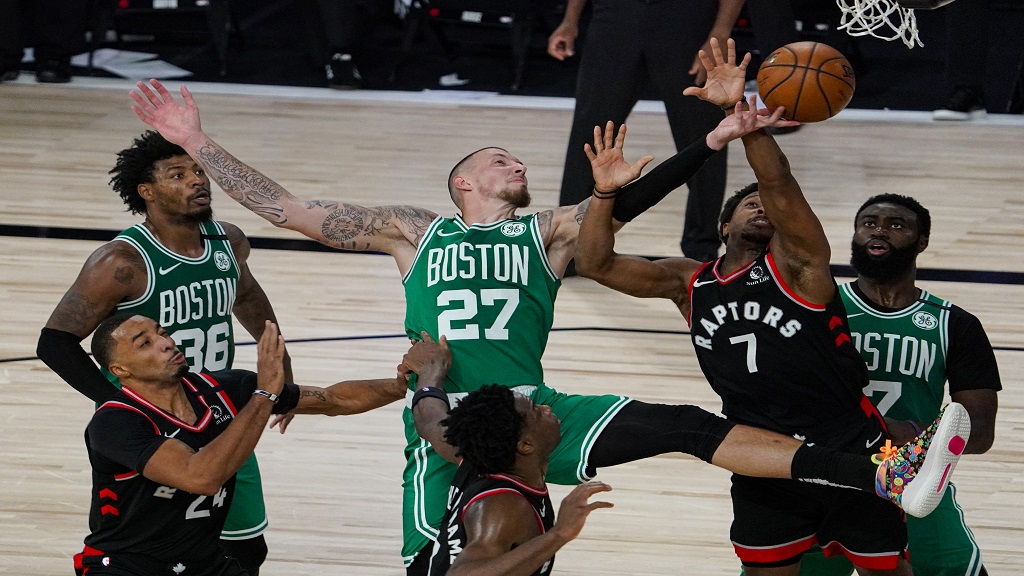 The Toronto Raptors forced a Game 7 against the Boston Celtics, while the Los Angeles Clippers pulled clear in the NBA playoffs.

The Raptors drew level in the Eastern Conference semi-finals but needed double overtime to edge the Celtics 125-122.

A game-high 33 points from Kyle Lowry lifted the defending champions in Game 6 at the Walt Disney World Resort on Wednesday.

The Raptors stayed alive thanks to the thrilling victory and despite Marcus Smart's triple-double of 23 points, 11 rebounds and 10 assists for Boston.

Boston led by four early in the second period of OT and were up by three with one minute, 37 seconds remaining before Toronto fought back.

The Clippers moved into a 3-1 lead over the Denver Nuggets in the Western Conference semi-finals after a 96-85 victory.

Kawhi Leonard finished with 30 points and 11 rebounds in Game 4, in which the Clippers never trailed.

Norman Powell posted 23 points off the bench for the Raptors, shooting six-of-11 from the field.

OG Anunoby had a double-double of 13 points and 13 rebounds, while Fred VanVleet finished with 21 points.

Brown, Tatum and Smart were the first trio of team-mates to have 20-plus points and 10-plus rebounds in the same playoff game since Larry Bird, Kevin McHale and Robert Parish achieved the feat for Boston in 1987, according to STATS.

Kemba Walker went two-of-11 from the field to post just five points in more than 51 minutes for Boston.

Leading the Western Conference semi-final 2-1, the Los Angeles Lakers look to pull further clear of the Houston Rockets on Thursday.