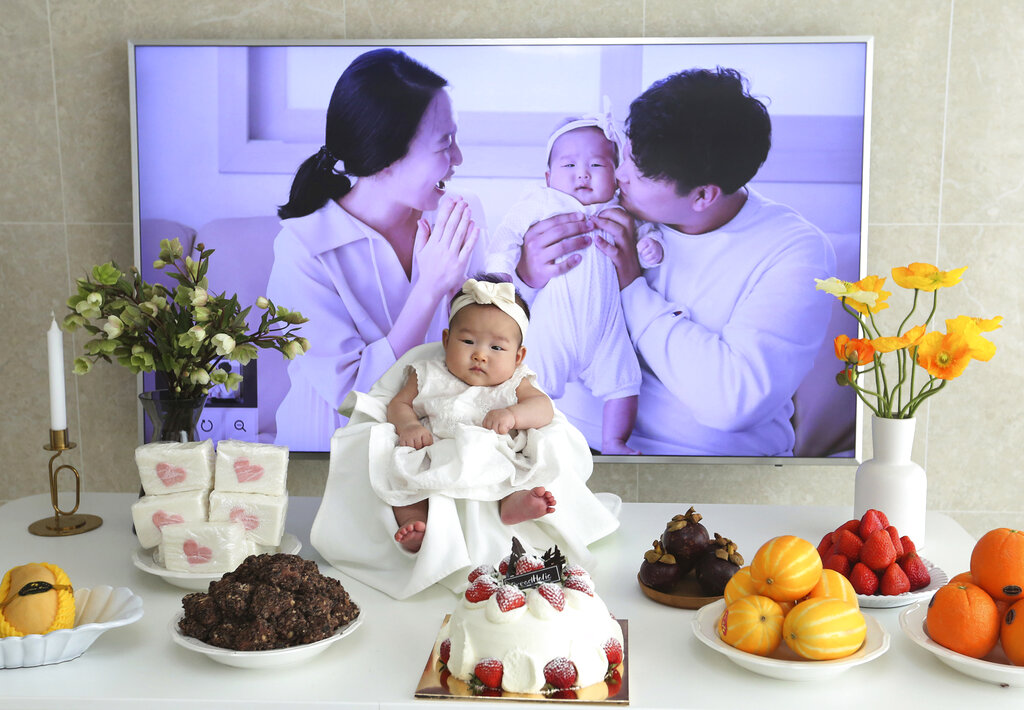 Just two hours after Lee Dong Kil's daughter was born on New Year's Eve, the clock struck midnight, 2019 was ushered in, and the infant became 2-years-old. She wasn't alone, though it happened for her quicker than most: Every baby born in South Korea last year became 2 on Jan. 1.

According to one of the world's most unusual age-calculating systems, South Korean babies become 1 on the day of their birth and then get an additional year tacked on when the calendar hits Jan. 1. A lawmaker is working now to overturn the centuries-old tradition amid complaints that it's an anachronistic, time-wasting custom that drags down an otherwise ultramodern country.

For parents whose babies are born in December, it can be especially painful. One hour after his daughter's birth in the central city of Daejeon at 10 p.m. on Dec. 31 of last year, Lee posted the news on social media. His friends immediately showered him with congratulatory messages.

"An hour later, when the New Year began, they phoned me again to say congratulations for my baby becoming 2-years-old," said Lee, who is 32 internationally but 34 in South Korea. "I thought, 'Ah, right. She's now 2 years old, though it's been only two hours since she was born. What the heck!'"

The origins of this age reckoning system aren't clear. Being 1 upon birth may be linked to the time babies spend in their mothers' wombs or to an ancient Asian numerical system that didn't have the concept of zero.

Becoming a year older on Jan. 1? That's even harder to explain.

It could be that ancient Koreans cared a lot about the year in which they were born in the Chinese 60-year cycle, but, without regular calendars, didn't care much about the specific day they were born; so they mostly ignored the day of their birth and instead marked another year of age on the day of the Lunar New Year, according to senior curator Jung Yonhak at the National Folk Museum of Korea.

This may have then shifted to the solar New Year on Jan. 1 as the South began embracing the Western calendar. North Korea uses the Western age calculating system, but they have a twist: they follow their own calendar that's based on the birth of national founder and president-for-life Kim Il Sung.

The year of your birth is still incredibly important in South Korea, and lumps those linked children together for life.

Other Asian countries, including Japan and Vietnam, abandoned the Chinese-style age system amid an influx of Western culture. Officially, South Korea has used Western-style calculations since the early 1960s. But its citizens still embrace the old-fashioned system in their daily lives because the government has done little to get people to change over to the Western style.

Most South Koreans are simply accustomed to living with two ages.

People don't hold massive joint birthday parties on New Year's Day; they just celebrate their birthday on the days they were born. Young people consider themselves another year old on solar New Year's Day (Jan. 1) while older people often use the Lunar New Year's Day. Many family restaurants don't charge babies if they are 36-months-old or younger, so parents often calculate their babies' ages under the Western method when they're dining out.

Some South Koreans still worry that the practice makes their nation look odd on the international stage. Some feel confusion when meeting with foreigners. Associated Press journalists in Seoul must ask Koreans what year and month they were born to calculate their Western age for news stories.

There are also some who say the concept of "Korean age" encourages a fixation on age-based social standing in this seniority-based country. In South Korea, those born in the same year often treat each other as equals, while people must use honorific titles to address those born earlier, rather than directly using their names.

Ahn Chang-gun, from the southeastern city of Gimhae, said he felt "empty" when his first child became 2 on Jan. 1, 2013, about two weeks after his wife delivered him after eight years of marriage. "He was this precious baby that we finally had, but I felt that all of a sudden two years had just gone by and yet I hadn't done anything for my baby," said Ahn.

Parents whose babies are born in December often worry about their kids falling behind other children born earlier in the same year, though worries gradually disappear as their children age.

When Seo Hyo Sun from Buchon, just west of Seoul, was taken to the hospital to get a cesarean section on Dec. 29, she couldn't stop weeping because her baby's due date was supposed to be Jan. 7.

"Tears kept flowing. ... My doctor told me the baby wanted to come out today so let's just celebrate," said Seo, 31 in international age. "When I awoke from my anesthesia, I felt really grateful ... because my baby was born healthy. That was enough."

"It is aimed at resolving confusion and inefficiency caused by the mixed use of age-counting systems," Hwang said in the proposed legislation.

Hwang's office said a parliamentary committee discussion and a public hearing on the issue are expected in coming months.

"If we use international age, things could get more complicated because it's a society that cares so much about which year you were born," said Lim KyoungJae, 46, head of the Seoul-based Miko Travel agency. "We should also definitely count the time of a baby being conceived and growing in its mother's womb."

Lim's employee Choi Min Kyung, who is 26 internationally and 28 in South Korea, disagreed.

"It's good to be two years younger ... (especially) when you meet men" on blind dates, Choi said with a laugh. "There is a big difference between 26 and 28."

North and South Korea say they plan bid for 2032 Olympics

Book on Trump raises worries in South Korea about alliance