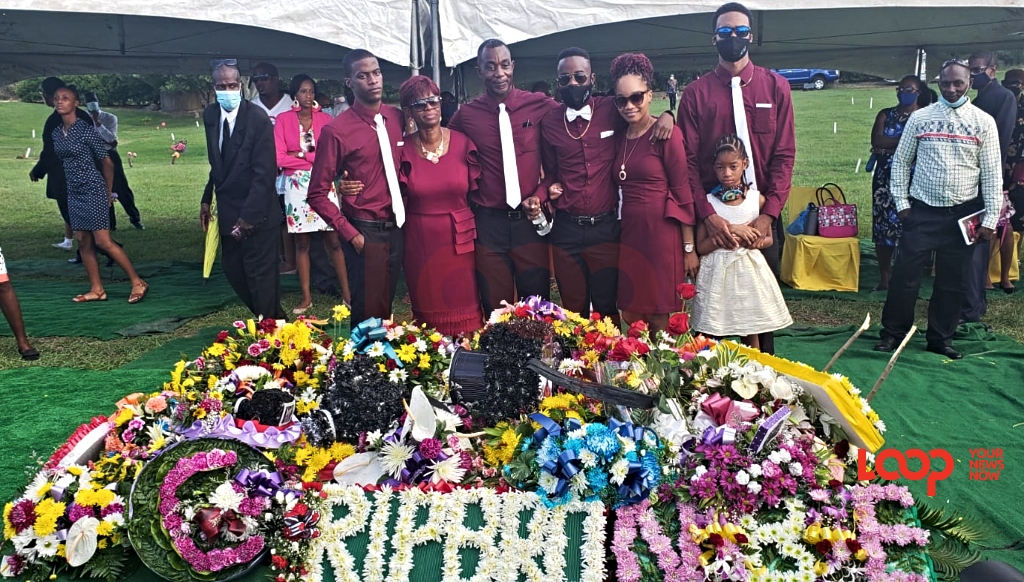 The 25-year-old photojournalist who was murdered in Barbados on June 22 has been laid to rest.

Trying to hold back tears after eulogizing his eldest son Christoff Griffith, Christopher Griffith said to his wife that their tripod is now down to two.

Whilst delivering the eulogy for his 25-year-old son, Christopher took the more than 600 attendees at the funeral service held at the Garfield Sobers Gymnasium in Wildey on a journey from Christoff the boy to the teen, young adult and man that he became.

Reminiscing about his son, "our son" to his parents, "Bajan Chris" to his gaming buddies, Christoff the lover of photography, Christopher focused his lens like his son used to and helped all gathered to see the clear picture behind Christoff the man.

Tragically taken after just a quarter-century of life, Christopher said even the annoying memories of his son will live on in the album of memories that he has in his heart.

Christopher said Christoff "touched the lives of so many persons in so many ways. . ." and therefore he left people from all spheres of Christoff's life with gold nuggets of advice.

Christopher told his son's Team Burger and Fries gaming buddies to focus on his laugher, "his Christoff way of doing things. There was never a dull moment when Bajan Chris was around." May you "never forget who is the greatest in the World, not you Mings!"

To his personal friends, family members and adopted mothers, he called on them to focus on Christoff's love, kind-heartedness, his smile, his warmth.

To his girlfriend, Tanika Cummings, "who I know he loved", cherish the fond memories.

To his brothers Chad and Chaquon, "Christoff loved you. . . He always had your best interests at heart. . . and remember what he always told you, 'Don't be like me, be a better man!' And I want you to promise yourselves today that you would do that for him."

And fighting back tears, to Christoff's loving mother Sonia, Christopher told his wife: "One of the legs of the tripod has passed. We will continue to support each other, love each other, one day at a time, one second at a time . . . our memories of Christoff will be forever."

No parent ever wishes to eulogise their child, but as he prepared his words for today's service (July 11), Christopher said that God gave him the strength to persevere.

The officiating minister was Elder Fitz Herbert Kirton who told the congregation that Christoff was taken 'suddenly' and each and every one of them could have their own suddenly at any moment. For as he preached, the homeowner in the Bible did not know when the thief would could so he could prepare and prevent it. So he called on all to make sure that Christoff's death was not in vain, make sure that it means something. "The unexpected is closer than we think . . . The Bible advises us to be constantly awake, aware and admonish . . . Do not be asleep to what God wants this death to say to you."

Roy Morris, the now Prime Minister Press Secretary, but Christoff's first boss in the world of journalism, paid tribute to Christoff calling him a unique photojournalist. Morris extended apologies on behalf of Prime Minister Mia Mottley whose schedule did not permit her attendance.

The United Holy Church of America (Barbados) Ensemble rendered Psalm 23 in a most moving manner and one member, Sheldon Hope sang a solo 'Great is thy faithfulness' at the request of Christoff's mom, Sonia Griffith.

Christopher Griffith, Sergeant 1059, saw his colleagues including the members of the Royal Barbados Police Force Band out in their numbers, just as was the case with the media fraternity.

Christoff was laid to rest at Coral Ridge Memorial Gardens. Media colleagues laid wreaths with cameras aplenty on them.

At the service Former Finance Minister Christopher Sinckler was in attendance, meanwhile the Minister of Information, Broadcasting and Public Affairs, Senator Lucille Moe was seen graveside.

May he rest in peace and rise in glory.