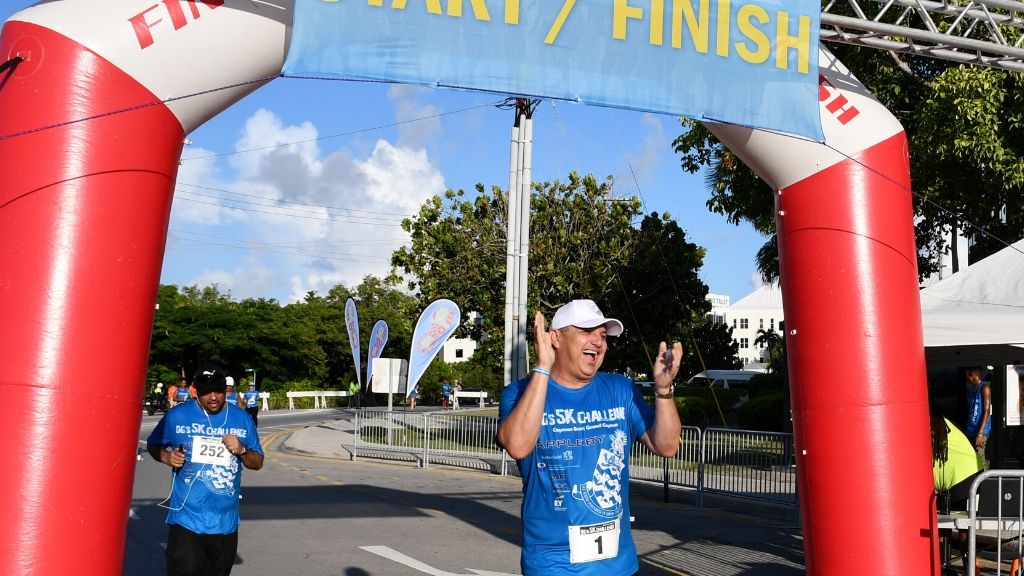 The Deputy Governor’s 5K Challenge is celebrating its seventh anniversary by returning to all three Cayman Islands.

Deputy Governor, Hon. Franz Manderson, personally leads the DG’s 5K Challenge. He explains he has selected this year’s charitable organisations because these charities and their programmes have a tangible effect on the community.

He adds: “Fundraising from this year’s DG’s 5K Challenge will contribute to reducing instances of cancer and provide meaningful care and support for those who suffer serious and debilitating diseases like MS, Alzheimer’s and Dementia. I encourage everyone living in the Cayman Islands to join us in April for as many of the three challenges as they can manage! Together, we really can help today and protect tomorrow.”

The Cayman Islands Cancer Society (CICS) explains that funds raised will be used to support the Society’s HPV vaccination programme, making the cancer-preventing vaccine accessible and free to all boys and girls in the Cayman Islands. This programme is vital in the fight to reduce incidences of cervical, ear, nose and throat cancers. Funds will also support ongoing public education and the CICS will continue to strive to screen, prevent and improve survivorship of cancer patients.

The MS Foundation of the Cayman Islands adds that their portion of the funds raised will be used to provide financial and emotional support to MS patients and their families. As there is no cure for the life-long disease, the Foundation aims to alleviate the long-term financial burden on patients brought by medication, doctors’ appointments, MRIs and other associated costs. The organisation is working to provide education to the community, while simultaneously creating a support network for the “MS warriors” to ensure they are well-served medically and emotionally while living with the disease.

The Alzheimer’s and Dementia Association of the Cayman Islands (ADACI) says that they are extremely honoured to be one of this year’s beneficiaries. Funds raised by the Challenge will be used primarily to launch the “Dementia Friends” programme, which is a far-reaching initiative that will include pre-schoolers. The respite care programme will also receive funds; together, these ADACI programmes will benefit the Cayman Islands through the provision of care and support, the elimination of verbal and physical abuse and the dispelling of stigma around the disease.

This year, the event has a fund-raising target of $70,000. Efforts are already underway to reach this ambitious goal, thanks to platinum sponsor Appleby, which has pledged a $15,000 donation.

Butterfield, Credit Union, Davenport Development and EY have also already come on board as gold sponsors again this year, with CINICO committing to sponsoring the half-way stop. At this time, sponsorship commitments have also been secured from PWC as water stop sponsor.

Last year, the event raised $82,000 for the Cayman Islands Crisis Centre, Alex Panton Foundation and Special Needs Foundation Cayman. In 2018, $89,000 was split among Feed Our Future, Meals on Wheels, Kiwanis Club of Grand Cayman, Kirckconnell Community Care Centre and Little Cayman Primary School. In 2017, $85,000 was raised to build a ropes challenge course for the YMCA of the Cayman Islands.

Prior to that, in 2016, the event netted $60,000 to help Cayman Heart Fund buy an ambulance, which was gifted to the Health Services Authority. In 2015, Special Olympics Cayman Islands was awarded $50,000 to help athletes attend the Special Olympic Games in Los Angeles the following summer. In 2014, the inaugural DG’s 5K Challenge raised $12,500 for Cayman HospiceCare (now known as Jasmine) towards its new premises on West Bay Road.

The DG’s 5K Challenge brings together civil servants, private sector employees and members of the public in a fitness and fundraising challenge. It is part of Mr. Manderson’s vision to have a healthier, more active and more socially engaged civil service, while also benefitting charitable organisations and initiatives in the Cayman Islands.

The DG’s 5K Challenge raises money through a combination of corporate sponsorship pledges and the registration fees of participants in the event.

Prospective participants can register on the CaymanActive website www.caymanactive.com/dg5k from 1 March.

Gentlemen encouraged to "walk in her shoes"