Silence around gender based violence: The Cayman context 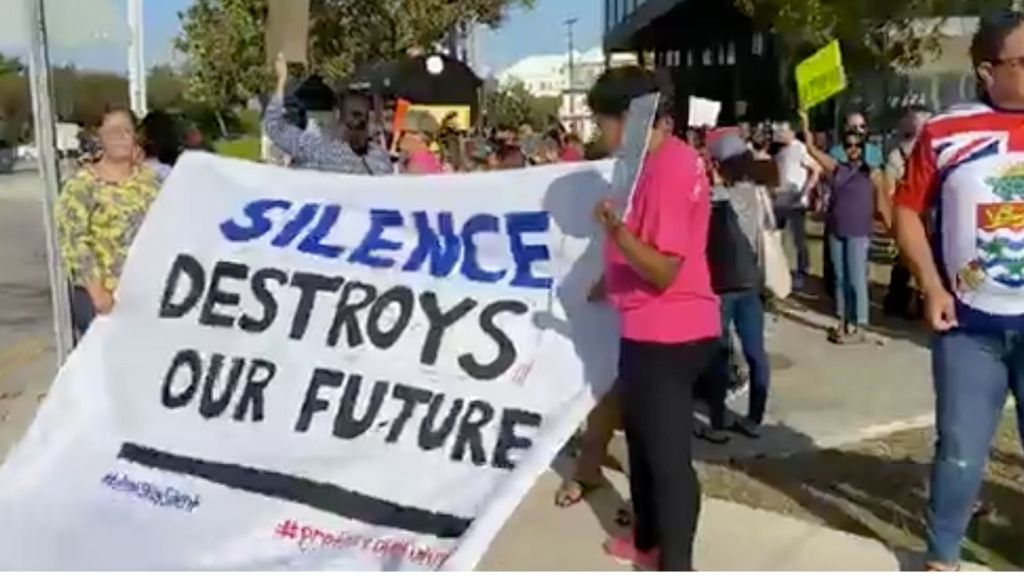 A scene from this morning's peaceful protest

On the cusp of Women’s History Month and International Women’s Day in March, the Cayman Islands must ask itself, what are the implications of silence around violence against women?

The Cayman Islands Crisis Centre, the island’s only shelter for victims of domestic violence, reveals that in Cayman, “the RCIPS responded to 2,218 domestic violence-related calls and 747 calls related to child protection in 2018. There is no way of knowing how many other assaults took place that were not reported.”

Figures from Centers for Disease Control surveys in the United States reveal that one in three women experience violence in their lifetimes, the vast majority of cases being male on female violence, and the majority of which go unreported.

This brings us to the case of current national relevance.

On February 21, the former Speaker of the House allegedly assaulted the female manager at the Coral Beach bar on Seven Mile Beach to which he responded with a statement stating that he had passed out and did not remember much of the incident, but apologised and subsequently announced that he would be taking a leave of absence as Speaker of the House, but would continue as an MLA.

In response to the incident, many Caymanians took social media, using the hashtag #sheisupported to convey support for the victim and a petition has been created on change.org to remove the speaker from public office.

Today, February 28, Caymanians congregated in front of the Government Administration Building in a peaceful protest organized by Angela Pretorius to raise awareness around gender-based violence, silence and in support of the victim.

But what does silence look like? And what are its implications?

Steve Smith once said, “silences are the most important voices.” History would show that this is indeed the case.

An Australian study found that 50 per cent of victims do not report cases of violence to the police. 11 per cent of those said that they did not because of embarrassment/ shame. In the case of sexual violence in the United States, under-reporting is estimated to be as high as 75 per cent. The implications are of course that victims do not get the physical, psychological or financial support that they need and perpetrators are not punished or reformed. This increases the chances for repeat offences and in the case of women, silence can lead to Post Traumatic Stress Disorder and other mental health issues as well as further and more severe violence and intergenerational cycles of violence, among other long-lasting repercussions.

Silence of families and communities

According to the Cayman Islands Crisis Centre, “The Cayman Islands, as every society in the world, has issues with violence. We are inundated by images of violence through entertainment, news and social media. Sometimes, it is fair to say, we have become anesthetised to it.” Although violence is not condoned in this society, many are aware of ongoing cases but choose not to get involved. Families and friends often feed into the problem through shame/ embarrassment, through complacency or blaming the victim. Many individuals still fail to grasp the complexity of this social problem and what needs to be done to confront it, and so they do and say nothing. According to the Cayman Islands Crisis Centre, 73 per cent of male abusers were abused as children.

A primary factor leading to the outrage surrounding last weekend’s alleged assault was the fact that only three of the nation’s leaders have made public statements surrounding the incident and there has been no official statement on gender-based violence since the alleged assault. North Side MLA, Ezzard Miller, has called for the former speaker’s resignation and has called on the Members of the Opposition to call a special meeting of the Legislative Assembly to debate a Motion of No Confidence in the Speaker and to elect a Deputy Speaker to replace Bernie Bush who has resigned in a statement against the "weakness of the Unity Government to take the morally right, rather than politically expedient, course of action.”.

The Cayman Island’s Crisis Centre has offered its support to the community. Victims of violence and their friends and family can visit their website at cicc.ky and perpetrators who acknowledge the need to reform can contact the Counselling Centre and/or the Department of Community Rehabilitation which provides rehabilitative services to adult offenders.

Police say senior member of government has assaulted a woman

Cayman: frontline workers should be tested every four weeks

Cayman: frontline workers should be tested every four weeks