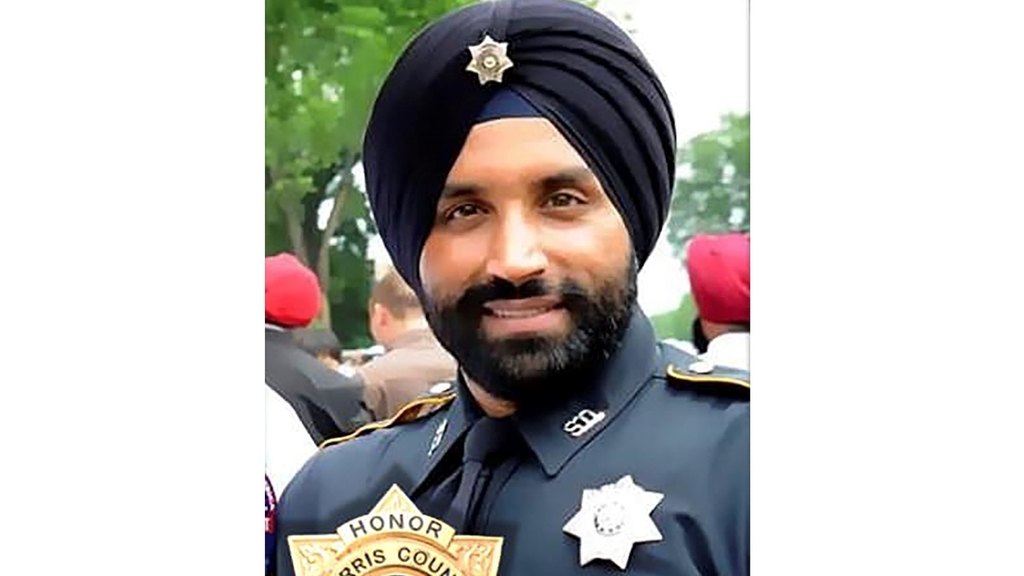 Sandeep Dhaliwal carried a badge and a gun while devoting his life to a faith that teaches love and peace.

Dhaliwal, who was fatally shot from behind during a traffic stop Friday, was the first Sikh sheriff's deputy on a force that includes the nation's fourth-largest city of Houston. Four years ago he won an accommodation to wear his turban and a beard while patrolling.

Friends said Dhaliwal (DAH'-lee-wahl), 42, was an example of how love-inspired service to others can tear down walls of distrust and misunderstanding.

"He was just a gem of a person. He was a beautiful soul," Simran Jeet Singh said Saturday. "Everyone who knew him admired him greatly."

A 47-year-old man with an extensive criminal history has been charged with capital murder in his death. Robert Solis (soh-LEES') was denied bond at a hearing early Saturday.

Authorities have not said what might have been his motive and there has been no suggestion that it was a hate crime. Solis was wanted on a warrant for violating parole.

The killing came at a time when the US has seen a string a mass shootings, including in El Paso and Odessa and Midland, Texas, prompting a fierce debate over easy access to guns.

The country also is riven over President Donald Trump's push for restrictions on immigration and efforts to build a wall on the southern border with Mexico.

Some friends of Dhaliwal said his life showed how the presence of multiple cultures and faiths can enrich the country.

"It's such a powerful message to send to the community that a man in a turban and beard is just as much American as you," said Singh, a senior religion fellow at the New York-based Sikh Coalition.

Even so, Dhaliwal's primary motivation was the ability to live his faith, said his friend Manpreet Kaur Singh.

"When you wear your articles of faith, you're telling the world 'I stand up for injustice, for people and for the greater good,'" said Manpreet, an attorney and Sikh Coalition board member.

Sikhism, a monotheistic faith, was founded more than 500 years ago in Southeast Asia and has roughly 27 million followers worldwide, most of them in India.

There are more than 500,000 Sikhs in the US Male followers often cover their heads with turbans, which are considered sacred, and refrain from shaving their beards.

Some were targets of anti-Islam violence following the 9/11 terrorist attacks, even though Sikhism is unrelated to Islam.

About 7,000 to 10,000 live in the Gulf Coast Region of the US, according to the Houston Chronicle. More than a half-dozen Sikh temples can be found in the region.

Dhaliwal was a member of the Sikh National Center in Houston, said its chair, Hardam Azad.

Azad said Dhaliwal often would speak with young people at the center, showing his sheriff's badge. A widely-shared video of Dhaliwal posted on the Facebook page of the Harris County Sheriff's Office showed him laughing as he allowed a boy to handcuff him and then unlock the handcuffs with the key.

"Ever since 9/11 happened, a lot of hate crimes have occurred against the Sikhs," Azad said. "The way to counter that was exactly the kind of service Sandeep Dhaliwal provided to the larger community."

Prior to Dhaliwal's hiring, Azad said the center had been in conversations with then-Sheriff Adrian Garcia to bring a Sikh onto the force.

Dhaliwal stepped up, he added.

"His passion for public service was obvious to us all," Azad said. "There are some people who live angry lives. He was anything but angry."

Dhaliwal's father was a police officer in India before moving his family to the United States. The deputy said in a 2015 interview that "serving in the police force is natural" to Sikhs who value service.

"Sikhs have been in this country for more than 100 years (but) we've been absent from the national conversation," Singh said. "One of the values of serving in uniform gives us a sense as a community that we are being seen and are being understood."

When Hurricane Harvey ravaged Houston, Dhaliwal joined others in the Sikh community to help feed those left homeless. Then when Hurricane Maria devastated Puerto Rico, he traveled there to help.

"There are just those people who come out passionate in the world, and you don't know what drives them," said his friend Manpreet. "He wanted to make sure he helped people. I had no idea what made him sacrifice his time."

Manpreet said Dhaliwal didn't fear being targeted because of his appearance but he did help ensure that Sikh places of worship were protected on Sundays by off-duty officers.

She said he also was deeply affected by the 2015 slaying of another deputy, Darren Goforth, who was shot and killed at a gas station while fueling his car. Dhaliwal "really jumped in and helped with the vigil, helped put together the memorial," Manpreet said.

Dhaliwal leaves a wife and three children, as well as his father and sisters, Manpreet said. She said his mother died last year.

She said she has a picture of him taken the day the policy change allowed him to wear his turban.

"He was so excited. I never had the foresight to see the possibility of him dying in line of duty."

Las Vegas pauses but looks ahead a year after mass shooting