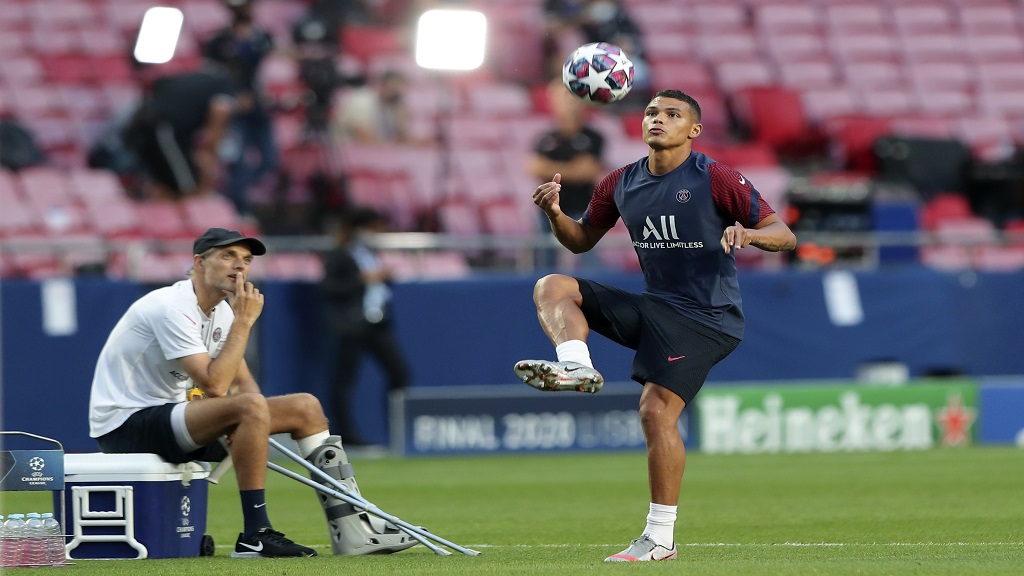 PSG's head coach Thomas Tuchel watches Thiago Silva play with a ball during a training session at the Luz stadium in Lisbon, Saturday Aug. 22, 2020. (Miguel A. Lopes/Pool via AP).

Chelsea have completed the signing of defender Thiago Silva on a free transfer following his release by Paris Saint-Germain (PSG).

The 35-year-old Brazil centre-back has signed a one-year deal with the option of a further 12 months in what will be his first experience of playing in the Premier League.

Silva is Frank Lampard's fifth signing ahead of the 2020-21 season following the arrivals of Hakim Ziyech, Timo Werner, Ben Chilwell and Malang Sarr.

He said: "I am so happy to be joining Chelsea. I am delighted to be a part of Frank Lampard's exciting squad for next season and I'm here to challenge for honours.

Chelsea director Marina Granovskaia said: "We are delighted to be able to add a player of Thiago Silva's proven world-class credentials to our squad.

"Having performed at the highest level for many years, we have no doubt his experience and quality will complement the many exciting talents we already have here.

"Thiago will be an excellent fit and we hope he can add some new trophies to his impressive list of honours."

Having emerged as one of the world's finest centre-backs at Milan, Silva joined PSG in 2012 for a reported €42million and went on to enjoy great success in France.

He was appointed club captain soon after arriving and went on to win seven Ligue 1 titles, five Coupe de France crowns and the Coupe de la Ligue on six occasions.

Most recently he helped PSG to a domestic treble in 2019-20, while they also reached their first Champions League final, but a narrow 1-0 defeat to Bayern Munich last Sunday prolonged their wait for a maiden triumph in Europe's elite competition.

That loss was Silva's final game for the club, as PSG sporting director Leonardo had confirmed in June that the defender was not being offered a new contract.

Silva announced after the defeat to Bayern that his agent had been in talks with Serie A side Fiorentina, though by that point media reports were already suggesting a Chelsea move was all but secured.

The signing of Silva is the latest signal of intent from Chelsea as they look to challenge for the Premier League title next season.

Germany international Kai Havertz has also been strongly linked with a big-money switch to the London club.