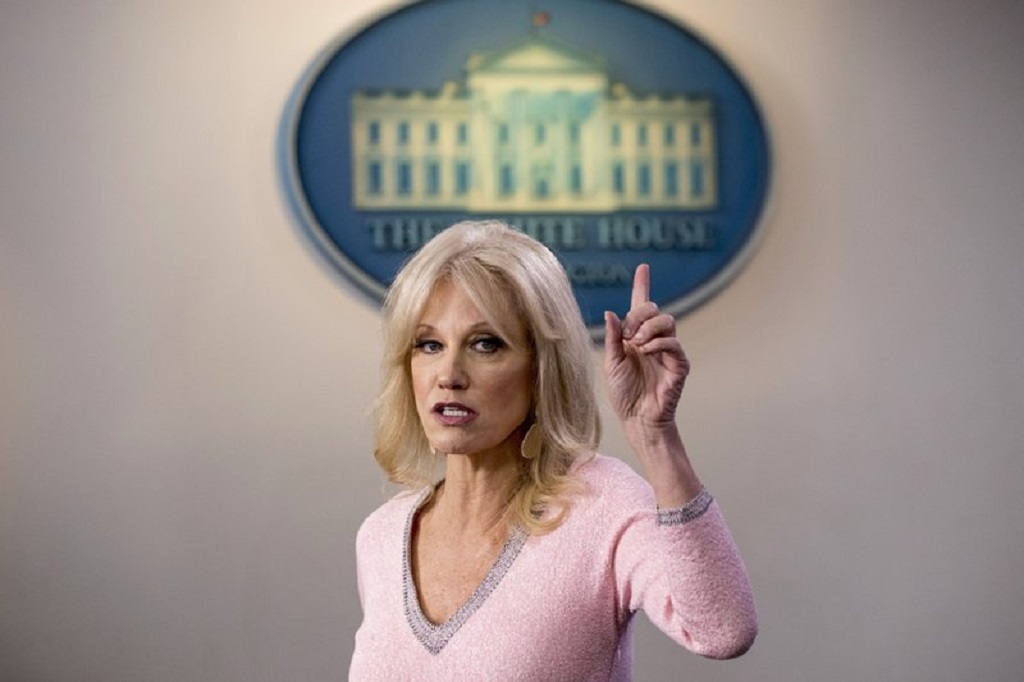 FILE - In this Dec. 5, 2019, file photo, Kellyanne Conway speaks in the Briefing Room at the White House in Washington. Conway, one of President Donald Trump’s most influential and longest serving advisers, announced Sunday, August 23, 2020, that she would be leaving the White House at the end of the month. (AP Photo/Andrew Harnik, File)

Kellyanne Conway, one of President Donald Trump's most influential and longest serving advisers, announced Sunday that she would be leaving the White House at the end of the month.

Conway, Trump's campaign manager during the stretch run of the 2016 race, was the first woman to successfully steer a White House bid, then became a senior counsellor to the president. She informed Trump of her decision in the Oval Office.

Conway cited a need to spend time with her four children in a resignation letter she posted Sunday night. Her husband, George, had become an outspoken Trump critic and her family a subject of Washington's rumour mill.

"We disagree about plenty but we are united on what matters most: the kids," she wrote. "For now, and for my beloved children, it will be less drama, more mama."

She is still slated to speak at the Republican National Convention this week. Her husband, an attorney who renounced Trump after the 2016 campaign, had become a member of the Lincoln Project, an outside group of Republicans devoted to defeating Trump.

The politically adversarial marriage generated much speculation in the Beltway and online. George Conway also announced Sunday that he was taking a leave of absence from both Twitter and the Lincoln Project.

Mark Meadows, Trump's chief of staff, said Monday that her departure leaves a "big hole" at the White House.

"This is all about making priority for family," Meadows told "CBS This Morning." "That's what this president is about and that's what Kellyanne Conway is about."

Her departure comes at an inopportune time for Trump, who faces a deficit in the polls as the Republican National Convention begins on Monday. Asked on CBS whether her departure signals a fear Trump might lose, Meadows called the question "cynical."

"Anybody who knows Kellyanne Conway knows that she has never shied away from a fight," Meadows said. "To suggest that is just not based on the facts."

Kellyanne Conway worked for years as a Republican pollster and operative and originally supported Sen. Ted Cruz in the 2016 Republican primary. She moved over to the Trump campaign and that August became campaign manager as Stephen Bannon became campaign chairman; Bannon was indicted two days ago for fraud.

Conway cited a need to help her children’s remote learning during the coronavirus pandemic as a need to step away from her position. She had remained a trusted voice within the West Wing and spearheaded several initiatives, including on combating opioid abuse.

She was also known for her robust defence of the president in media appearances, at times delivering dizzying rebuttals while once extolling the virtues of "alternative facts" to support her case.

Conway was also an informal adviser to the president's reelection effort but resisted moving over to the campaign.

Her exit was first reported by The Washington Post.

Biden vows to defeat Trump, end US  'season of darkness'