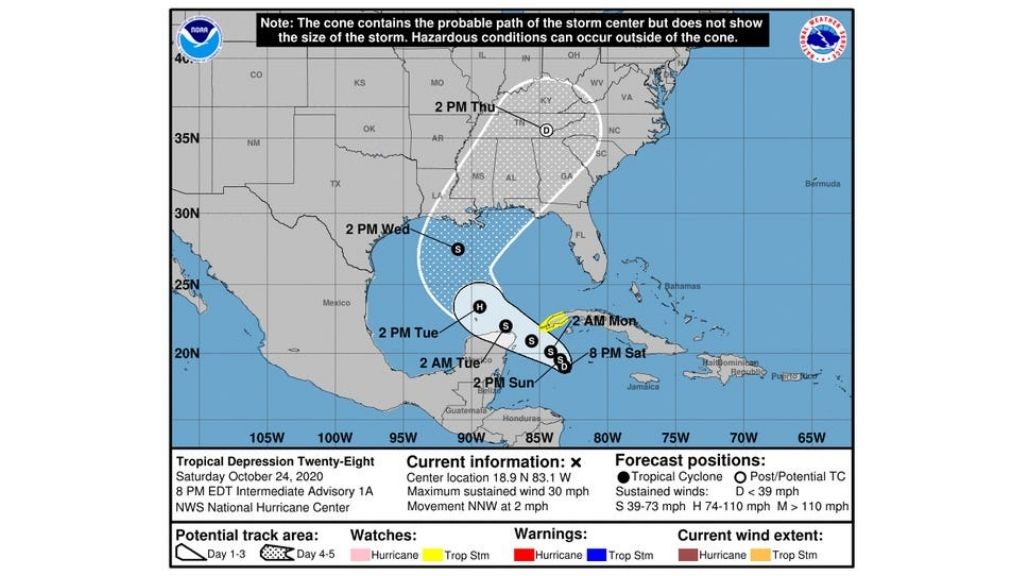 Tropical Depression Twenty-Eight has formed in the Caribbean Sea near Grand Cayman and is forecast to keep strengthening on a course toward the Gulf of Mexico.

At 800 pm EDT, the center of Tropical Depression Twenty-Eight was located near latitude 18.9 North, longitude 83.1 West. The depression is moving toward the north-northwest near 2 mph (4 km/h), and this motion is expected to continue through early Sunday.

The system should gradually turn toward the west-northwest with a faster forward speed by Monday. On the forecast track, the center of the depression is expected to remain south of western Cuba tomorrow and approach the Yucatan Channel or Yucatan Peninsula late Monday before emerging over the southern Gulf of Mexico on Tuesday.

Across portions of central and western Cuba, the Cayman Islands, Jamaica, the northeast Yucatan Peninsula of Mexico, southern Florida and the Florida Keys, storm total rainfall of 4 to 8 inches with local amounts of 12 inches are possible through Wednesday.

Maximum sustained winds are near 30 mph (45 km/h) with higher gusts. Slow strengthening is forecast during the next 72 hours, and the system is expected to become a tropical storm on Sunday and could become a hurricane over the southern Gulf of Mexico on Tuesday.

The next name of the 2020 Atlantic Hurricane season is Zeta. Once named, it means that 2020 would tie 2005 for the most named storms in a season.

There is a Tropical Storm Watch in effect for western Cuba and where tropical storm conditions, including heavy rainfall, could arrive as early as Monday.

Here are key messages on newly-formed Tropical Depression 28. A Tropical Storm Watch is in effect for western Cuba and there is also a risk of tropical storm conditions in the northern Yucatan Peninsula Monday night and Tuesday. https://t.co/tW4KeFW0gB pic.twitter.com/pAbkAtohWH