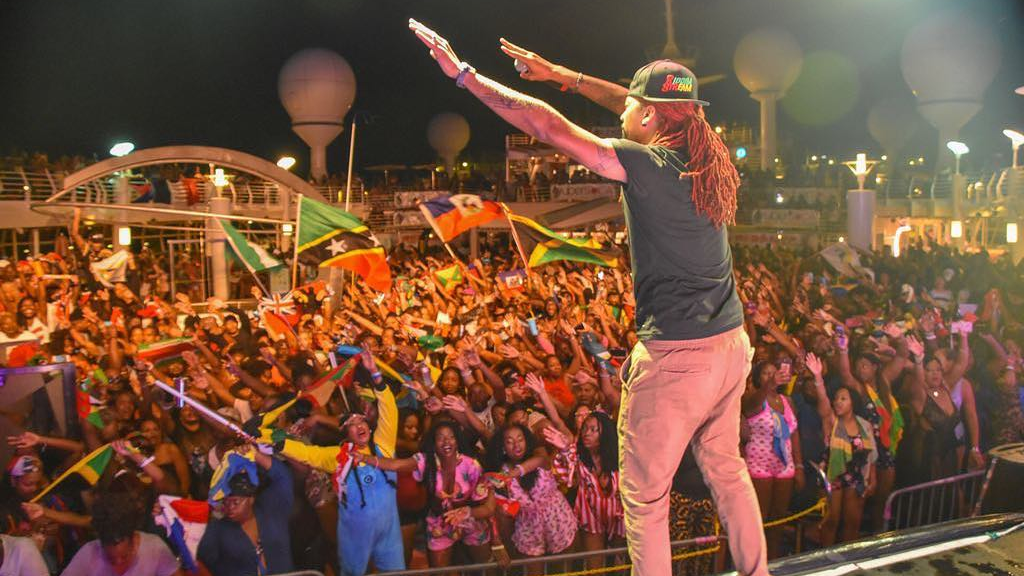 Ubersoca is claiming the title of Largest Music Festival at Sea with over 7000 patrons on two sold out cruises this year.

Ubersoca Cruise is now claiming the title of Largest Music Festival at Sea.

This, following the event's fifth year in which they sold out two back to back cruise ships.

In a release, Ubersoca said they welcomed over 7,500 Soca lovers from around the world including Australia, Kuwait, Poland, France, Sweden, Japan, UK, USA, and the Caribbean.

Passengers were treated to an experience beyond the music with over 50 events including concerts, workshop events, after-parties, two J’ouvert, formal dinners, sporting activities, chef competitions and so much more.

"Whether it’s the infamous Mr. Killa crowd surfing on a bed mattress, or USC’s epic J’ouvert experience in Grand Turk, USC continues to redefine the meaning of the word VIRAL with video views of the event going into the millions," said the release.

"Since its inaugural sailing in 2016, over 16,000 people have traveled with Ubersoca Cruise to partake in what can only be described as a bucket list ‘experience beyond the music’. It’s hard to believe that we’ve had 5 years of Ubersoca. The cruise with a cult following now has its sights on its five-year anniversary and plans have already been set in motion for another epic installment of the cruise."

Below is and Question and Answer with Ubsersoca creator Nathaniel Turner.

Q. What has been the most memorable moment since the launch of Ubersoca Cruise?

A. There have been so many, but when the ship started moving for the first time during our inaugural sailing in 2016, I breathed a huge sigh of relief! We were under so much pressure and stress in year one that it was such a relief to actually see the boat start moving and soca music start playing! I remember walking up to the ship (on embarkation day), looking up and saying to myself “What the Halifax were you thinking?!”


Q. Did you imagine Ubersoca Cruise would grow as quickly as it did and what do you attribute to the success of the brand thus far?

A. Not in our wildest dreams! I think I was a bit naïve to think that the cruise would sell out within days/weeks. For those that sailed with us in 2016, they know, all too well, that didn’t happen by a longshot! We could barely fill a ship in year one so we winged it, for the most part, had the time of our lives and then dared to do it again!

Fast forward four years later, USC has gone from the smallest cruise ship charter to being the biggest, hypest and best cruise ship charter on the Ocean. It’s humbling to see Soca music (which is scarcely recognized as its own genre), manifest its unrivaled energy and become the biggest theme cruise in the world, bigger than EDM, Reggae, Hip-Hop. It truly shows the power of Soca when we come together as a family. USC didn’t achieve this alone. We attribute our success to the collective talent and power of our entertainers and their loyalty to the brand and vision.

Q. For those who haven't sailed with Ubersoca Cruise, what can you tell them about the experience?
A. Ubersoca Cruise is something you truly have to experience first-hand to understand! We Nah Normal! USC is a different type of beast; it has its own brand of energy! We simply unleash the beast and let it run wild! The one consistent comment that we get is that Ubersoca Cruise changes lives. It changed my life forever and I will always be grateful for the Family and fraternity that we have created.

Q. How many people do it really take to organise two back to back full cruise ship charters?

A. A village and a small Army! We have been blessed with a core team of five-star Generals and a dedicated team of volunteers with hearts of gold. The core team consists of myself, Jodi Lewis and Daniel Reece. According to them, I dream up crazy outrageous and ridiculous ideas and they do their level best to either make it happen or talk me down off the ledge! I’ll never admit it, but Jodi keeps us in line and on point. Together, as a team, we make it hard to spot the General, because we all work like soldiers!

Q. What was the most challenging obstacle Ubersoca Cruise has faced and how did the organisers overcome that obstacle?

A. Year one on the whole was the single biggest challenge we have faced as a Team! We were an unknown entity with a concept that many were initially reluctant to embrace or take seriously. We had to establish credibility, sell the concept, attract the best talent, build a brand within a truncated timeframe, all while selling cabins in a culture that thrives on being last minute. Yes, I said it! It resulted in many sleepless nights, heart palpitations and several grey hairs. Thankfully, my hairline is still relatively intact! Daniel, not so much!

Q. If you knew what you know now, what would you have done differently in 2015 when you started Ubersoca Cruise.

A. Take up fishing or pottery instead! On the real, I wouldn’t change a thing! USC has been the greatest and scariest rollercoaster ride I’ve ever been on. Looking forward to where the ride takes us next!

Q. Can you give us a hint about 2020? The destination, dates, ship, three boats, anything?

A. I’m sworn to secrecy! Our team undergoes weekly hypnosis to wipe our minds clean of any details regarding USC 2020 (just in case either one of us is captured and/or tortured for information!) Ship three?
What Ship three?! I refuse to even share the details with my mother, for fear that she might inadvertently disclose information in one of her prayer groups! I love you Mom!

Q. If people want to experience Ubersoca Cruise, what is the best way for them to do so?

A. With no inhibitions! There’s no judgment on USC. We are a family that parties together and stays together no matter where we go. Wear a USC hat anywhere and you will realise how amazing and great our extended family is. The beauty about USC is that we are more than just a party cruise, we curate our own industry seminars, DJ classes, exercise classes, comedy shows, sports events, impromptu jam sessions, pop-up elevator fetes. Ice skating on a cruise ship to Soca music is now normal for us .Next – sky diving!

Q. Ubersoca Cruise is now known as Last Carnival of the Year. Did you expect it to be acknowledged on the same level as a Caribbean Carnival?

A. Never! Ubersoca has exceeded our wildest imaginations! We’ve quickly realised that Ubersoca Cruise is waaay bigger than us. The movement has taken the smaller islands by storm and helped the bigger islands to give their artists the recognition that they have always deserved. Big Island and Small Island Artists now use it as a springboard for new music and are able to create and collaborate in ways they’ve never done before. We’re just trying to create a long-lasting legacy for Soca And with that as our goal, we shall always aspire.

Q. Finally, the entertainment that Ubersoca Cruise selects, what is the formula? How does the USC Committee select entertainment for the cruise?

A: E = mc2  Simply put, we gather the best talent in the world, provide an all-inclusive platform and then we get out of the way and let our entertainers create organic magic. Watching it all unfold is an amazing sight to behold!

UberSoca Cruise: The CARICOM of the soca experience