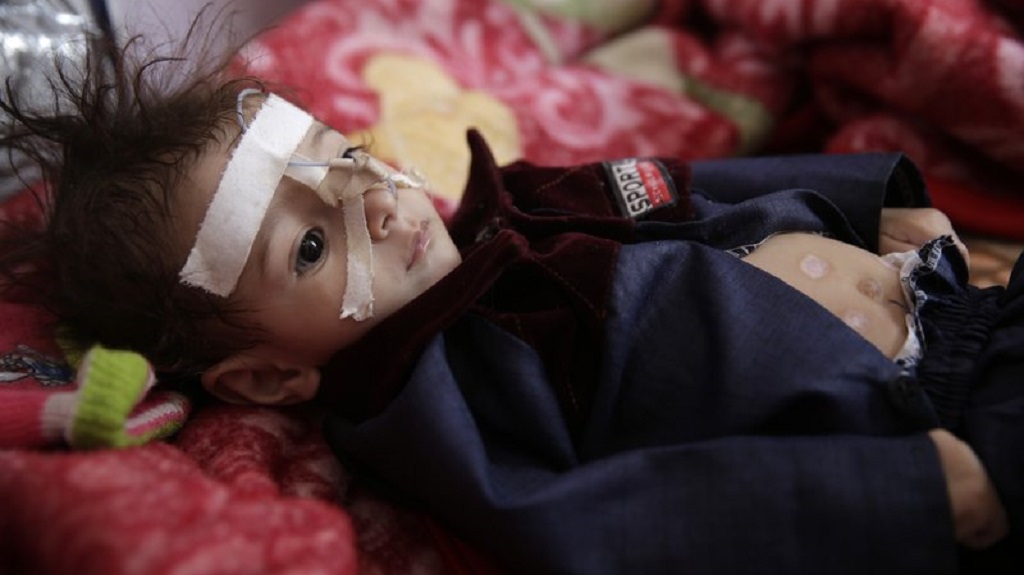 FILE - In this November 23, 2019 file photo, a malnourished boy lies in a bed waiting to receive treatment at a feeding center at Al-Sabeen hospital in Sanaa, Yemen. The UN children’s agency has appealed for an additional $92.4 million to help fight the coronavirus in the Middle East and North Africa. The economic downturn linked to the outbreak is expected to push an additional 4 million children into poverty. (AP Photo/Hani Mohammed, File)

The UN children's agency appealed Monday for an additional $92.4 million to help fight the coronavirus pandemic in the Middle East and North Africa, a conflict-battered region with the highest number of children in need anywhere.

Yemen is a top concern, said Ted Chaiban, the regional chief of UNICEF. After five years of civil war, half the health centres in Yemen no longer operate. Two million children are malnourished, including 400,000 who suffer from severe acute malnutrition.

"If you don't get support to them every month, you have a 50% increase in the mortality rate among those children (with severe malnutrition)," Chaiban told The Associated Press. "It was already critical to address the needs of children in Yemen. With COVID-19, now you've got this extra layer of vulnerability."

So far, there has only been one confirmed coronavirus patient in Yemen, but testing capabilities are limited and there are concerns the virus might be spreading undetected.

More than 218,000 infections have been reported in the region, including close to 8,000 deaths, the vast majority of them in Iran.

Chaiban said the additional funding is needed for a range of programs across the region to soften the blow of the pandemic.

In addition to its regular nutrition and immunization services, the agency is helping to establish isolation centres and improve water and sanitation.

UNICEF is also running awareness campaigns about social distancing and hygiene, which are particularly difficult in crowded neighbourhoods and refugee camps, he said.

Before the pandemic, some 25 million children in the region were in need of humanitarian aid.

UNICEF estimates that an additional 4 million children are being pushed into poverty, as millions of adults in the Middle East and North Africa lose their income due to nationwide lockdowns meant to fight the pandemic, Chaiban said.

The many ironies of COVID-19... Are we really all in this together?

Worst-case scenario: 52,000 of Cayman's residents would get COVID-19

Elections Office facilitating the process to get Caymanians to vote

Elections Office facilitating the process to get Caymanians to vote