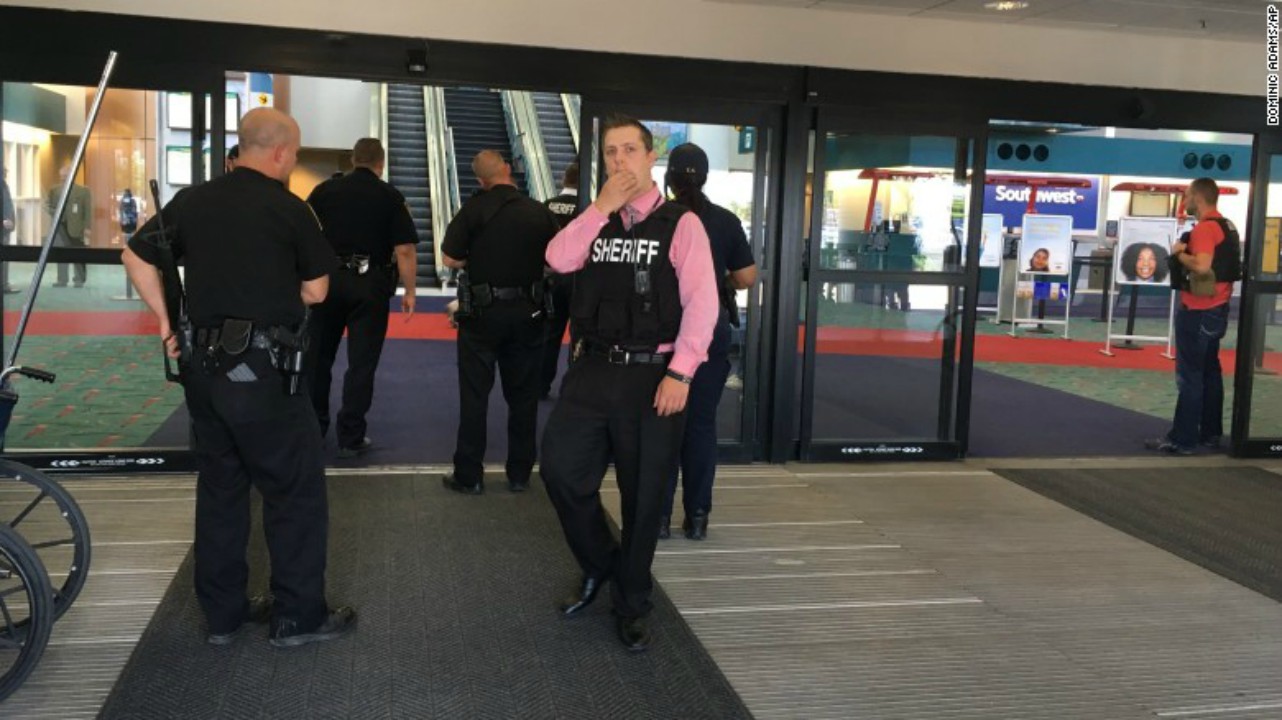 Police officers at the terminal at Bishop International Airport. (CNN.com)

A Canadian man from Tunisia shouted in Arabic before stabbing a police officer in the neck at a Michigan airport, and referenced people being killed overseas during the attack that's now being investigated as an act of terrorism, federal and court officials said.

Amor Ftouhi, 49, of Montreal, was immediately taken into custody. A criminal complaint charging him with committing violence at an airport says Ftouhi asked an officer who subdued him why the officer didn't kill him.

The attack Wednesday at Bishop International Airport in Flint, Michigan, is being investigated as an act of terrorism, but authorities have no indication at this time that the suspect was involved in a "wider plot," said FBI Special Agent in Charge David Gelios.

"At this time we view him as a lone-wolf attacker," Gelios said. "We have no information to suggest any training."

The criminal complaint says Ftouhi stabbed airport police Lt. Jeff Neville with a large knife after yelling "Allahu akbar," the Arabic phrase for "God is great." According to the FBI, Ftouhi said something similar to "you have killed people in Syria, Iraq, and Afghanistan, and we are all going to die."

More charges against Ftouhi could be filed as prosecutors take the case to a grand jury seeking an indictment, Gelios said. The Flint Journal, citing court officials, said that Ftouhi is a dual citizen of Canada and Tunisia.

Neville was in satisfactory condition after initially being in critical condition, airport police Chief Chris Miller said at a Wednesday afternoon news conference where the charge against Ftouhi was announced.

Ftouhi appeared in federal court in Flint to hear the charge and will get a court-appointed attorney. A court spokesman says Ftouhi will remain in custody until a bond hearing next Wednesday.

The attack occurred just before 10 a.m., prompting officials to evacuate and shut down the airport and add security elsewhere in the Michigan city about 50 miles (80.46 kilometers) northwest of Detroit. White House press secretary Sean Spicer said President Donald Trump was briefed on the stabbing, and U.S. Attorney General Jeff Sessions said he was "proud of the swift response" by authorities from both the U.S. and Canada.

Police in Canada were searching a Montreal apartment. Montreal police spokesman Benoit Boiselle said officers with their department were assisting the Royal Canadian Mounted Police in the search on behalf of an FBI request.

Boiselle said three people staying at the residence had been taken in for questioning.

Luciano Piazza, the building landlord, said Ftouhi was not a difficult tenant and that he is married with children.

"I never had any problems with him," Piazza said. "I'm really surprised. I would see him at least once a month, when he paid his rent."

Gelios said Ftouhi legally entered the U.S. at Champlain, New York, on June 16 and made his way to the Flint airport on Wednesday morning.

Ftouhi spent some time in public, unsecured areas of the airport before going to a restroom where he dropped two bags before attacking the officer with a 12-inch knife that had an 8-inch serrated blade, Gelios said.

Ftouhi never went through any security screening, Gelios said. He described Ftouhi as "cooperative" and talking to investigators.

Witnesses described seeing the suspect being led away as Neville was bleeding, a knife on the ground.

"The cop was on his hands and knees bleeding from his neck," Ken Brown told The Flint Journal. "I said they need to get him a towel."

Cherie Carpenter, who was awaiting a flight to Texas to see her new grandchild, told Flint TV station WJRT she saw the attacker being led away in handcuffs. She described the man in custody as appearing "blank, just totally blank."

Miller, the airport chief, said Neville "fought him to the end," managing to stop the stabbing and bring Ftouhi to the ground as Miller and other officers arrived to help.

After the stabbing, officials stationed police officers at Flint City Hall a few miles away. Mayor Karen Weaver said in a release the situation was "under control" but that officials sought to take "extra precautions."

Neville retired from the sheriff's office as a lieutenant.