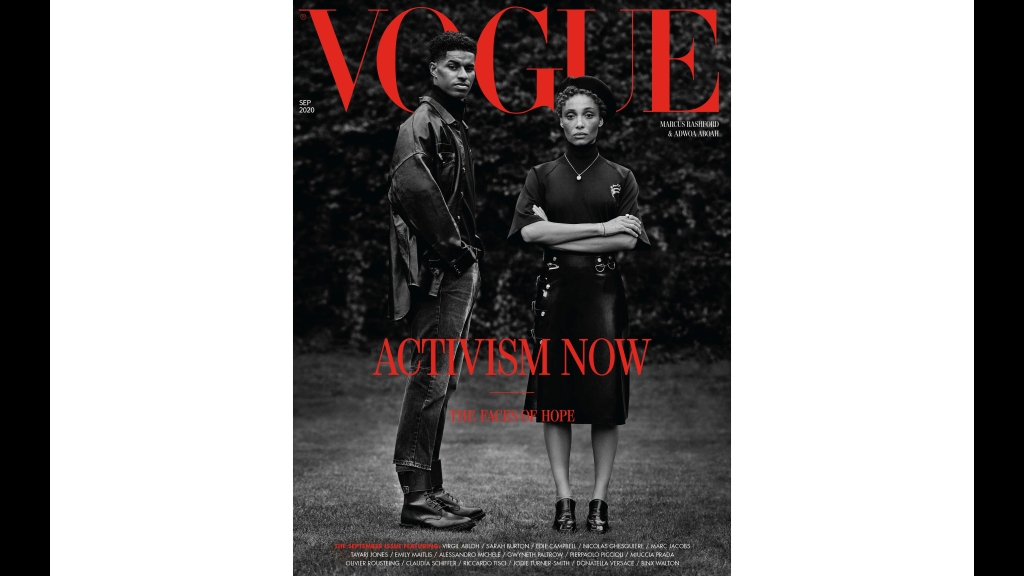 In this image made available Thursday Aug. 6, 2020, by British Vogue magazine, showing the September 2020 issue devoted to activism, with a cover featuring two Black activists and produced by a predominantly Black team. (Original photography by Misan Harriman/Vogue Magazine via AP)

The British issue of Vogue is devoting its September issue to activism, with a cover featuring two Black activists and produced by a predominantly Black team.

Editor-in-chief Edward Enninful, who is Black, said he wanted the magazine's new issue, to be published Friday, to be a "rallying cry for the future." He said 2020 is a "moment of necessary change," and told the BBC that the focus on activism was a "no brainer" decision.

The cover features 22-year-old Manchester United soccer star Marcus Rashford, who in June successfully campaigned to force Britain's government to grant free food vouchers to poor families during the summer holidays. He posed alongside model and mental health activist Adwoa Aboah. They were photographed by Misan Harriman, the first Black photographer tasked with shooting the magazine's September issue — traditionally seen as the most important one in the Vogue calendar.

"(Enninful) knows that there are many talented people from a diverse background who have never had a fair chance, finally the door is ajar," Harriman said.

The fold-out cover features 18 other faces, including campaigners for the Black Lives Matter movement, feminists and anti-racism activists.

Enninful said last month that he was "racially profiled" by a security guard at his office, who told him to "use the loading bay" as he arrived for work. He said that the incident highlighted how despite his achievements, "the first thing that some people will judge you on is the color of your skin."

Last year, the September issue of British Vogue was guest-edited by Meghan, the Duchess of Sussex. resources for those in need.