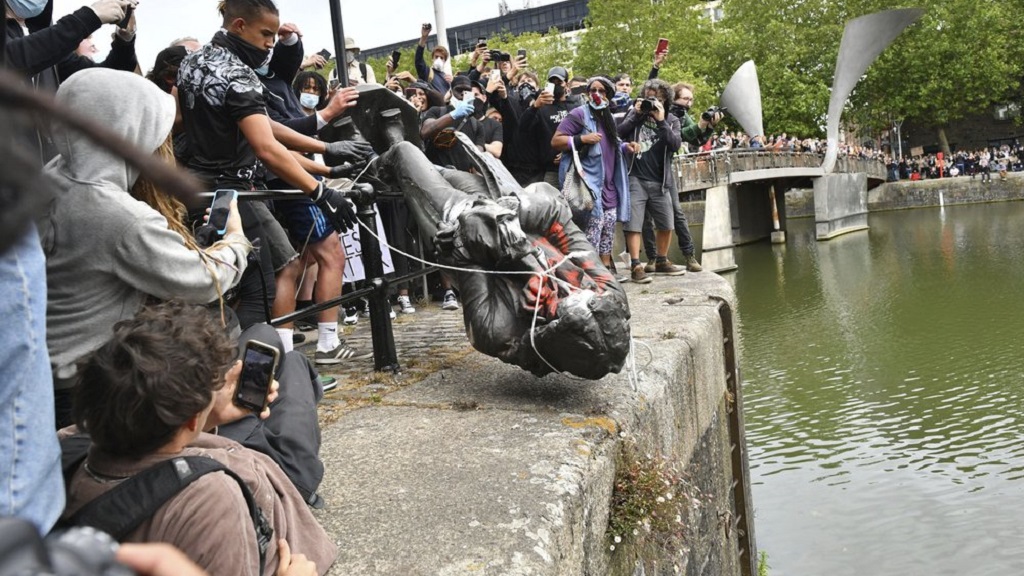 Protesters throw a statue of slave trader Edward Colston into Bristol harbour, during a Black Lives Matter protest rally, in Bristol, England, Sunday June 7, 2020, in response to the recent killing of George Floyd by police officers in Minneapolis, USA, that has led to protests in many countries and across the US. (Ben Birchall/PA via AP)

For someone who died nearly three centuries ago, Edward Colston has become a symbol for the Black Lives Matter movement in Britain.

The toppling of his statue in Bristol, a city in the southwest of England, on Sunday by anti-racism protesters was greeted with joyous scenes, recognition of the fact that he was a notorious slave trader — a badge of shame in what is one of Britain's most liberal cities.

Demonstrators attached ropes to the statue before pulling it down. Footage of the moments after the statue crashed to the ground saw hundreds, if not thousands, of local Bristolians in ecstasy.

Images on social media showed protesters then appearing to kneel on the neck of the statue for eight minutes, recalling how George Floyd died in Minneapolis on May 25. The statue was then rolled into the nearby Bristol Harbour — again to rapturous scenes.

Police said officers have launched an investigation and are looking for those who "committed an act of criminal damage."

The symbolism of the statue's demise can't be overstated not least because the bridge overlooking its new resting place is named Pero's Bridge, after Pero Jones — an enslaved man who lived and died in the city in the latter part of the 18th century.

Colston, who was born in 1636 to a wealthy merchant family, became prominently involved in England's sole official slaving company at the time, the Royal African Company, and Bristol was at the heart of it.

The company transported tens of thousands of Africans across the Atlantic Ocean, mainly to work the sugar plantations in the Caribbean and cultivate the tobacco fields that were burgeoning in the new North American colony of Virginia. Each enslaved person had the company's initials branded onto their chest.

Bristol, as an international port, was at the centre of the slave trade and benefited hugely financially — not just shipbuilders and slavers, but also investors like Colston, who would buy a stake in the triangular slave voyage between England, West Africa and the Caribbean.

The bronze memorial, which had been in place since 1895, had been the subject of an 11,000-strong petition to have it removed. Residents, including the city's big community that hails from the Caribbean, are ashamed of what Colston represents.

Colston has been a figure of huge controversy in Bristol with attempts made to rename Colston Hall, the biggest music venue in the city among many efforts to "decolonize" the city.

Colston gave a lot of money to local charities and that helps explain why his name dons so many public buildings in the city, including educational and economic institutions.

Britain formally abolished the slave trade in 1807 by an Act of Parliament but slavery itself was only formally outlawed in British territories in 1834. Overall, more than 12 million Africans are estimated to have been exported to the New World, of whom around 2 million are believed to have perished en route.

The watery end of the Colston statue wasn't the only historic sculpture to have been targeted by protesters.

In the Belgian capital of Brussels, where thousands joined a Black Lives Matter rally, protesters clambered Sunday onto the statue of former King Leopold II and chanted "reparations," according to video posted on social media.

The word "shame" was also graffitied on the monument, reference perhaps to the fact that Leopold is said to have reigned over the mass death of 10 million Congolese. A bust of Leopold's in the city of Ghent has also been defaced, daubed in red paint and covered with a cloth scrawled: "I can't breathe."

Leopold's ruthless early rule over Congo from 1885 to 1908 is notorious for its brutality when the Congo Free State was practically his personal fiefdom. After Leopold handed over Congo to the Belgian state, the tiny nation continued to hold sway over an area 80 times its size half a world away, until independence in 1960.

And in Virginia, Governor Ralph Northam has pledged to remove the General Robert E. Lee Lee statue, and city leaders have committed to taking down the other four Confederate memorials along Richmond's prestigious Monument Avenue.

Report: 3 more officers to be charged in George Floyd's death