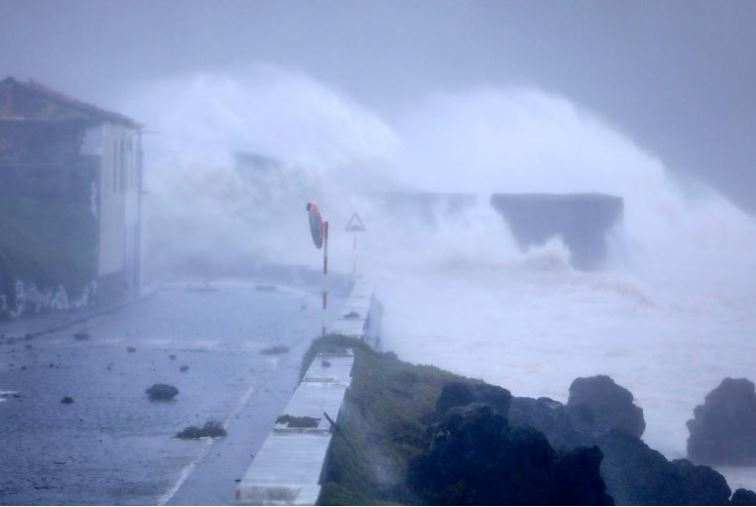 Hurricanes the size of Lorenzo are rare so far north and east in the Atlantic basin. Lorenzo is producing huge swells across the North Atlantic as it moves northeast toward Ireland and the United Kingdom and weakens to a Category 1 hurricane.

The U.S. National Hurricane Centre in Miami said swells generated by Lorenzo were being felt along the eastern coasts of the United States and Canada, in the Bahamas, and in parts of western Europe. The swells are bringing life-threatening surf and rip currents, it warned.

It said Lorenzo is "likely be a fairly vigorous cyclone" when it reaches Ireland late Thursday.

The UK Met Office forecast "very strong winds and heavy rain" for western areas of the country on Thursday and Friday.

The Portuguese weather agency said the most affected islands in the Azores archipelago were Flores and Corvo, where weather stations reported gusts of up to 163 kph (101 mph) — lower than forecast as Lorenzo lost some power over cooler water.

Portuguese Prime Minister Antonio Costa said he had spoken to Azores officials at daybreak and the hurricane risk had peaked without major incident.

"Fortunately, everything indicates that things have not turned out as badly as we feared," Costa told reporters in Lisbon.

Azores Civil Protection Agency chief Carlos Neves said 39 people were safely evacuated and no injuries were reported. He said the main port on the island of Flores had suffered "grave damage" as part of the dock, the port's building and some cargo containers had been "swallowed" by the sea.

Around 250,000 people live on the Azores' nine volcanic islands and the archipelago is a popular tourist destination, famed for its lakes, mountains and volcanic craters.

Authorities in the archipelago placed seven islands on red alert as Lorenzo approached. School classes were cancelled and government offices were closed as people were told to remain indoors Wednesday.

Azores airline SATA cancelled all flights to the archipelago, and some islands closed their ports.

Cat 5 hurricane unprecedented for being so far north, east

Still reeling from Dorian, Bahamas hit by another tropical storm