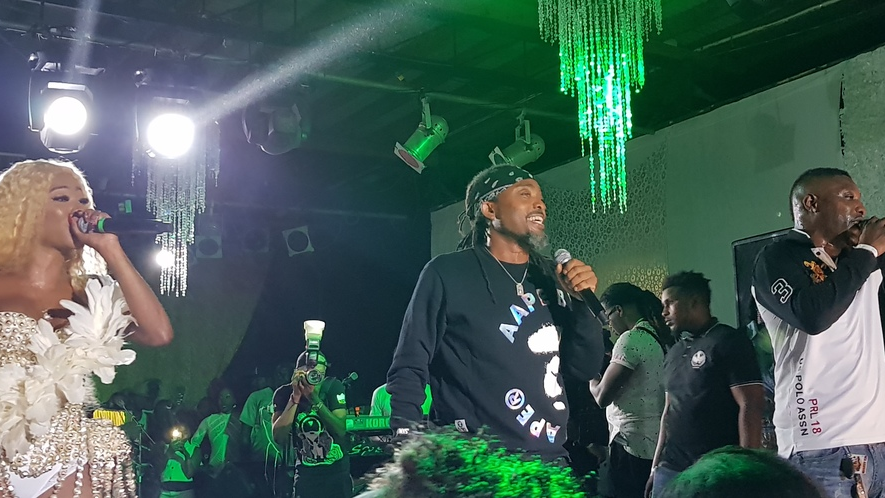 Patrice reuniting with Machel Montano and Kernal Roberts, who introduced her to Montano, was one of the highlights of the night.

Patrice Roberts proved her strength as a soca artiste on Thursday night when she starred in her debut concert, Strength of a Woman.

Held Under the Trees at Normandie, the concert sealed Roberts’ place as one of the top soca acts coming out of Trinidad and Tobago and the Caribbean.

With 14 songs released for Carnival 2019, Roberts’ has built up a catalog of songs that kept the crowd pumping all night along with her older songs.

The show traced a Roberts’ musical journey from a shy girl from Toco to soca star and at times proved emotional.

One particularly poignant moment was when she paid tribute to her daughter Lily and shared with the audience how she felt when she found out she was pregnant and how her life has changed since she had her daughter.

Lily was brought on stage by her father, fellow soca artist Ricardo Drue, to the strains of the Xavier Sisters on violin while Roberts’ sang her ode to her daughter ‘Diamond in my Heart’, her voice breaking during the song.

“This was the happiest moment in my life when I had my daughter. I was so scared, I remember running round my house a million times when I found out I was pregnant,” she said.

“My daughter is the greatest gift,” she said stating that she had the most respect for her mother, who was standing backstage, and others.

Roberts’ used her show as an opportunity to thank those who have supported her during her career. Singing Sandra, who she referred to as her mother in the business, was presented with a plaque and flowers, Kernal Roberts, who was responsible for putting together the show, was also presented with an award while Machel Montano, who Roberts’ sang with for years, was presented with a painting by Nikkeisha Stewart depicting Roberts and Montano.

Paying tribute to Roberts’ with whom he won a Road March title in 2006 for Band of the Year, Montano said: “You could be like somebody but you could also be yourself. And you could take certain things from somebody and still be yourself. It’s called the essence of being and my essence of my being that I see in Patrice is hard work, dedication. Machel and Patrice have the most songs this season and that is a testament to a hard working person. The little girl from Toco is a big girl now,” he said.

Strength of a Woman also played up the power of women in soca with performances from Nessa Preppy, Destra Garcia, Nailah Blackman, Nadia Batson and surprise guest Angela Hunte who flew in for the show.  Many of the performers introduced the following acts which ensured the show flowed without interruptions from the hosts Whitney Husbands and Giselle the Wassi One.

Behind every good woman is a good man, the hosts said and the men on the cast proved to be just that like Problem Child who has been writing Roberts’ hit songs for years and Farmer Nappy who said he was hard on Roberts' when she joined the band with himself and Montano.

The Lounge: Patrice Roberts plans to make her show a Carnival staple

Sweet: Peeps production stops, but Easter is taken care of