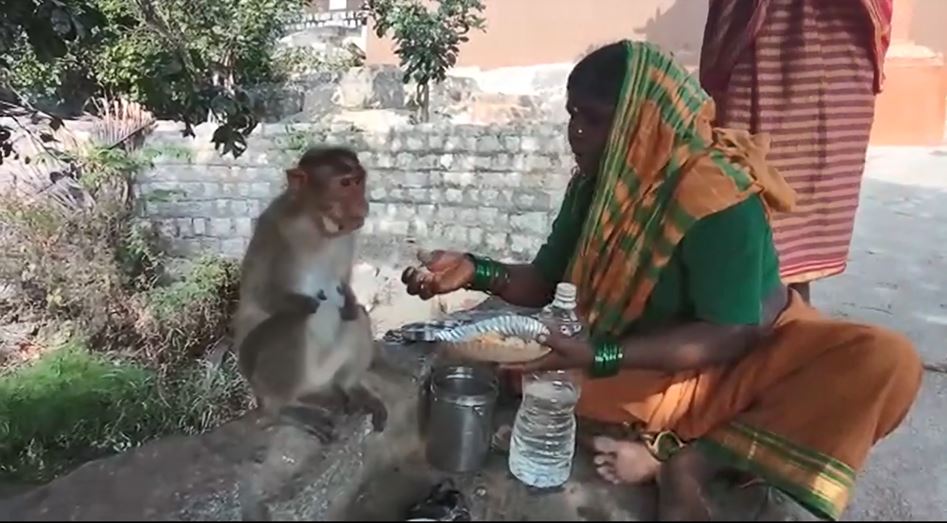 Two women who beg for a living have adopted a monkey that lost both its hands in an accident.

They use their meagre earnings to support the animal - cooking hot food and feeding it with their own hands.

The monkey, which is not able to hold anything, is helpless and totally dependent on them.

Ningavva, 49, and Kashibhai, 57, seek alms at a temple near Koppal in South India, where the monkey lives. They carry packed food to it at least twice a day and feed it.

They take out morsels of food, roll them into small balls, and put them into monkey's mouth.

The women earn less than a pound each every day but they don't mind setting aside a part of it to help the monkey.

The monkey was badly injured a year ago when it got electrocuted after touching a live wire. It was rushed to a nearby veterinary hospital, where its hands were amputated.

Ningavva and Kashibhai adopted the monkey, seeing its helpless condition and have been taking care of it since then.

A local resident Narayan Badiger said the monkey was depressed after the accident. "It is coming out of its trauma thanks to the two women, who have been taking care of it."

"It still gets jumpy if anyone approaches it or hears any sound suddenly," he added.

A few others in the area also try to help the monkey, but it accepts food only from the two women it is comfortable with. Ningavva and Kashibhai always speak to the monkey in soothing words when they feed it.

The two women said they treat the monkey like their daughter. They added that it is a fussy eater and likes 'uppit, a local snack made of fried semolina and spices.

WATCH: US tourists fight over umbrella on Saint Kitts beach