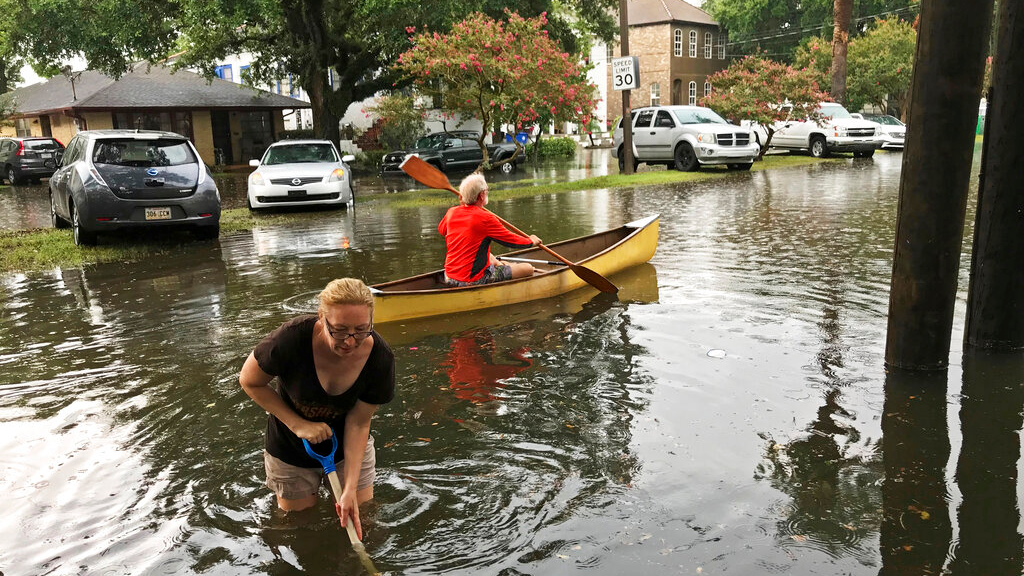 People cope with the aftermath of severe weather in the Broadmoor neighborhood in New Orleans, Wednesday, July 10, 2019. (Nick Reimann/The Advocate via AP)

Tropical Storm Barry's wind and rain began hitting parts of Louisiana Friday as New Orleans and coastal communities braced for a drenching from what could be the season's first hurricane.

A hurricane warning was in effect along the Louisiana coast, with forecasters predicting landfall as a hurricane by early Saturday.

The storm's rains are expected to pose a severe test of New Orleans' improved post-Katrina flood defenses . Barry is forecast to bring more than a foot and a half (0.5 meters) of rain to parts of the state as it moves slowly inland.

"There are three ways that Louisiana can flood: storm surge, high rivers and rain," Louisiana Gov. John Bel Edwards said. "We're going to have all three."

Edwards warned of a dangerous combination with the already-high Mississippi River, which has been swelled by heavy rain and snowmelt upriver this spring. He said authorities do not expect the river to spill over its levees, but cautioned that a change in the storm's direction or intensity could alter that.

National Hurricane Center Director Ken Graham said pockets of Louisiana could have as much as 25 inches (63 centimeters) of rain.

"So here's the takeaway: Dangerous situation," he said during an online presentation Thursday. "That kind of rainfall in this system could cause flash flooding, cause ponding of water."

National Guard troops and rescue crews were stationed around the state with boats and high-water vehicles. Helicopters were also on standby, and supplies including drinking water and blankets were ready for distribution, the Guard said.

Barry could have winds of about 75 mph (120 kph), just barely over the 74 mph threshold for a hurricane , when it comes ashore, making it a Category 1 storm. Forecasters said Friday morning that while their models don't "explicitly show Barry becoming a hurricane, it is still possible for that to occur before landfall."

As of early Friday, Barry was about 80 miles (130 kilometers) south of the mouth of the Mississippi, with winds around 50 mph (80 kph). Tracking forecasts showed the brunt of the storm blowing into the Louisiana delta west of New Orleans on a path that could continue toward Chicago, swelling the Mississippi River basin with water that must eventually flow south again.

Among the last to leave the town of Phoenix was 65-year-old Clarence Brocks and his family. The Plaquemines Parish native has evacuated many times and had to rebuild after Katrina wiped out his home. But he said that he wouldn't want to live anywhere else, despite the yearly threat of hurricanes.

"I was born and raised here. This is all I know," the Air Force veteran said. "I've been all over the world and guess where I want to be at? Right here."

Jesse Schaffer III of Meraux (MEE-roh) in St. Bernard Parish to the north was helping his relatives in Plaquemines Parish get to family members' houses in safer areas. He said around 20 relatives were staying with him and his wife because their house is safer.

"We're trying to evacuate and get all of our family members up and go to St. Bernard Parish," he said.

With lightning flashing in the distance and some streets already covered with water from heavy rains, shoppers at an Albertsons grocery store in Baton Rouge stripped shelves bare of bread by Thursday night. Half the shelves normally filled with bottled water were empty.

A radar loop of Barry filled a TV screen at a brewery near downtown. Nearby, the sign outside a convenience store read: "Barry needs a beer and a nap."

Meanwhile, utility crews with bucket trucks that could be needed after the storm filled hotel parking lots along Interstate 59 in southern Mississippi.

New Orleans Mayor LaToya Cantrell said Thursday that the pumping system that drains the city's streets is working as designed but that Barry could dump water faster than the pumps can move it.

"We cannot pump our way out of the water levels ... that are expected to hit the city of New Orleans," she warned.

However, the city did not plan to order evacuations because Barry was so close and because it was not expected to grow into a major hurricane. Officials instead advised people to keep at least three days of supplies on hand and to keep their neighborhood storm drains clear so water can move quickly.

Hurricane Katrina caused catastrophic flooding in New Orleans in 2005 and was blamed altogether for more than 1,800 deaths in Louisiana and other states, by some estimates.

In its aftermath, the Army Corps of Engineers began a multibillion-dollar hurricane-protection system that isn't complete. The work included repairs and improvements to some 350 miles (560 kilometers) of levees and more than 70 pump stations that are used to remove floodwaters.

Watch: 6 dead in storms and floods in southeastern China