Watch: UN calls for aid for victims of Mozambique cyclone 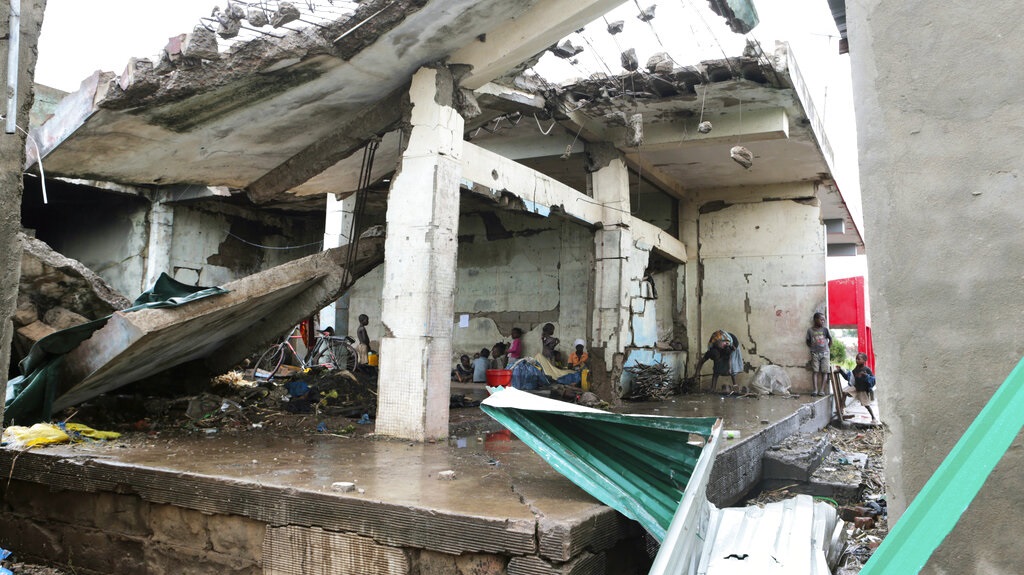 The United Nations is making an emergency appeal for $282 million for the next three months to help Mozambique start recovering from the devastation of Cyclone Idai.

The U.N. funding will be used to provide water, sanitation, education and restoring the livelihoods of the hundreds of thousands of displaced people, U.N. humanitarian chief Mark Lowcock said Monday.

He said separate appeals will be made shortly for Zimbabwe and Malawi, also hard-hit by the cyclone.

Lowcock said funds for cyclone victims are starting to come through, including 22 million pounds from the United Kingdom, but are far outstripped by the needs.

UNICEF head Henrietta Fore just visited Mozambique's ravaged port city of Beira and said "it's a race against time" to help the displaced and prevent disease.

Authorities in Mozambique say that with a key road open to the badly damaged city of Beira, conditions on the ground improving and more international help arriving, vital aid to those hit by Cyclone Idai should now flow more freely.

Cyclone Idai's death toll has risen above 750 in the three southern African countries hit 10 days ago by the storm, as workers rush to restore electricity, water and try to prevent outbreak of cholera.

In Mozambique the number of dead has risen to 446 while there are 259 dead in Zimbabwe and at least 56 dead in Malawi for a three-nation total of 761.

The death toll is "very preliminary," said Mozambique's environment minister, Celso Correia, who said it is expected to rise.

The U.S. military will join the number of international aid groups assisting in providing food and medical care to those affected by the massive cyclone, one of the worst natural disasters in southern Africa in recent history.

Some 228,000 displaced people are now in camps across the vast flooded area of Mozambique, said Correia, who is the government's disaster coordinator, briefing journalists on Monday. It is still too early to give a number of missing, he said.

Diarrhoea is reported in camps but he says it is too early to say whether it is cholera. He has said that it is almost certain that the deadly disease will emerge.

Aid teams are going to high points on islands created by Cyclone Idai and finding "a lot of people," Correia said.

Until all areas can be reached and assessed, it is impossible to say the disaster response effort has turned a corner, he said.

When asked by journalists about people found sheltering in a school along the newly opened main road to Beira who said they had not eaten since the storm, Correia said the aid had to be prioritized according to necessity.

At least they were found and aid is coming, he said. "They can still hang on for a few days."

Correia defended Mozambique's storm warning system, asserting that people knew weeks in advance that trouble was coming. More than 300,000 people were warned in advance, he said. "All reports say the system worked," he said.

Some residents of Beira and Buzi, however, have said they had heard nothing to indicate the scale of the cyclone and were shocked by the quickly rising waters, and some have expressed anger at the government for not giving more warning.

Mozambique's former president, Joachim Chissano, was at the press briefing and said authorities "did what they could" to warn residents. Chissano added that it would take three years to rebuild the city of Beira.

Sebastian Rhodes Stampa, deputy director of the U.N. Humanitarian operation, told reporters that "a lot more assistance" should be seen by Tuesday as more aid arrives at staging areas such as the Beira airport.

He confirmed the reports of diarrhoea in camps. "It's a killer," he said.

He said the government is repairing key roads just enough to allow aid and other trucks to have access, with repair crews on hand when problems arise. They are being repaired "for now, and that's good enough," Stampa said.

One bright spot amid the hurried response efforts is the weather, which on Monday morning in Beira was dry, partly cloudy and hot. With no rains, the flooded areas should be able to drain.

"I'm pretty confident in the weather," Stampa said. "It's the only thing I'm confident about."

The United States military says President Donald Trump has directed it to support relief efforts to help Mozambique with the destruction caused by Cyclone Idai more than a week ago.

The U.S. Africa Command statement comes three days after Mozambique's government made a formal request to the international community for aid. The southern Africa nation earlier declared a national disaster as its president said deaths from the cyclone could reach 1,000. Confirmed deaths are now close to 450.

The U.S. statement says AFRICOM provides disaster relief "when it has unique capabilities that can be utilized in the U.S. Government's response."

It says the Combined Joint Task Force - Horn of Africa will lead the U.S. military efforts and that its initial assessments have begun at the scene of the disaster.

Cyclone Idai deaths could exceed 1,000 as need for aid grows