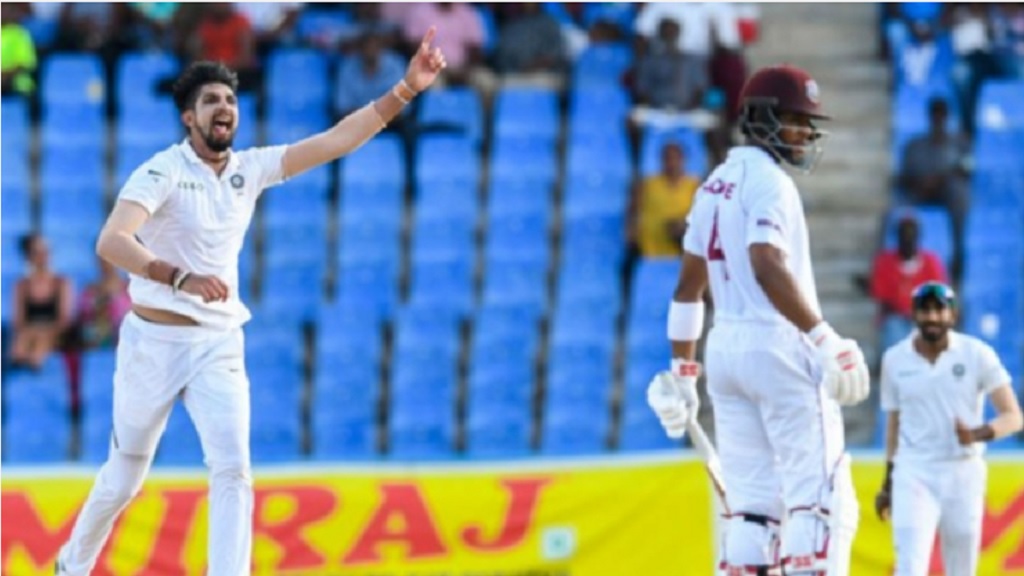 Ravindra Jadeja (58) and Ishant (19) held up the Windies with valuable runs down the order at the Sir Vivian Richards Stadium on Friday, getting the tourists up from 207-7 to 297 all out.

Kemar Roach (4-66) and Shannon Gabriel (3-71) had the top-ranked side in trouble before the tail wagged and India then exposed West Indies' batting deficiencies to take the upper hand in Antigua.

Ishant took 5-42 as Jason Holder's side collapsed to 189-8 at stumps - trailing by 108 runs - after losing five wickets in the final session, Roston Chase top-scoring with 48.

Rishabh Pant fell in the third over of the day after India resumed on 203-6, edging the excellent Roach to Holder at second slip, but Jadeja and Ishant frustrated the Windies with an eighth-wicket stand of 60.

Ishant's stubborn resistance was ended when he was bowled by a slower yorker from paceman Gabriel for 19, but Jadeja brought up his 11th Test half-century by cutting Chase for four.

Mohammed Shami was caught and bowled by Chase (2-58) without scoring and Jadeja hit the spinner for a first six of the match over midwicket before edging Holder behind to bring the innings to an end.

The Windies also lost Shamarh Brooks for 11 before tea, Jadeja fortunate to get rid of the debutant after the ball clattered against Pant's thigh and looped up to Ajinkya Rahane.

West Indies were in trouble on 88-4 when Darren Bravo followed leg before to Jasprit Bumrah early in the evening session, but Chase and Shai Hope hung around for a while and got the scoreboard ticking.

Ishant then came to the fore, KL Rahul taking a fine catch at square leg to remove Chase (48) and Hope (24) edging through to Pant before the quick ended a promising knock from Shimron Hetmyer (35) and dismissed Roach in the same over.

Holder and Miguel Cummins were still there at the close, but it is very much advantage India heading into day three.