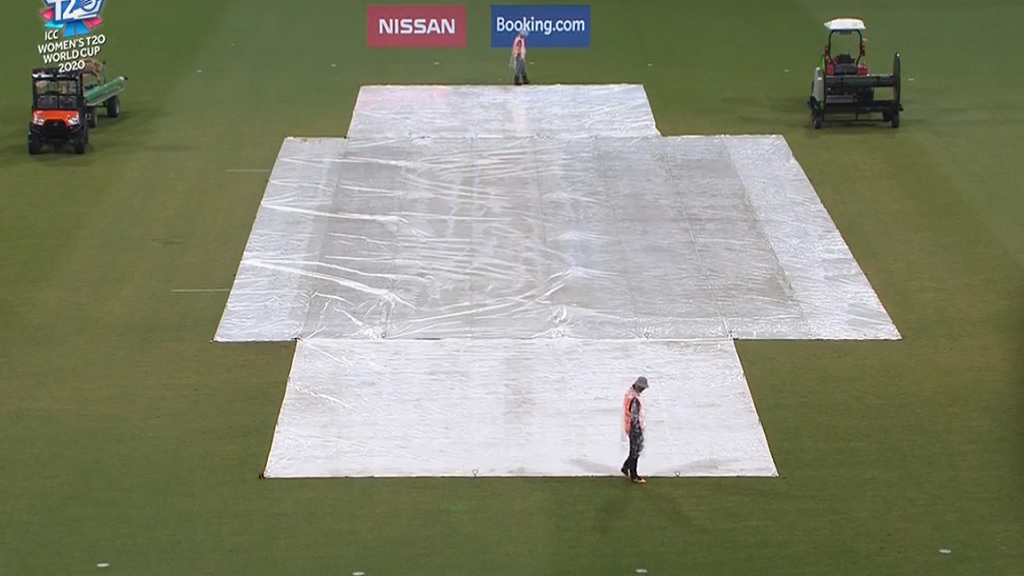 Rain covers on the pitch after play between West Indies and South Africa was washed out at the Women's T20 World Cup on Tuesday at the Sydney Showground Stadium.

West Indies finished third in Group B of the ICC Women’s T20 World Cup in Australia when their fourth and final match against South Africa was washed out on Tuesday.

The match was scheduled to be played at the Sydney Showground Stadium but the rain started from the first match of the afternoon between Thailand and Pakistan.

The Proteas’ place at the top of Group B was confirmed as they took a point with no play possible. The wash-out was a disappointing end to West Indies campaign that saw them come away with a win against Thailand and defeats to England and Pakistan.

Anisa Mohammed, the vice-captain and experienced off-spinner, who would have stood in for injured Stafanie Taylor had the game gone ahead, felt the abandoned game was an opportunity missed.

“There are some positives from the tournament – we fielded well and looked good as a bowling unit, going back we're going to have to work on our batting. Players have to pick themselves up and as much as management can give advice, it’s up to the players to perform on the day.” – Anisa Mohammed.

The team will return home later this week. Most of the players are expected to participate in the Cricket West Indies Colonial Medical Insurance Super50 event in Guyana.

The next international matches will be against South Africa in May and June in Jamaica and Trinidad. After that, they will travel to Sri Lanka for the ICC World Cup Qualifiers from July 3-19.

India will face 2009 champion England and South Africa will take on four-time champion Australia in the semifinals.

The four semifinal teams were already determined on Monday when Australia edged New Zealand by four runs in Melbourne to place second behind India in Group A. All that hinged on the last day of group games was the order in which South Africa and England would finish and the composition of the semis.

The semi-final will take place at the Sydney Cricket Ground on Thursday.

The winners of the semifinals will advance to the final at the Melbourne Cricket Ground on Sunday, which is International Women's Day.