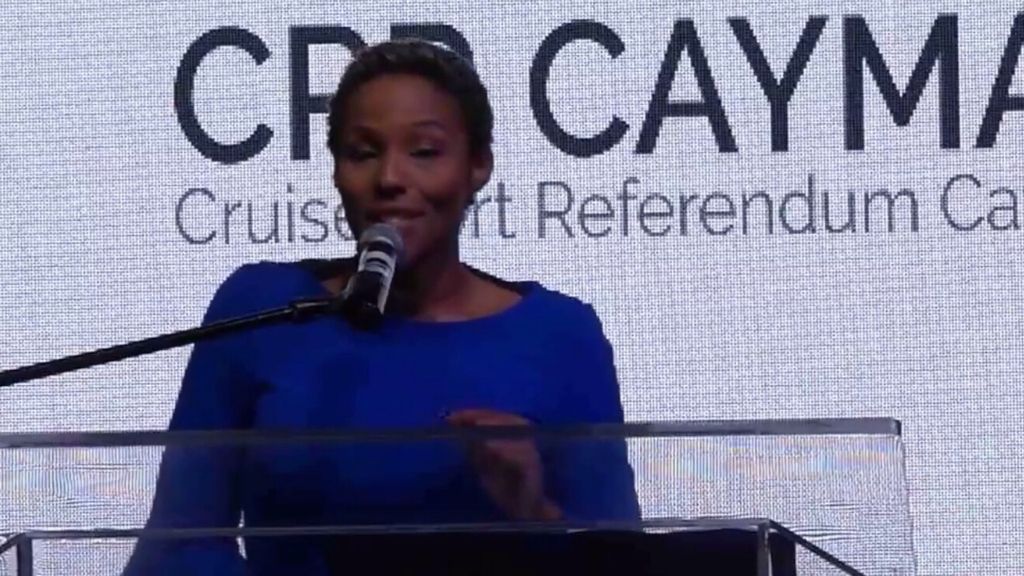 For those who weren't in attendance at the CPR Cayman Launch at Celebration Park in George Town - the only thing just as empowering as the idea of staying true to the principles of democracy was Ruthanna Young's speech.

Standing before a mixed crowd on November 21 just after 7 pm, and clad in the cobalt blue of her country's flag, Young set out not to promote a side or sway the audience in any particular direction, but to share her own love of country, and to urge others to vote.

Young told the uplifting and poetic story of what it means to be a Caymanian through her eyes.

Said Young, of her speech: "It's so funny what happens when you speak your truth. What I was doing was holding true to who I am and the things that I believe, and I guess that was what connected with people. It was humbling and an honour to be able to represent Caymanians in that way."

This iconic speech could very well be immortalised in the history books of Cayman.

Speech given by Ruthanna Young

November 21 2019, at the Celebration Park in George Town.

In 1930, Mrs Leila Ross Shier penned these words to paper:

“O land of soft, fresh breezes,
Of verdant trees so fair
With the Creator's glory reflected ev'rywhere. O sea of palest em'rald,
Merging to darkest blue,
When 'ere my thoughts fly Godward,
I always think of you.”

Sixty-three years later in 1993, these words form part of what was officially declared as our national song, Beloved Isle Cayman. These words speak to these unique and beautiful islands that we are blessed to call home.

The words of Beloved Isle Cayman for me are the beginning of a conversation I wish to start with you tonight. They asked me to speak on the importance of participating in our first ever People’s Initiated Referendum.

I believe we, as citizens - we as Caymanians have 3 key responsibilities around this discussion.

1. Get Registered to Vote at the earliest possible opportunity.
2. VOTE whenever that opportunity arises
3. Keep your voter registration information current

I was not asked here tonight to speak to you about why to “Yes” but simply on, “Why Vote”. The answer to that question for me starts with the mere fact that I - that we - are CAYMANIANS and this referendum asks us to participate in a decision being made about Cayman - our home.

As I have told MANY people, these Islands are the ONE PLACE that NOBODY can run me from. This is the ONE PLACE that NOBODY can deny me access or entry to. So I... We… Caymanians... would only be wise to participate at EVERY OPPORTUNITY WE CAN in the decision making of our country. So when you ask me, why Vote??? Why participate? Why make your voice heard? My response is simple - because I am Caymanian and this is my home.

And if WE don’t participate, if we don’t vote, we are saying that we will accept whatever decisions whom ever else makes on our behalf.

And look at where that has gotten us!

Silence and Cowardice has landed many of us as second AND third class citizens in our own country.

We must reconnect to the deepest part of who we are as a people in order to remember that NOBODY can be expected to safeguard this treasure but us.

So in writing my thoughts for tonight I had to pause and reconnect myself to what I believe is the core of who I am as a Caymanian.... Not just a West Baya from Crab Hole Road... but a Caymanian.

I Am Stew Conch, Stew Turtle, and Cayman Style Beef.

I Am Caymanite and Black Coral.

I am dories and catboats.

I am grass piece, marl roads and Nor-Westers.

I am Swanky and sweet sweet Kitchen Band Music. I am chickens running wild in the middle of our central financial district.

I am Blue Iguanas, Agoutis and Cayman Parrots.

I am wattle, daub and thatch roofs.

I am Eden Rock, Devil’s Grotto and Bloody Bay.

●Rankin (with and without the ‘E’) ●Bush

I Am the proud Grand-daughter of a Legend, a Caymanian Legend... the late... the Great Captain Marvin Ebanks.

I Am Cayman Kind

I Am one of the guardians at the gatehouse responsible for directing, protecting and preserving, through participation, the future prosperity of these islands... my home... our home... the Cayman Islands.