There are 29 endemic plant species that are found solely in the Cayman Islands.

Trees are a part of our history, culture and natural heritage.  They have a plethora of uses and of course, from an environmental perspective, they help to sequester Carbon out of the atmosphere.

Local forests are home to popular trees such as the Silver Thatch, Ironwood, Fustic, and others. Some of our beautiful trees are native to other countries and are a symbol of the beautiful melting pot that is Cayman.

Here are some of the most striking trees on our islands:

In front of the visitor’s centre at The Queen Elizabeth II Botanic Park, is a rainbow gum, a large evergreen tree noted for its incredibly colourful bark. This Eucalyptus species is found naturally in the Philippines and from other countries in the region.

Smooth, its bark peels to reveal streaks of blue, purple and maroon. The foliage of the leaves is aromatic when crushed. It is used for pulp production, as an ornamental tree because of its attractive bark and is an excellent shade tree.

Located in Camana Bay, in the Cinema parking lot, is the sausage tree with rope-like stalks that resemble spaghetti and can range from three to 24 inches long. A tropical tree, native to Africa, it grows 6 to 12 metres (20 to 40 feet) tall and bears sausagelike fruits (the trees at Camana bay do not bear fruit), which hang down on the cordlike stalks. The flowers are burgundy and only bloom at night.

Found in dense forests such as the Ironwood Forest, the Forest at Crystal Caves, and the Mastic Reserve, this tree is endemic to the Cayman Islands and is endangered. It is of major cultural significance to Cayman because it was used to build the framework for early Caymanian homes. The wood of the tree is hard, heavy, water resistant and termite proof. As a result, many ironwood structures have lasted for more than a century.

The national tree of the Cayman Islands can be found all over the island, and especially in East End. The silver thatch, which is now endangered, was used for making rope, which continues to be a traditional activity. Silver thatch ropes are useful because they are resistant to salt water and were once an income earner for Cayman. The Silver Thatch was also used historically in construction, for making roofs and thatched walls. Silver Thatch Palm leaves were also used for hats, brooms, baskets and fans, which continue to be sold in tourist and craft shops.

You may or may not be in approval of our including this tree on the list, but as hundreds of listicles would attest, this tree, located on South Sound road, is one of the most striking sights in Grand Cayman. The “flip-flop” tree has become the subject of numerous tourist selfies and has its own Facebook page.

The shoe tree is the brainchild of Wolfgang Brocklebank and his girlfriend Giovanna Inselmini, who started nailing the flip flops that they found polluting Cayman’s beaches to the dead tree, to draw attention to the pollution problem. The collection now reaches more than 15 feet up the trunk. 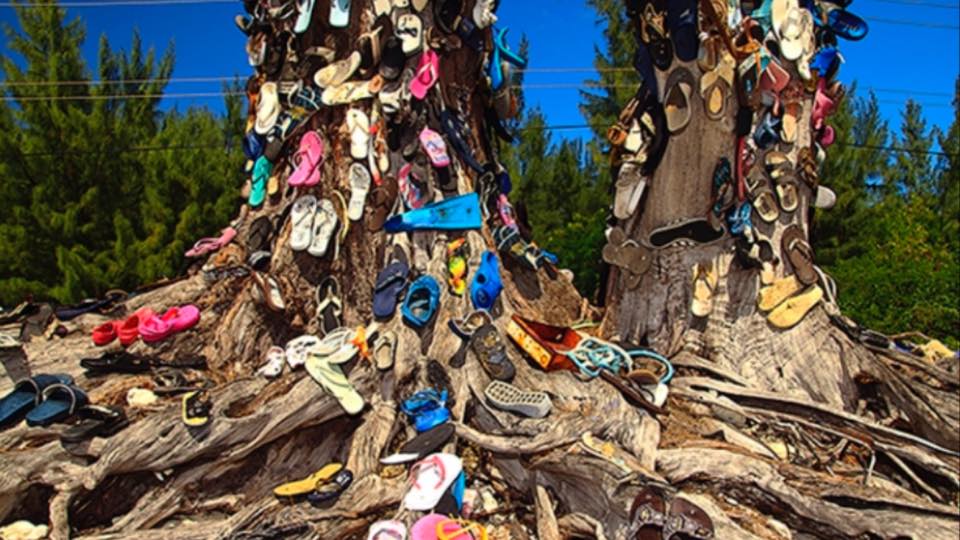