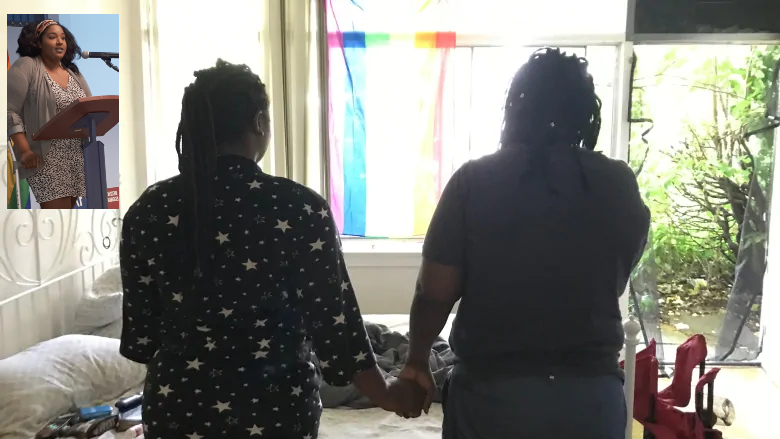 Jane, right, and Patricia are pictured in late July in their Toronto apartment, which was made possible by a Rainbow Railroad volunteer and donor. (Acey Rowe/CBC) Activist Roann Mohammed (inset/LOOP)

Roann Mohammed, Director of SHE Barbados and Co-Director of Pride Barbados has responded to the Rainbow Road article in which a Barbadian lesbian couple has detailed their harrowing tale of survival and their quest to get asylum in Canada.

In the online news story, it was reported that the couple, under the pseudonyms Jane and Patricia, spoke on the Canadian Broadcasting Corporation (CBC) radio show - The Doc Project about their experience living as lesbians on the island, including details of how they had their home firebombed. The couple also spoke on how they endured difficulties in Barbados, including sexual harassment by men at work, homophobic slurs and getting jumped.

In the piece Barbados was described as "a Caribbean country where hate crimes against LGBTQ people are common and being gay can be punishable by life imprisonment."

The couple received assistance from the organization Rainbow Road, a Toronto-based organization that relocates LGBTQ refugees from nations where they are at risk.

The couple described the relocation to Canada by saying; "it was the best thing for our safety and well-being."

Some Barbadians have been taken aback by the harrowing details laid out in the couple's account, while others have been skeptical of some of the details shared in the account posted two days ago to the CBC platform.

Mohammed spoke to Loop News today, December 19, 2019, saying how it is valid for people who are facing harsh marginalization and lack of access to basic resources to go to a place where they can live a life with dignity. She explained that she sees no issue with any person pursuing a better life away from persecution.

"Everybody deserves to want to be in a space where they can live their lives safely and not worry about the threat of violence all the time."

However, she went on to explain that part of the issue with the narratives from areas such as Canada and the United States is that they ignore the nuance of the lived experiences of many LGBT people in other nations and paint themselves as saviours.

"There are [LGBTQ] people who live full and happy lives in Barbados and don't experience any of this persecution. But it is also a case of privilege, and those that are afforded the most privileges are the ones that are most secure."

Hence she also pointed to the ways in which the article was spreading inaccuracies around the laws affecting LGBT people on the island.

"The way in which the article spoke about the law is problematic because it lacks nuance. It's not illegal to be gay in Barbados. It is not illegal to be gay in any Caribbean territory. What is illegal is a particular sex act and that was criminalized in1868 by British colonizers, and while the particular sex act is criminalized across the board, it is something that is used to legitimize discrimination and marginalization against LGBT people."

The couple recently got engaged and still live in Canada. They said they are no longer afraid to hold hands. "I'm free over here, and I'm happy. That's all that counts," Jane said. "We made it."

Kim Burrell under fire for comments about gays and lesbians