Amid pandemic, the world's working poor hustle to survive 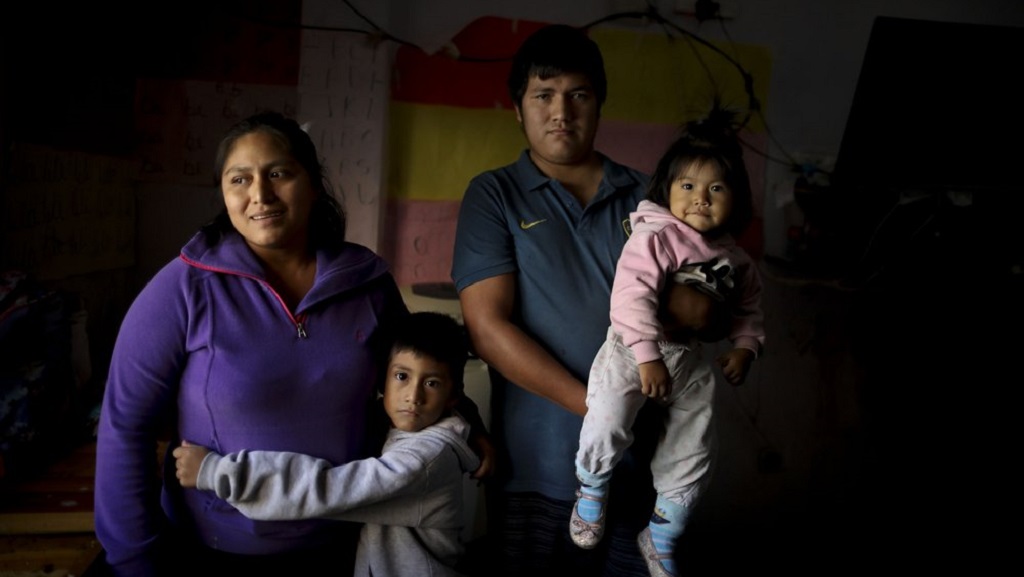 In this April 7, 2020, photo, Rosemary Paez Carabajal, left, her husband Yonoma Saenz, their children Laisa and Leonardo pose for a photo at the room they rent in Buenos Aires, Argentina. Carabajal makes a living selling coffee on the street, and can no longer do her job after the government-ordered lockdown to curb the spread of the new coronavirus. (AP Photo/Natacha Pisarenko)

From India to Argentina, untold millions who were already struggling to get by on the economic margins have had their lives made even harder by pandemic lockdowns, layoffs and the loss of a chance to earn from a hard day's work.

The toll for families is hunger and poverty that are either newfound or even more grinding than before. Hunkering down at home to ride out the crisis isn't an option for many, because securing the next meal means hustling to find a way to sell, clean, drive or otherwise work, despite the risk.

Here are six stories from six corners of the world of people whose lives were upended by the same invisible menace.

Judith Andeka has seen tough times before, but nothing like this.

The 33-year-old widow and mother of five used to earn $2.50 to $4 a day washing clothes in Nairobi's Kibera, one of the world's biggest slums. 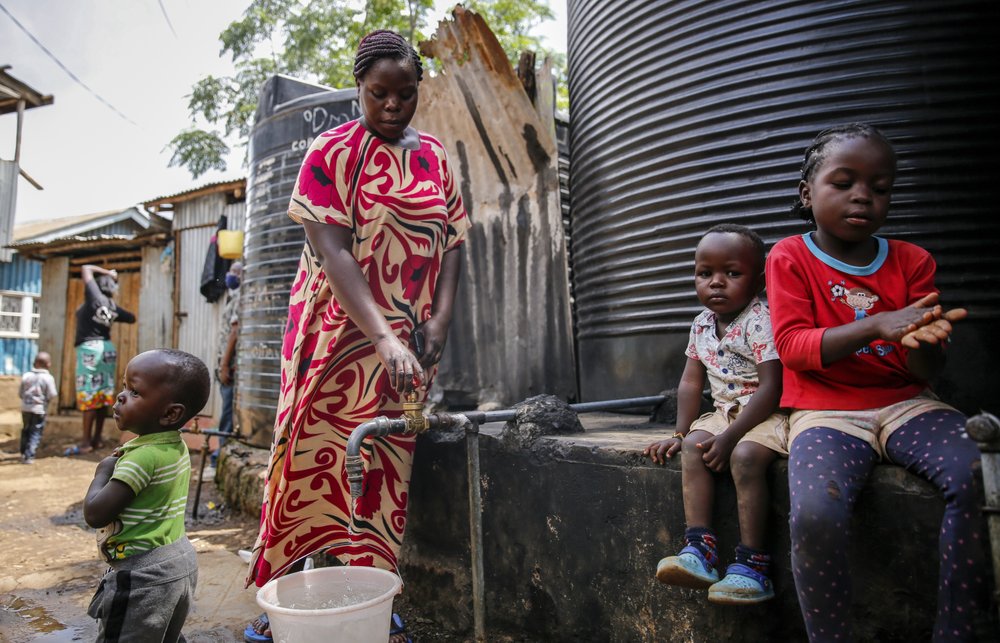 (Photo: In this April 10, 2020, photo, Judith Andeka a widow and mother of five, fetches water with a bucket in the Kibera slum, or informal settlement, of Nairobi, Kenya. Andeka used to earn $2.50 to $4 a day washing clothes in Nairobi’s Kibera, one of the world’s biggest slums. With people not going to work because of restrictions on movement, neighbors can’t afford her services. (AP Photo/Brian Inganga)

With people not going to work because of restrictions on movement, neighbours can't afford her services.

She's been forced to send her kids to live with relatives who are slightly better off: "I had no choice, because how do you tell a 2-year-old you have no food to give them?"

Each time she goes out looking for food or a chance to earn, she risks being robbed of the few belongings she owns in her shack. Her most prized possessions are a small gas burner and an old black-and-white TV.

Rosemary Páez Carabajal usually pushes a coffee cart on the streets of Argentina's capital, but the lockdown forced her to stop. Páez Carabajal, her blacksmith husband who's also out of work and their two children rent a single room in a two-story brick building for the equivalent of $119 a month.

Now the cart sits idle in the hall, and the home is stacked with textbooks as the couple try to home-school their lone school-age child, a 7-year-old son.

The coronavirus came at a time of already painful recession in Argentina, with more than a third of its 44 million residents in poverty, according to figures from late 2019.

"When the quarantine was coming," Páez Carabajal recalled, "I said: 'We're all screwed, us day-to-day vendors.'"

When Budi Santosa lost his job as a cook in a Chinese fast food restaurant, the father of two toddlers became one of nearly 2 million who've been put out of work in Indonesia as a result of the pandemic. 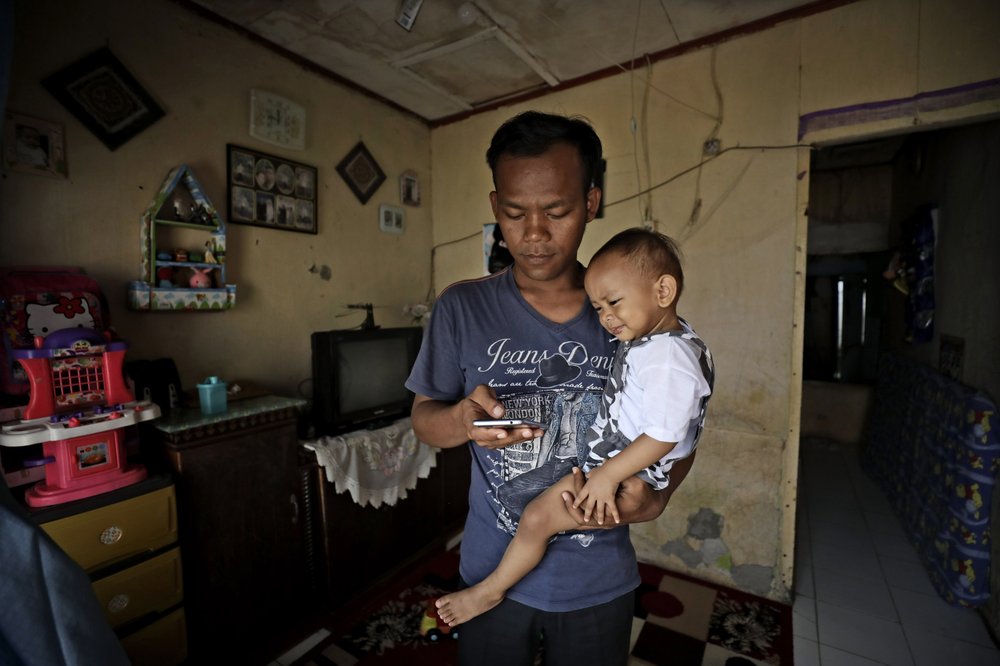 (Photo: In this Monday, April 20, 2020, photo, Budi Santosa, who was a cook at a Chinese restaurant before losing his job amid the coronavirus outbreak, checks his phone as he carries his young son in his rented house in Jakarta, Indonesia. “I am the breadwinner of the family. My children are toddlers. So they are the first things I thought about that day,” he said. (AP Photo/Dita Alangkara)

Restrictions to contain the virus also impacted the 32-year-old's side job where he earned extra cash moonlighting as a driver.

Santos hasn't had much time to dwell on his misfortune because he has to think about essentials: food, rent and paying down the debt on his motorcycle. He now averages a little over $4 a day making deliveries.

"The government told us to stay at home," he said, "but if I stay home my wife and children will have no food to eat."

When the government shuttered traditional coffee shops, or "ahwas" as they're famously called in the Middle East, it cost Hany Hassan his job. He had been earning just $5 a day, but at least it was enough to feed his family.

"It's a very difficult situation ... We are financially ruined," the 40-year-old father of four said.

With no chance of finding another job in Cairo, he returned to his family and hometown in the province of Minya, south of Cairo. But chances of finding work are slim in the villages, too.

He goes out daily looking for a job, but he's come up empty-handed. He's borrowed money to keep his family afloat.

Jordan's wide-reaching lockdown has hit hard in al-Wehdat, a crowded, impoverished refugee camp in the capital. Brothers Mohammed and Khalil Yousef used to scratch out a day-to-day existence as truck drivers hauling construction supplies and produce. Each earned between 10 and 20 dinars, or $14 to $28, a day.

Between them they have nine children, all under 16. In Khalil's cement shack, the refrigerator is bare save for some tomatoes, onions and a few bags of pita bread.

After being idled for weeks, they are now only partially getting back to work as some restrictions on drivers are eased.

Mohammed said residents usually help each other out in hard times, but borrowing from neighbours isn't an option today. "The whole camp is without work now," he said. "Everyone is broke."

Mahesh and Gita Verma ran a flower stall outside a Hindu temple honoring the monkey god Hanuman in this northern Indian city. When authorities ordered a lockdown, they found themselves indefinitely sidelined just like others in the informal sector, which makes up 85% of India's labor force.

The Vermas and their five children, ages 8 through 20, were already living hand to mouth before the coronavirus. Now they've restricted themselves to mainly potato-based dishes.

Mahesh borrowed money from friends to convert the flower stall into a milk and bread stand, a business exempt from the lockdown restrictions.

Still, "we cannot have food like we used to have," Gita said.