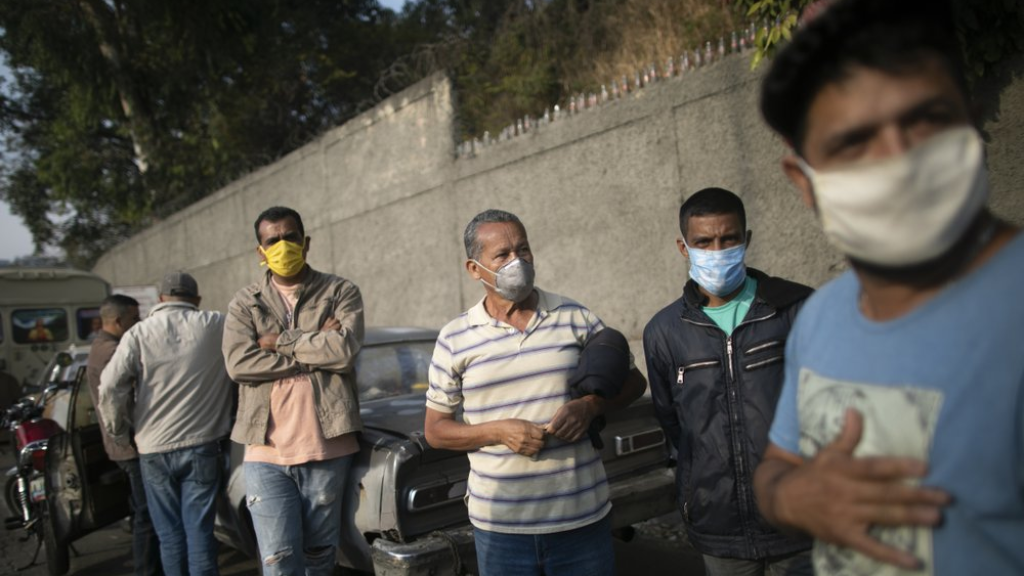 Men stand close to their cars as they wait for hours to fill their cars up with gasoline in Caracas, Venezuela, Thursday, April 02, 2020. Lines at gas stations around the country's capital are getting longer and longer with some saying it was only this bad during the oil worker's strike of 2002. (AP Photo/Ariana Cubillos)

With gas lines across Venezuela growing, a controversial shipping magnate has stepped in to prevent the country from running out of fuel amid the coronavirus pandemic, The Associated Press has learned.

The fuel shortage, in the nation that sits atop the world largest crude reserves, is the latest threat to Nicolas Maduro's rule at a time he is under intense US pressure to resign.

Wilmer Ruperti's Maroil Trading Inc. billed state-owned oil monopoly PDVSA 12 million euros last month for the purchase of up to 250,000 barrels of 95-octane gasoline, according to a copy of the invoice obtained by AP.

The gasoline was purchased from an undisclosed Middle Eastern country, said two people familiar with the transaction. They agreed to discuss the sensitive dealings only on condition of anonymity.

The single gas shipment isn't going to resolve Venezuela's supply problems. But with the economy paralyzed, any amount of fuel is welcome relief, analysts said.

Ruperti, a former oil tanker captain, has a history of coming to the rescue of Venezuela's socialist government at critical junctures, something that endeared him to the late President Hugo Chávez.

But his latest gambit, which could help stave off a deepening humanitarian crisis, is bound to irritate the Trump administration, which this week doubled down on its campaign of support for opposition leader Juan Guaidó by sending Navy ships to the Caribbean on a counternarcotics mission following Maduro's indictment in the US, on narcoterrorist charges.

Venezuela's oil fields and refineries have crumbled from years of mismanagement. More recently, fuel imports have dried up as the Trump administration tightened sanctions, targeting two trading houses owned by Russia's Rosneft for providing a lifeline to Maduro.

Then came the coronavirus, which sent crude prices crashing and paralyzed what little was left of domestic production.

"In Venezuela, the only thing spreading faster than the coronavirus are the gasoline shortages," said Russ Dallen, head of Caracas Capital Markets.

In recent days, gas lines have popped up across Caracas, which is typically immune from days' long waits common in the rest of the country. Most stations had closed as supplies ran out.

At one of the few gas stations still open in the capital Thursday, hundreds of cars, taxis and trucks hugged the shoulder of a highway as heavily armed soldiers stared down motorists, some of whom had been waiting three days to fill up.

Among those in the 3-kilometre long line was Javier Serrano, who relies on a beat-up blue 1968 Ford Falcon to eke out a meagre living as a taxi driver.

"There's a curfew at night and no public transportation," he said. "One of my relatives could die at home because they don't have a vehicle."

The government blames the gas shortages on US aggression. On Friday, it said it was formulating a "special fuel supply plan" to restore stockpiles in the "shortest possible time," allowing the nation to combat the coronavirus.

"We deplore the position of extremist sectors of the Venezuelan opposition that collude with foreign governments to plan and execute these actions against the Venezuelan people," said Industry Minister Tareck El Aissami. "History will mercilessly judge these traitors."

Enter Ruperti to help again. In 2002, he chartered a fleet of Russian tankers to import gasoline amid a months' long strike at PDVSA seeking to remove Chavez.

More recently, he funded the defence of first lady Cilia Flores' two nephews in a politically charged US narcotics trial as well as that of American Joshua Holt, who was held for two years in a Caracas jail on what were seen as trumped-up weapons charges.

Ruperti was decorated by Chavez with military honours for breaking the strike and saw his business as a prized PDVSA contractor boom.

Later, however, he was sued by a unit of the Russian shipping company for allegedly paying millions in bribes.

While US sanctions have driven away from Venezuela many established shipping companies and commodity traders, Ruperti appears to be little fazed.

One of the documents obtained by AP shows his Swiss-based Maroil Trading AG opened accounts in dollars, euros and rubles at Moscow-based Derzhava Bank in November.

One person said the gas that Maroil billed to PDVSA should arrive to Venezuela in the coming days. Dallen estimates it's enough to supply current demand for about a week.

There have been only five deaths in Venezuela so far due to the coronavirus and most Venezuelans are closely observing a government-mandated lock-down, but concerns are rising that the already collapsed health care system will be overwhelmed if more people are infected.

Protests have started to emerge among farmers who complain that their produce is rotting because they can't transport it to urban centres.

"An acute gasoline shortage at this juncture would bring about a serious worsening of the country's humanitarian crisis, putting Venezuelans' lives at even greater risk," said Francisco Rodriguez, a Venezuelan economist who launched Oil For Venezuela, a US-based group lobbying for sanctions relief.