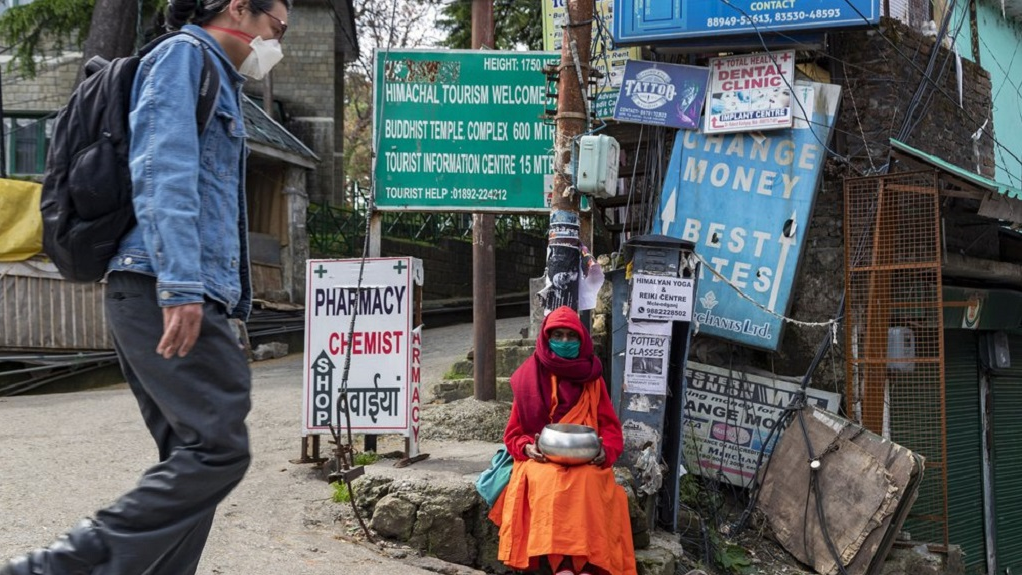 A Buddhist monk wears a mask to protect himself from coronavirus infection as he sits in a town square seeking alms in Dharmsala, India, Monday, April 20, 2020. India recorded its biggest single-day spike in coronavirus cases on Monday as the government eased one of the world's strictest lockdowns to allow some manufacturing and agricultural activity to resume. (AP Photo/Ashwini Bhatia)

India and Singapore announced their biggest single-day spikes in new coronavirus cases on Monday, as the crisis intensifies in parts of Asia.

India's spike came after the government eased one of the world's strictest lockdowns to allow some manufacturing and agricultural activity to resume.

At least 543 people have died in the country from COVID-19, the disease caused by the virus, and epidemiologists forecast the peak may not be reached before June.

The shelter-in-place orders imposed in India on March 24 halted all but essential services, sparking an exodus of migrant workers and people who survive on daily wages out of India's cities to villages in rural areas.

Authorities picked up travellers in a fleet of buses and quarantined many of them in empty schools and other public buildings for 14 days.

Starting Monday, limited industry and farming were allowed to resume where employers could meet social distancing and hygiene norms, and migrant workers were allowed to travel within states to factories, farms and other work sites.

Meanwhile, Singapore's confirmed cases shot up to nearly 8,000 after 1,426 infections were reported Monday, a single-day high for the tiny Southeast Asian city-state.

Singapore now has the highest number of cases in Southeast Asia at 7,984, a massive surge from just 200 on March 15. Authorities say most of the new cases were again linked to foreign workers.

More than 200,000 low-wage workers from Asia live in tightly packed dormitories that became virus hotspots after they were overlooked earlier by the government.

Officials have said that cases are expected to rise as testing continues at the dorms, but are hoping that a partial lockdown until May 4, mandatory wearing of masks and strict social distancing measures will help curb the spread of the virus.

— NO NEW CASES IN HONG KONG: Hong Kong reported no new cases on Monday for the first time in nearly seven weeks.

Prior to Monday, the city had seen eight consecutive days of single-digit infections, dwindling from a surge in cases in March as residents overseas flocked to return amid the US and Europe outbreaks.

Sri Lanka had been under a 24-hour curfew since March 20. It was lifted during daytime hours in more than two thirds of the country Monday and will continue in the remaining districts including the capital, Colombo, until Wednesday.

The curfew will remain in effect from 8 pm until 5 am until further notice. Sri Lanka had confirmed 271 cases and seven deaths as of Sunday.

For nearly four weeks, nonessential workers have been able to leave their homes only to buy groceries or to exercise.

Starting next week, construction and manufacturing can resume, and some schools will reopen, although home-learning will be encouraged.

The new figures brought the national totals to 10,674 cases and 236 deaths.

With its caseload slowing, South Korea has relaxed some of its social distancing guidelines, including lifting administrative orders that advised churches, gyms and bars to close.

— JAPANESE EXPORTS SINK: Japanese exports sank 11.7 percent in March as the pandemic slammed auto shipments to the US.

The Finance Ministry said exports to the US fell 16.5 percent, while those to China declined 8.7 percent.

Trade has slowed precipitously, and the International Monetary Fund forecasts that the world economy is heading into its worst slowdown since the Great Depression in the 1930s.

— JAPAN TULIPS RAZED: Tens of thousands of tulips in full bloom were razed at a Japanese park to prevent crowds from gathering.

The flowers were the centrepiece of a popular annual festival in Sakura city, east of Tokyo, that was cancelled this year.

People still gathered to admire the flowers, however, making social distancing difficult. "We, of course, wish for many people to see our flowers, but this situation is now about human life.”

“It was a heart-wrenching decision, but we had to do it," said Takahiro Kogo, a city official overseeing the park.

— BANGKOK EXTENDS ALCOHOL BAN: Thailand's capital, Bangkok, has extended a ban on the sale of alcoholic beverages to the end of April as efforts continue to contain the coronavirus.

A ban was originally imposed for April 10-20, when Thais would normally celebrate the Songkran New Year festival with drink-fueled merrymaking at large public gatherings.

Celebrations of the holiday were also postponed. Alcohol sales bans were separately ordered in all 76 of Thailand's provinces, which are likely to be extended.

A Bangkok official said people with alcohol dependency problems could be treated for free at the city's medical facilities.

"Neighbours" production company Fremantle Australia said it is one of the few TV dramas in the English-speaking world to resume production during the pandemic. "Neighbours" first screened in 1985.

It has been sold to more than 60 countries and has a larger following in Britain than Australia.

Its Melbourne studio will be separated into three scene areas with no crews allowed to cross between the areas, Fremantle said.

The Latest: More than 1 million European cases of virus