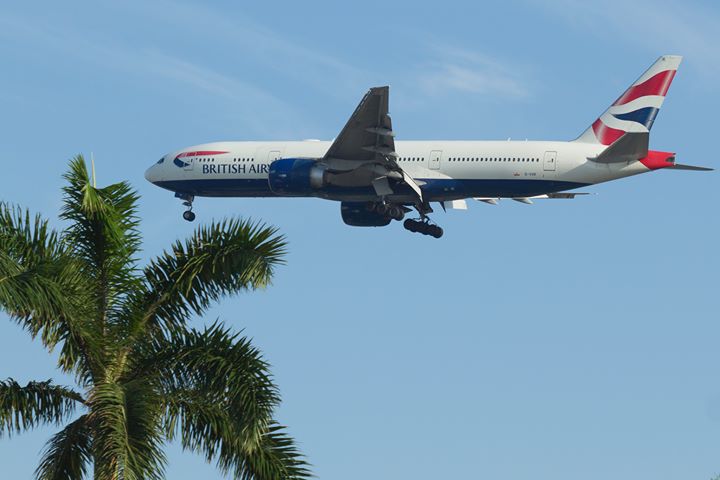 Thanks to Loop reader, Helen Jones for sending over this amazing shot!

"It's surreal, how the arrival of one flight could mean so much," said a local resident of the arrival of a British Airways flight to Cayman yesterday afternoon, carrying vital supplies for the Islands including urgent pharmaceuticals, personal protective equipment and test kits. The flight also returned 58 Caymanian students and other residents to the Island.

Governor Martyn Roper said: “This flight has taken considerable effort to arrange at a time when moving people and consignments around the world is a global challenge. Its arrival has enabled vital supplies to be delivered to Cayman and increases our capacity for testing. It has also allowed many people to return home to both Cayman and Bermuda."

Since the airport shut down to incoming flights on March 22, this has been a physical reminder that we are still very much connected to the outside world and are supported by the United Kingdom.

On arrival, the passengers were checked by Public Health and were immediately transferred by bus to a government quarantine facility. Those who are remaining in Cayman will remain in highly supervised isolation for 14 days, after which they will be tested for Covid-19 before being able to return to their family homes.

"The utmost care will be taken to isolate those returning travellers to limit the risk to the population to the absolute minimum," said the Governor.

Before landing on Grand Cayman the BA flight made a scheduled stop in Bermuda allowing 129 Bermudans to return home and for supplies to be delivered to the Overseas Territory.

The plane will also allow for a UK advisory team to travel to the Turks and Caicos Islands, to provide medical, operational and security expertise to local authorities.

The return leg of the flight departs this afternoon where 131 people of varying nationalities will leave Cayman for London Heathrow. The flight will make a stop in Nassau where it will collect 44 British Nationals and other European passengers who wish to be repatriated to or via the UK.

"I am grateful for the support of the Premier in allowing this flight to land and to everyone who has been involved in its planning. I would like to thanks Andre Ebanks and his team at the Cayman Islands Government Office in London, Matthew Forbes, head of my office and his team and British Airways for outstanding collaboration and teamwork to make this happen in difficult circumstances,” said the Governor.