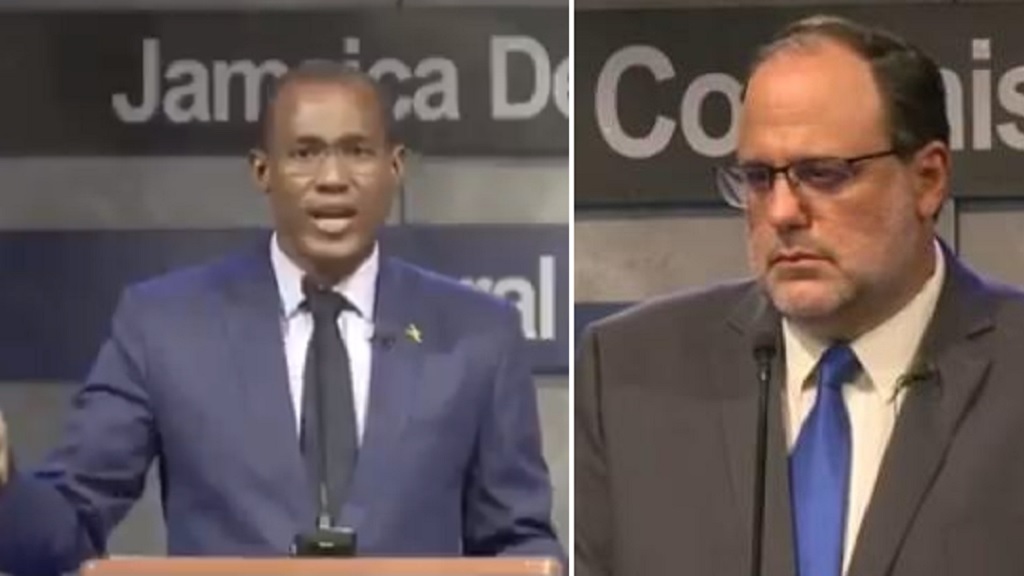 "It is simply not credible, it misses the mark, and it is a big bag of tricks," Clarke argued as he squared off with Mark Golding, the Opposition spokesperson on finance, during a debate on economic issues.

On Wednesday, the PNP released its development plan for Jamaicans, if it forms the government after the September 3 General Election. The initiatives are to be pursued under the party’s water, employment, access, land ownership, technology, housing and youth (WEALTHY) plan.

The plan is to, among other things, deposit $4,000 into the electricity and water residential accounts of some 360,000 families across the island, provide home improvement grants in the amount of $400,000 for some 10,000 low-income families annually, deliver land titles to the landless, and focus on major impact programmes for the youth.

But in his rebuttal to Golding's answer at the debate on funding for the WEALTHY plan, Clarke argued that it would cost approximately $100 billion.

"When you look at their proposal, easily over five years, it would easily cost a $100 billion just from a few items. The resources of government come from you the people. When they were last in office for four years, they levelled $53 billion of taxes and that is the only way from them to finance this," explained a fiery Clarke.

"When they finished taxing the Jamaican people to finance their $100 billion of expenditure, all of Jamaicans will be left with a little bit of money," he added.

The finance minister then went on to verbally attack PNP leader, Dr Peter Phillips, who he described as the "architect of destruction".

Clarke posited, "He [Golding] talks about [Phillips] being architect of recovery, if Peter Phillips has anything to do with it [the WEALTHY Plan], he is the architect of destruction."

Earlier, when asked by a journalist how the PNP would fund the party's WEALTHY Plan in light of the COVID-19 pandemic, Golding disclosed that his party would turn to the discretionary component of the annual budget.

"We have looked at the budget and the way the budget is constructed with basically an $800 billion expenditure budget of which roughly $280 billion is discretionary spending...," he explained, adding, "We have said we will prioritise the people and the people's agenda, putting people in the centre of development and we have costed our plan at roughly a little less than 30 per cent of the discretionary component of the budget."

Golding indicated that if his party should form the next government, no new taxes will be imposed to fund the WEALTHY Plan as "Jamaica is in a deep recession".

Additionally, he suggested that the country was "in a crisis at this time and we cannot impose taxes on the people at this time, because it would be counter productive with the object being to return the country to positive growth".

Golding, however, revealed that some projects will be prioritised, while others will be scaled back.

Meanwhile, Clarke was also asked about the funding of the Jamaica Labour Party's multi-billion dollar grants and support packages promised in its 'Stronger Future' manifesto.

He explained that he would be utilising funds available for capital expenditure.

"The capital expenditure, where we have greater discretion, accounts for about $25 billion of new capital expenditure that is not programmed, and that will cover six new science, engineering and technology academies and [a] new performing arts academy making out town centres, putting the infrastructure for WiFi and also one or two other pieces of capital expenditure," Clarke explained.

He added: "As far as recurrent expenditure is concerned, new central government recurrent expenditure not yet accommodated for, we're talking about approximately five billion dollars, and that five billion dollars cover the cost of operationalising the free WiFi in town centres, operationalising our daycare centre proposal as well as the grants that are not yet programmed with $500 million for communities, $2 billion out of the three for fisherfolk. The rest has been accounted for already."

But Golding, in rebuttal, said the JLP had not credibly answered how they would finance their promises.

He instead postulated that the PNP's measures, contained in its WEALTHY Plan, would take Jamaica out of the difficult challenges it was facing due to the COVID-19 pandemic.

As analysis of the finance and economic debate continues, observers have so far rapped Golding for being mostly unimpressive and flat through the night, while Clarke was mostly seen as fiery, clear and concise in some of his answers.

Questions ranged from several areas of finance and economy, including the sliding Jamaican dollar, alternatives to achieving economic growth, and policies surrounding taxation.

The debates staged by the Jamaica Debates Commission began on Tuesday with the team debates, featuring Dr Christopher Tufton, Kamina Johnson-Smith and Floyd Green of the JLP going up against Lisa Hanna, Dr Dayton Campbell and Raymond Pryce of the PNP.

On Saturday night, the big two, Prime Minister Andrew Holness and Opposition Leader, Dr Peter Phillips, will go head to head in the final debate ahead of the polls.