Anthony Bourdain, remembered on what would have been his 64th birthday 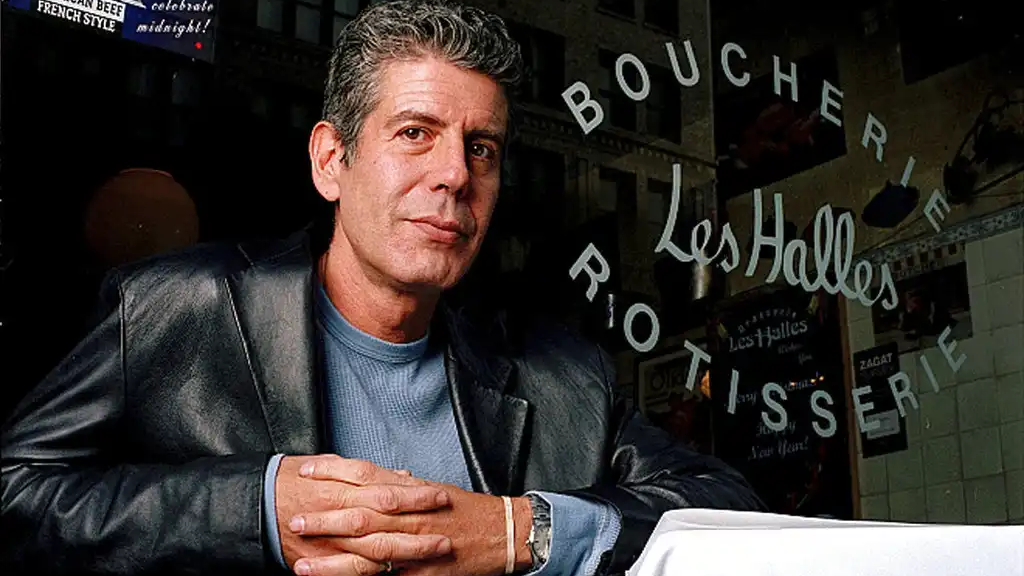 FILE - This Dec. 19, 2001 file photo shows Anthony Bourdain, the owner and chef of Les Halles restaurant, sitting at one of the tables in New York. (AP Photo/Jim Cooper,File)

Many people thought Anthony Bourdain had the most enviable career in existence. He didn't deny it. "I have the best job in the world," the globe-trotting food-taster and culinary storyteller once told the New Yorker magazine, stating the rather obvious. "If I'm unhappy, it's a failure of imagination."

In the culinary world, June 25 was Anthony Bourdain Day, following the announcement from Jose Andres and Eric Ripert, his longtime friends that he would be commemorated each year on his birthday. This year he would have been 64.

Bourdain's fans continue to mourn the loss of the New Jersey chef following his death from an apparent suicide on June 8 2018, recalling everything from his fearless consumption of a beating cobra's heart or a sheep testicle — "like any other testicle," he remarked — to his outspoken support of the #MeToo movement, to his blissful paean to syrup-soaked pecan waffles at Waffle House.

"I want it all," he wrote in his breakthrough 2000 memoir, "Kitchen Confidential." ''I want to try everything once." And it seemed that he pretty much accomplished that, travelling the globe some 200 days a year for his TV shows, revelling not in fancy tasting menus — which he scorned — but in simple pleasures like a cold beer and spicy noodles in Hanoi, which he once shared with former President Barack Obama. For him, food, though a huge pleasure, was, more importantly, a storytelling tool, and a passport to the world at large.

It was a lifestyle that, while undeniably glamorous, took a toll, he suggested in a 2017 New Yorker profile. "I change location every two weeks," he said. "I'm not going to remember your birthday. I'm not going to be there for the important moments in your life."

Not surprisingly, it was on the road, in eastern France, that Bourdain, 61, was found unresponsive one morning, just over two years ago, by good friend and chef Eric Ripert. He'd been working on an episode for the 12th season of his CNN show, "Parts Unknown." A prosecutor said he had apparently killed himself in a luxury hotel in the ancient village of Kaysersberg. He left behind an 11-year-old daughter, Ariane, from his second marriage. In a 2008 interview with The Associated Press, Bourdain had said his daughter's birth had changed his outlook on life: "I feel obliged to at least do the best I can and not do anything really stupidly self-destructive if I can avoid it." At the time of his death, his girlfriend was Italian actress, Asia Argento.

In an essay written after fellow chef Mario Batali was accused of sexual assault, Bourdain wrote that "one must pick a side ... I stand unhesitatingly and unwaveringly with the women." Argento wrote on Twitter Friday that Bourdain "was my love, my rock, my protector."

Traversing the globe meant visiting areas of conflict and also intense poverty, and Bourdain didn't shy away from either. In "No Reservations" on the Travel Channel, he went to Haiti after the devastating earthquake in 2011, and reflected on his ambivalence at being there. "I'm there talking about local cuisine, and that means I'm shovelling food into my face ... that a lot of those people can't afford," he said. And he described how his well-meaning efforts to feed locals around him led to chaos and "hungry kids being beaten with a stick."

There was, of course, a more lighthearted side to his travels, including some wild and bizarre eating experiences. In Morocco, it was that roasted sheep's testicle. In Canada, it was a raw seal's eyeball. In Namibia, it was the wrong end of a warthog (he wound up with a parasite.) In Vietnam, it was the still-beating heart of a cobra that had just been sliced open.

Much closer to home — Bourdain lived in New York, when he wasn't travelling — was a late-night visit to Waffle House in Charleston, South Carolina, described in poetic terms by Bourdain as "an irony-free zone where everything is beautiful and nothing hurts; where everybody regardless of race, creed, colour or degree of inebriation is welcomed." Sampling the pecan waffle drowning in butter and maple syrup, he exclaimed, "This is BETTER than French Laundry, man," referring to the Napa Valley temple of high cuisine.

But he thrived in restaurant kitchens, and that work led him to the Culinary Institute of America, where he graduated in 1978. He eventually became executive chef at Brasserie Les Halles in 1998. In the preface to the latest edition of "Kitchen Confidential," Bourdain wrote of his shock at the success of his book, which he managed to write by getting up at 5 a.m. before his kitchen shifts.

"The new celebrity chef culture is a remarkable and admittedly annoying phenomenon," he wrote. "While it's been nothing but good for business ... few people are less suited to be suddenly thrown into the public eye than chefs."

But Lagasse became his friend, and he tweeted Friday: "Tony was a great soul, a mentor, a friend, a father, and an incredible chef." His friend Ripert, the famed chef of Le Bernardin, called him "an exceptional human being, so inspiring and generous, one of the great storytellers of our time who connected with so many." Saul Montiel, the executive chef at the Mexican restaurant Cantina Roof Top in Manhattan, called Bourdain "one of the few chefs that valued the work of Latinos in the kitchen."

Countless more wrote of their shock and sadness. Some noted that Bourdain's death came just days after the suicide of fashion designer Kate Spade, also a great shock to those who knew her. Bourdain's own mother, Gladys Bourdain, a longtime editor at The New York Times, said she had no indication that her son might have been thinking of suicide.

Loop's interview with Woody Foster about food and grocery supplies