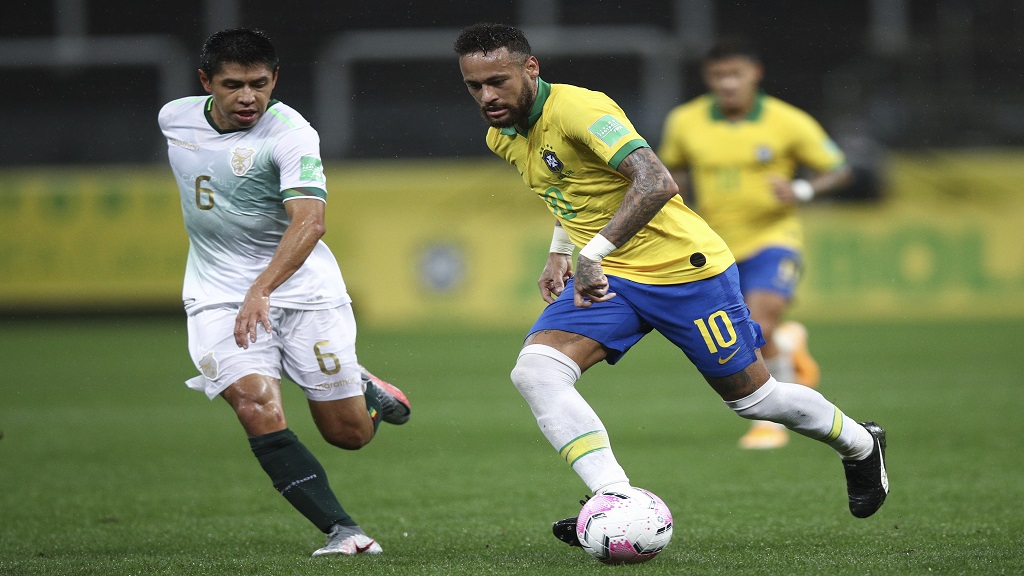 Brazil's Neymar, right, runs with the ball as Bolivia's Diego Wayar challenges him during a qualifying football match for the FIFA World Cup Qatar 2022 at the Neo Quimica arena in Sao Paulo, Brazil, Friday, Oct. 9, 2020. (Buda Mendes/Pool via AP).

Brazil and Colombia had no trouble on Friday beating two of the weakest South American teams to score their first wins in the opening round of World Cup qualifiers. The matches took place without fans due to health protocols from the COVID-19 pandemic.

Brazil easily beat Bolivia 5-0 in rainy Sao Paulo while Colombia scored all of their goals in a 3-0 victory in the first half in Barranquilla.

After the first round, Brazil, Colombia, Uruguay and Argentina lead with three points. Peru and Paraguay have one. Ecuador, Chile, Venezuela and Bolivia have none.

All five matches in the second round will be played on Tuesday: Peru vs Brazil, Bolivia vs Argentina, Chile vs Colombia, Ecuador vs Uruguay and Venezuela vs Paraguay.

Neymar, experiencing back pain ahead of the match and who was only confirmed in the starting lineup at the last minute, had two assists. He had more trouble with the pouring rain in Sao Paulo than with Bolivia's chaotic defenders who barely touched him during the match.

Defender Marquinhos opened the scoring in the 16th minute with a header. Roberto Firmino netted the first of his two goals in the 30th minute, just pushing the ball into an empty goal after a low cross from Renan Lodi.

Firmino made it 3-0 in the 49th minute, assisted by Neymar, putting the ball between the legs of goalkeeper Carlos Lampe. Then 19-year-old striker Rodrygo scored his first for the national team with a header in the 66th minute.

Philippe Coutinho ended the rout in the 73rd minute with a header, also assisted by Neymar.

“The team took this very seriously, we were very respectful,” said Brazil captain Casemiro. “We still need to improve teamwork. Match by match we will get it."

Bolivia left some of their players in La Paz, looking towards the clash against Argentina at altitude. The team is in crisis due to a political dispute involving the country's football body and major teams.

The match in Barranquilla was marked by a serious left-ankle injury to Colombian defender Santiago Arias after he tackled Venezuelan striker Darwin Machis in the first few minutes.

Machis was initially sent off, but video review reversed the decision after it became clear the Venezuelan had not touched Arias.

Colombia showed why they are one of the favourites for one of the four direct South American berths in the Qatar 2022 World Cup in the 16th minute when Duván Zapata calmly scored from close range after a low cross by Juan Cuadrado.

Ten minutes later Johan Mojica bulldozed through the Venezuelan defense from the left and assisted Luis Muriel to add a second with a classy right-foot touch.

Venezuela coach José Peseiro, who was in charge of the team for the first time, could not do much in the second half — he met most of the players only days ago. His predecessor Rafael Dudamel left the job at the beginning of the year after a dispute with the country's football body.

“Since the first minute we imposed our game and that's why we won,” Zapata said. “Also, a good team is one that defends well. Today that was the key. Holding our lines in the back allowed us to use our talent up front.”