Caribbean Women in Sport: Morwenna on her passion for archery 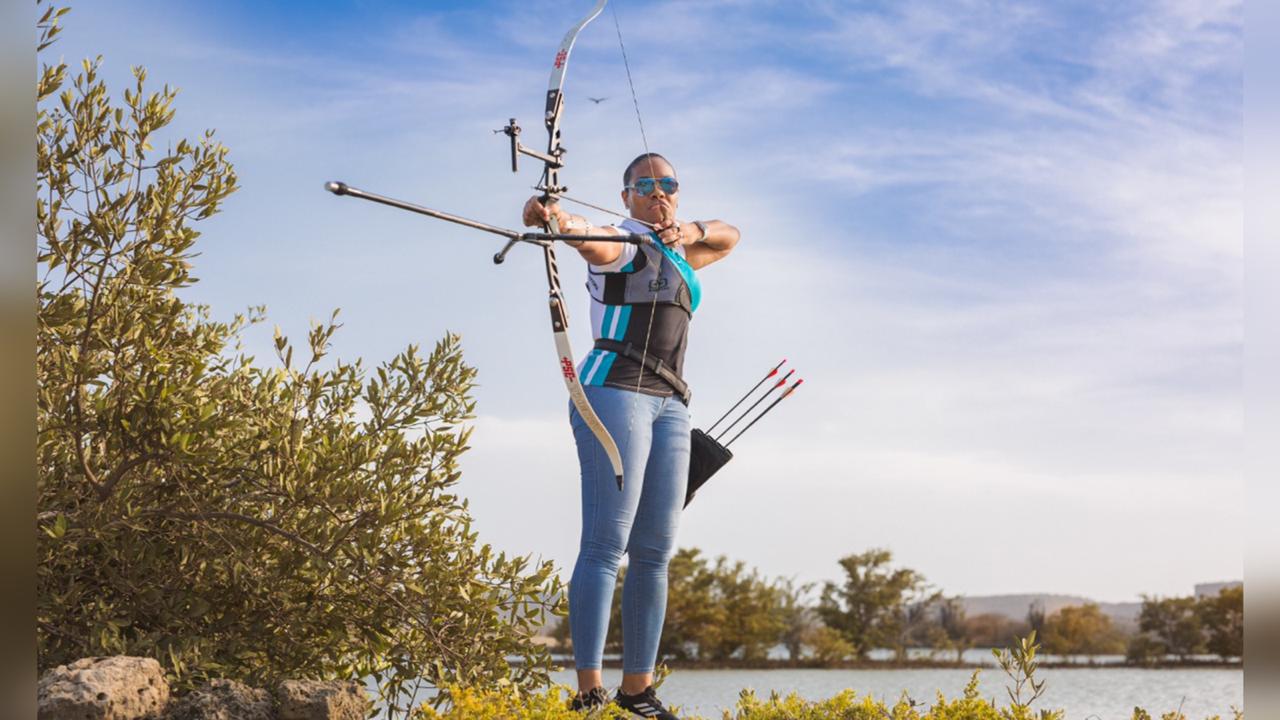 “Archery is not just a sport or practise, it’s an art, elegant yet fierce. It’s a way of life!”

That’s according to one of Curacao’s premier archers, Morwenna Minguel-Meijer.

She told Loop: “It all started when I got a videogame called Track & Field II on the very first Nintendo platform. It consisted of many of the Olympic sports, including archery. I would always choose archery and before long I was really good at it. I wanted to do what I was doing in the videogame. A lot of math elements were involved. Wind direction, elevation, how much do you draw according to the distance you were shooting… No matter the difficulty, I succeeded. I always hit the bullseye”

Morwenna said she mastered the sport through a video game and wanted nothing more than to test her skills on an actual field.

Unfortunately at the time, there was no way for her to practice the sport on-island.

Even so, her passion for archery never died.

Years later she happened across a Facebook page inviting applications for the Curaçao Archery School so she signed up.

Morwenna said when she threw her first arrow, there was no turning back. She’s been practising ever since.

The Curacao Archery School was founded by Domingo Wever in 2015.

Prompted by his love for the sport he started it in his backyard.

Morwenna said having observed his commitment to teaching those interested and raising awareness of the sport in Curacao, she needed to contribute to his efforts. 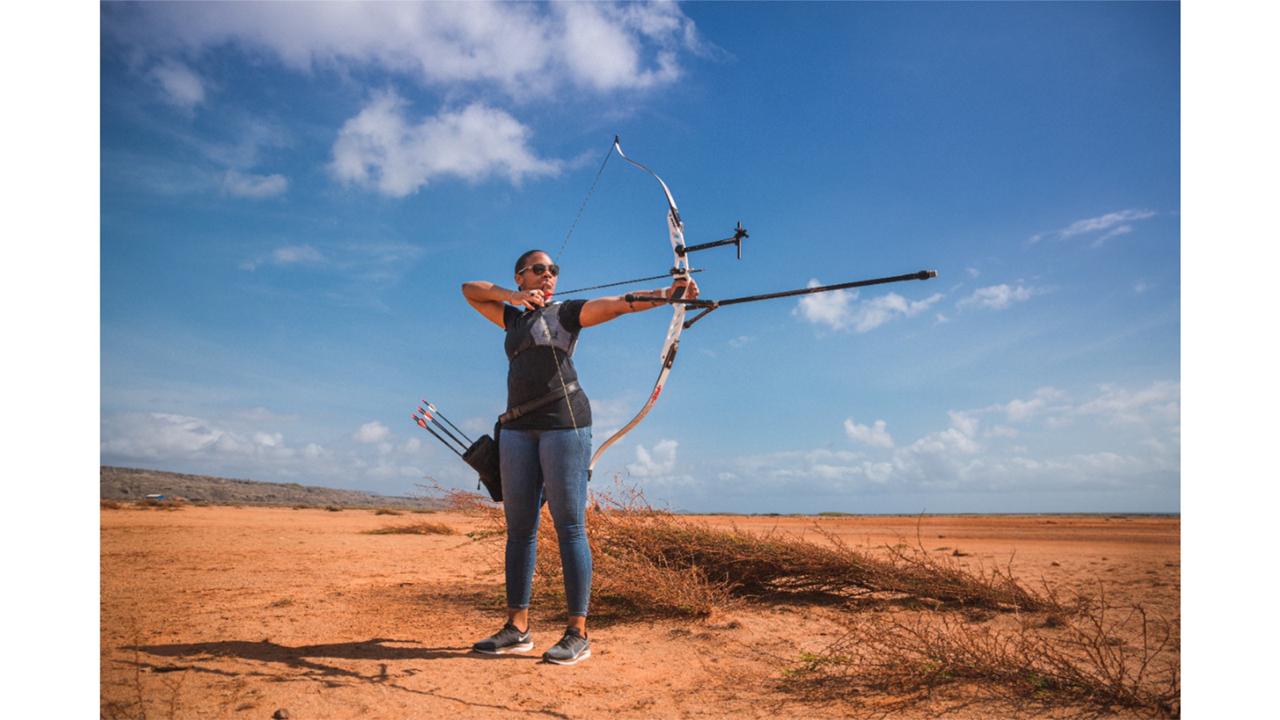 “I am known for making things happen. Coach wanted more members, a bigger place to be able to shoot longer distances, become a federation and so much more. So I took all of this and started to do something about it. I studied the sport and expressed my interest in becoming a level 1 and 2 Archery instructor. But due to the COVID-19 pandemic, it was postponed. And guess what, everything was set for a coach from Trinidad and Tobago to come to Curacao to provide the course in becoming a level 1 and 2 archery instructor in May 2020. I hope that he’s still able to come this year as we do need extra instructors if we want the school to grow. I’ve created social media platforms to promote the sport and our growing school on the island. So yes, my hands are full, and it’s my utmost pleasure to give a helping hand to our coach.”

The passionate archer said they are now one step closer to realising their dreams to expand the school.

“We started with the process of becoming a Federation and we’re also planning to organize a workshop at our neighbouring islands Aruba and Bonaire with the ultimate goal of opening a school in Aruba.”

Archery is a huge part of her life but there’s so much more to Morwenna.

Born and raised in Willemstad, Curaçao she told Loop that as an only child she was the apple of her parents' eyes.

She credits her success and the essence of who she is to their unwavering love and support.

“I was this skinny girl with huge glasses. Yes, I was a nerd. I was an A-student, always top of my class, from elementary through high school.

My favourite childhood memory would be that I started practising Taekwondo and Iaido since I was 6 years old. By the time I was 12, I was the first female martial artist to obtain a blackbelt in both arts. I appeared in International Taekwondo magazines. To me, even though I hated to be the centre of attention, no one would dare mess with the skinny nerd at school. I was friends with everyone. I treated everyone equally, the popular ones and outcasts, I still do. It’s one of my foundations, treat everyone equally and with respect.” 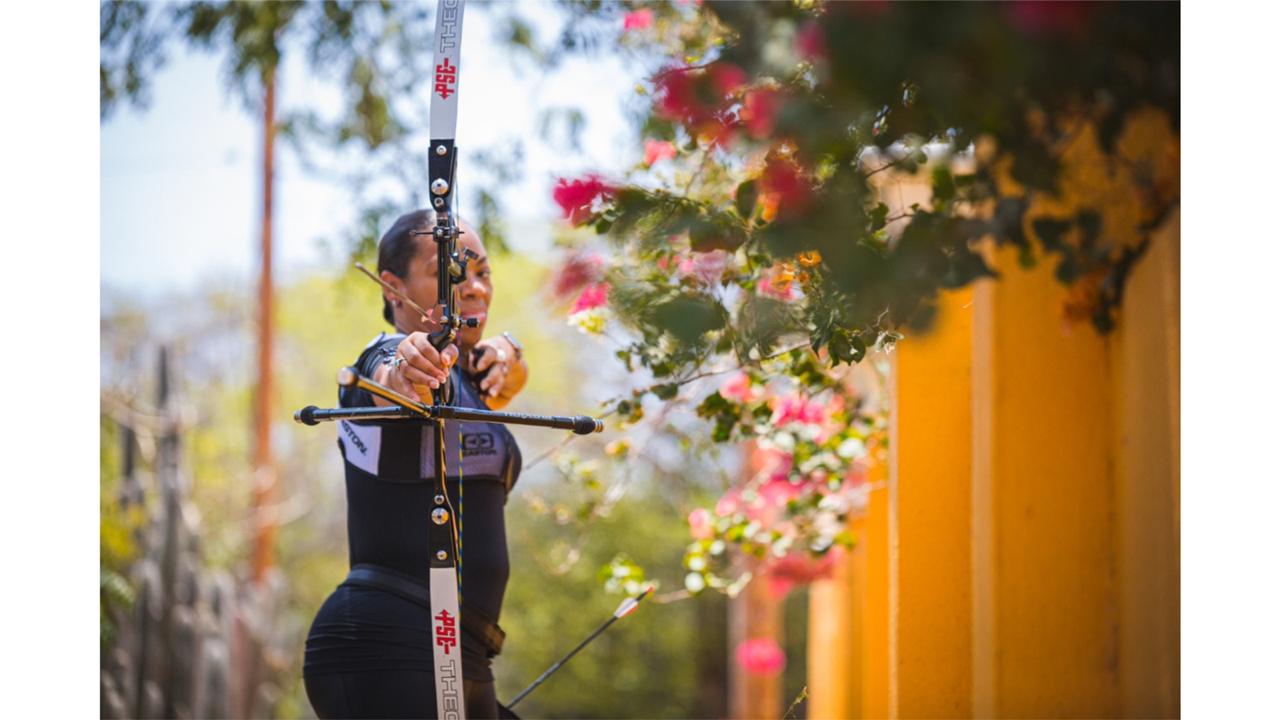 Now 39 years old, Morwenna is happily married and has a daughter of her own.

She’s employed at the Dutch Caribbean Air Navigation Service Provider (DC-ANSP) where she is tasked with training Air Traffic Controllers.

“I’ve been working at DC-ANSP for 13 years now. Of course, I’ve had my ups and downs, but it was the love for my job that kept me there. It was my first ‘official’ job. If it will be my last? I don’t know what the future holds. But if I tell you that since I was 4 years old, I already knew what I wanted to be, you’d be surprised. I wanted to become a Gynaecologist/Obstetrician. I was obsessed with that profession.

I was so ready to pursue my dream and then I changed my mind, one year before leaving to the Netherlands for my studies. I didn’t want to study for 12 years before I could work as a gynaecologist/obstetrician. Back then, I thought I would become too old before I would start to work. Hahahaha...it’s so funny when I think of it now.

Any regrets? No, not at all. But I still admire that profession.”

Morwenna was the first female martial artist from Curacao to qualify for the Olympic games.

She was scheduled to represent her country at the 2000 Olympics, but as fate would have it, she suffered an injury while training.

Despite the disappointment, Morwenna said she drew strength from her family who supported her through rehabilitation.

She said one of the greatest takeaways from experience, is that despite the best-laid plans, things can be delayed or derailed.

What's important she said, is ones ability to recover and move on. 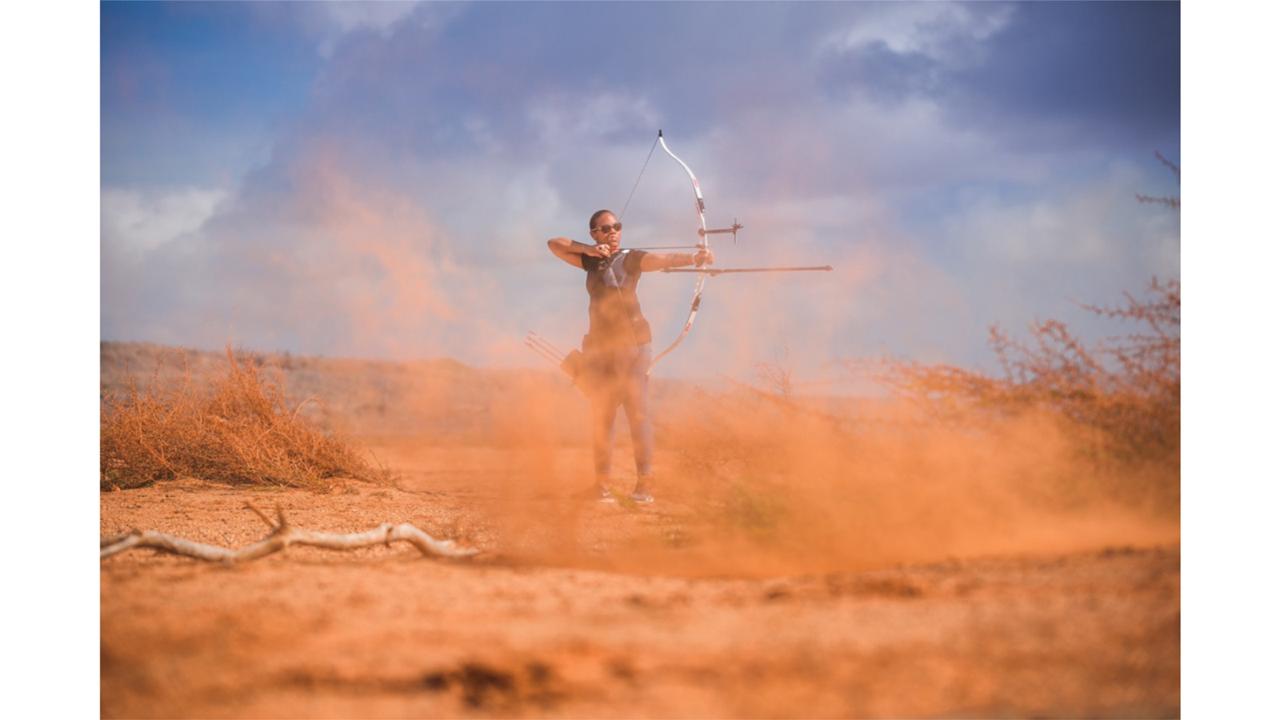 “I have a back problem, a condition called scoliosis and I have been dealing with this since I was 11. Everything was fine until I got pregnant with my daughter. The perfect posture that I was taught for so many years was gone and the problems worsened to the point that if I sit for too long, I will lose feeling in my legs. Even though I am treating this with heavy physiotherapy, the best medicine is to be constant on the move. Archery, the form and posture you need to draw a bow, is helping my back greatly. And even though it took me a while to get accustomed to the movement as it something you don’t do every day, I didn’t let it intimidate me, let alone stop me. I studied the form and technique to its core and I have learned to adapt to execute it the best way I can. My challenge has always been my back...but I have managed to use it to my advantage In archery that it made me an ambidextrous archer.”

So what's next for Morwenna?

She plans to pursue courses that’ll allow her to coach up and coming archers and organise archery workshops in Aruba and Bonaire.

“In the meantime, I’ll keep practising, keep perfecting my form, and technique and who knows, maybe you’ll be seeing me in Trinidad competing like we did last year in December 2019. Even though I did not participate, I was so proud that we took home 3 silver medals for our country. The next tournament, I’ll be there, to meet new people, to learn and of course, to win!”

A message for the youth

Morwenna hopes to be an example to up and coming archers in Curacao.

She had this message for the young people in her country:

“Don’t let anyone change who you are. You are unique, and destined for great things. Find something you love and do it with passion. Give it your all and never give up.

And most importantly, you have something free yet so powerful in your hands. It’s called free will. Use it wisely because no one can tell you or force you to something you don’t want to do but yourself. Stand up for what you believe. Because everyone has the power to make a difference in this world.”

Curaçao has a population of approximately 160 thousand.

Morwenna said at present only 28 people practice archery on the island.

She has accelerated her efforts to raise awareness and encourage participation in the sport that she loves so much.

"I have launched Facebook and Instagram pages, Archery in Curaçao, to create more awareness of the sport on the island. And it’s working!” 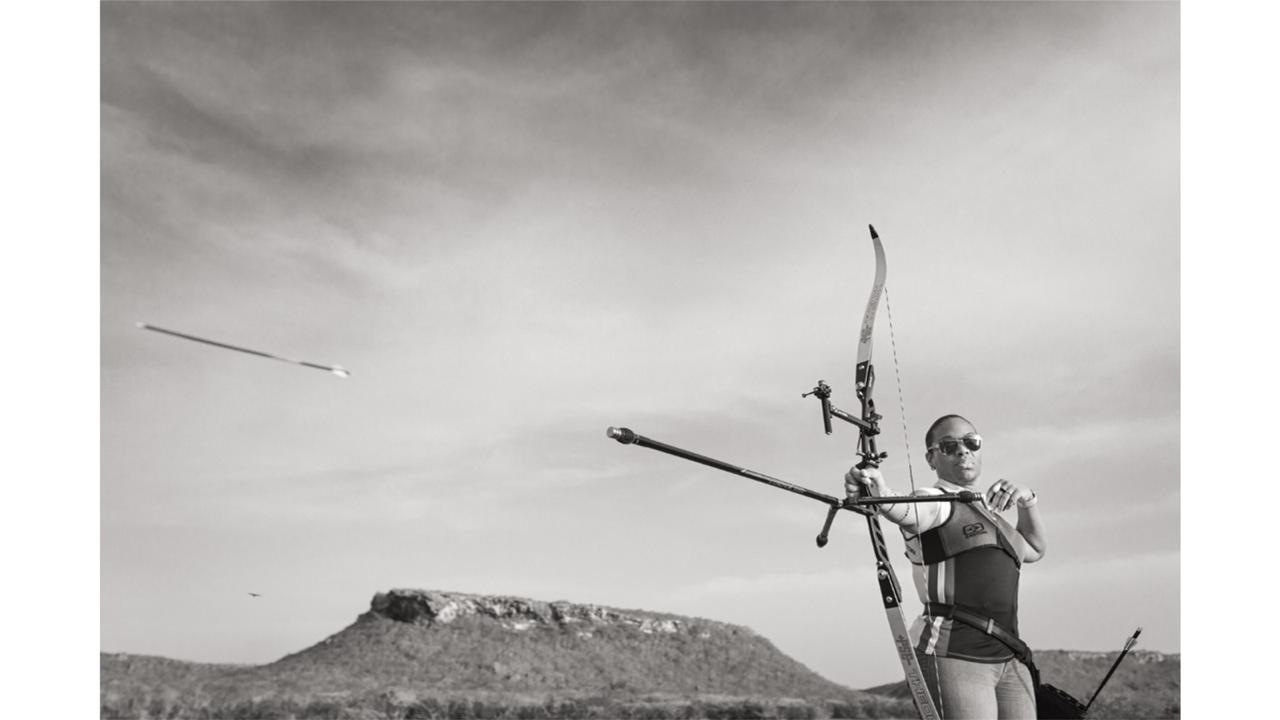 Contrary to popular belief, Morwenna said archery is not a dangerous sport.

In fact, she claims its one of the safest sports in the world.

“Believe it or not, according to the National Safety Council statistics, it’s safer than golf and even bowling. Safety is the number one priority when practising the sport. If you practise good form and follow all the safety rules, you will eliminate almost all risk of archery injuries.”

She said archery is ranked as one of the worlds most inclusive sports.

“You can start at any age, the moment you’re tall enough to hold a bow and you can keep shooting until the age of 90. At our club, we have a senior who’s over 70 years old and he beats me all the time! It's one of the few sports that can accommodate people with various injuries and disabilities. For those who call me Robin Hood, I don’t feel flattered. Robin Hood’s technique is all wrong, hahaha.”

Joseanne's story of success in the face of COVID-19

Love and loss in the time of COVID-19: A mother speaks