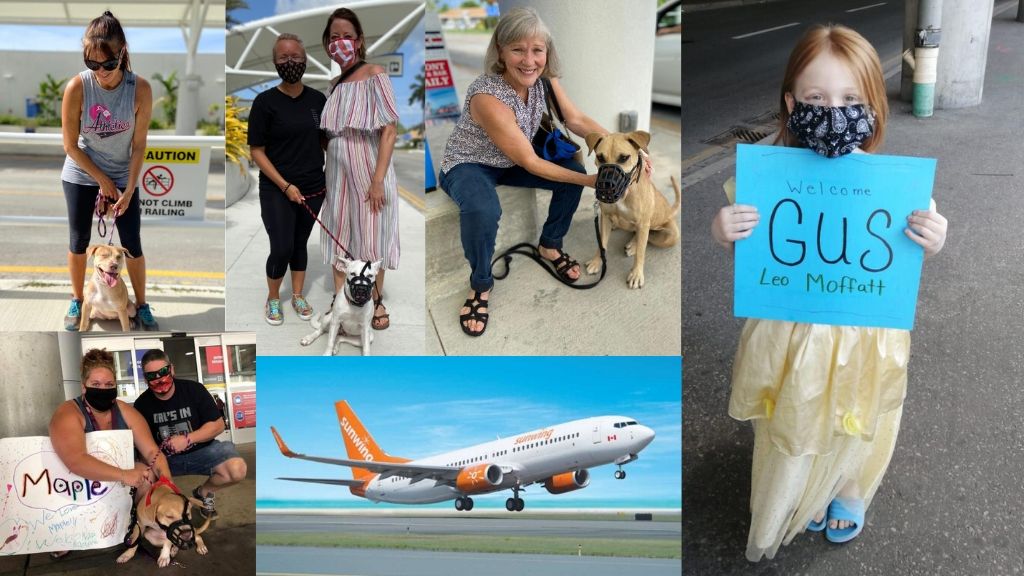 What do the Ritz Carlton Grand Cayman, animals on a euthanisation list and little girls in princess dresses have in common? They all played a role in the most recent Noah’s Ark Cayman-Canada flight, organized by locally-based Canadian, Nikole Poirier.

The Sunwing charter — that arrived in Cayman this past Monday with 27-inbound passengers and departed with 116 people, 23-rescue animals and 54-animals in total — was described by Poirier as “a wild one”.

“This one was 10,000-times harder than the other,” she said. “I didn’t have to lean as much on others, or so I thought, because I had done this before... so I thought it would be so much easier, but there were a few changes in procedures that made this one much harder.”

The first-ever Noah’s Ark flight organised by Poirier carried 117 human and pet passengers to Toronto Pearson Airport on May 22 and was described by Poirier at the time as organised “without a hitch”— a contrast to the myriad of obstacles faced in organising the July 13 Sunwing flight.

For starters, Poirier had to deal with the move to a new travel registration system that occurred somewhat late in the organisation process. The new intake form did not go up until July 1 and the deadline for the south-bound manifest for the Sunwing private charter was July 3.

“I felt like I was starting from scratch even though the flight had been planned six weeks out and my passengers had already completed the other forms,” recalled Poirier.

Another major challenge faced was in securing accommodations to isolate inbound passengers.

This ultimately resulted in a number of passengers being forced to make the difficult decision to not return to Cayman at this time because the cost to quarantine was simply too prohibitive.

“There was a helper on that flight, people in the food and beverage sector,” said Poirier. “They could not afford the cost to quarantine.”

Of the 20 government rooms that Poirier said were initially offered, only 6 were ultimately used to quarantine inbound Caymanian passengers and permanent residents.

This left 21 inbound passengers with the only other option presented, which was to quarantine at The Ritz Carlton (Grand Cayman). The group consisted of three permanent residents and a dependent of a permanent resident and 14 work permit holders and their dependents, nine of which were Cayman International School staff and their families.

The incoming school staff were justifiably overwhelmed by the rates being charged at the Ritz Carlton, which ranged from $9,000 to $15,000 for the two week quarantine period, including meals.

The Cayman Islands International School advocated on behalf of their staff and were able to organise quarantine accommodations at the Palm Heights hotel.

“I certainly bit off more than I could chew,” said Poirier, laughing at some of the challenges she faced. “There were also people with pet allergies that were nervous about being accused of having COVID-19 if the pets were to trigger a cough or a sneeze. Some of them ultimately backed out for that reason.”

Like its predecessor, this flight had its fair share of animals, but unlike the previous one, many were rescued, including four of which were on the euthanisation list. Another of the dogs that found a spot on the flight was the product of a group rescue from severely abusive circumstances.

“There were not as many personal pets on this flight as the previous one, so I reached out to the Humane Society and we managed to rescue 23 pets that included 10 cats and 13 dogs, including a rescue from One Dog at a Time that had already been adopted by someone in Canada,” Poirier explained.

Many of the animals had foster families waiting for them at Toronto Pearson Airport. It was a sight to behold with little girls in their princess dresses waiting for their new animals at the airport.

The Peel Area Rescue Society (PARS) in Toronto worked with Poirier to facilitate the transfer of the rescues. In Noah’s Ark project one, there were six large pets allowed that were to be muzzled with pee pads. Because the first charter went off without a hitch, Sunwing was able to grant Poirier an allowance for an unlimited number of large dogs — which ultimately brought the total count of large dogs to 28 with muzzles. Thirteen of them were rescues and 15 were personal pets.

There were also 16 personal pets in carriers and 10 rescue cats on the flight.

The logistical challenge was to find escorts for all the rescues. This required pairing off passengers with animals. At the very last minute, there were 16 cancellations which meant that some of the pets would now be unaccompanied. Ultimately, some kind passengers stepped up and served as their escorts. Most of these were individuals with connecting flights who inconvenienced themselves to help.

“I have immense gratitude for these people who had to wait in the hot sun to be paired with a pet. I am so grateful to every one of the pet escorts,” said Poirier.

Poirier has already begun to make preparations for the next charter flight. This one will not be a Noah’s Ark Project flight but a project Return to School flight. It will take place on August 22 and is being arranged for students heading back out to school in Canada.

Poirier has extended her gratitude to the Humane Society, One Dog at a Time, the Department of Agriculture that processed all the paperwork, Aimee from Must Love Dogs, all of the pet escorts, the governor’s office and officials from the public service, including the CBC, that supported her in this very challenging and “wild” adventure.