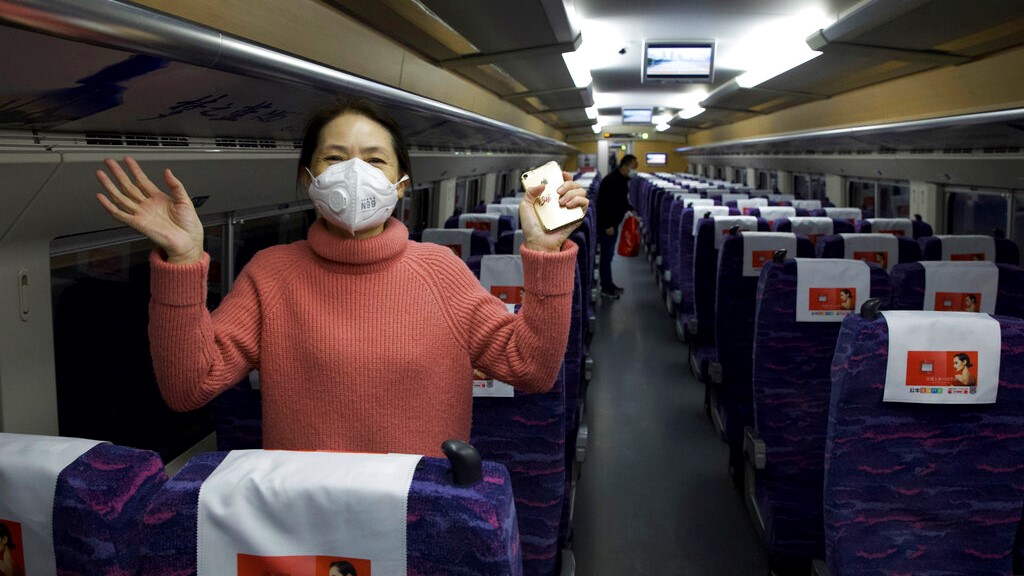 A passenger wearing a face mask to protect against the spread of new coronavirus talks about how happy she is to leave her 76-day stay in lockdown in Wuhan as she boards the first high-speed train to leave Hankou train station after the resumption of train services in Wuhan in central China's Hubei Province, Wednesday, April 8, 2020. (AP Photo/Ng Han Guan)

After 11 weeks of lockdown, people went outdoors and by the thousands boarded the first trains and planes leaving Wuhan as the last restrictions on movement were lifted Wednesday in the Chinese city where the coronavirus pandemic began.

Wuhan's unprecedented lockdown was a model for countries trying to stop the coronavirus. With the restrictions ending, Hubei's provincial capital begins another experiment: resuming business and ordinary life while preventing more illnesses.

The city's 11 million residents are now permitted to leave without special authorization as long as a mandatory smartphone application powered by a mix of data-tracking and government surveillance shows they are healthy and have not been in recent contact with anyone confirmed to have the virus.

The occasion was marked with a light show on either side of the broad Yangtze River, with skyscrapers and bridges radiating animated images of health workers aiding patients, along with one displaying the words "heroic city," a title bestowed on Wuhan by president and Communist Party leader Xi Jinping. Along the embankments and bridges, citizens waved flags, chanted "Wuhan, let's go!" and sang a capella renditions of China's national anthem.

"I haven't been outside for more than 70 days," said an emotional Tong Zhengkun, who was watching the display from a bridge. Residents in his apartment complex had contracted the virus, so the entire building was shut down. He couldn't go out even to buy groceries, which neighbourhood workers brought to his door.

"Being indoors for so long drove me crazy," he said.

It didn't take long for traffic to begin moving swiftly through the reopened bridges, tunnels and highway toll booths, while hundreds waited for the first trains and flights out of the city, many hoping to return to jobs elsewhere. Nearly 1,000 vehicles went through a busy highway toll booth at Wuhan's border between midnight — when barricades were lifted — and 7 am, according to Yan Xiangsheng, a district police chief.

Within hours of the lockdown ending, roughly 65,000 people had left the city by train and plane alone, according to local media.

Restrictions in the city where most of China's more than 82,000 virus cases and over 3,300 deaths from COVID-19 were reported have been gradually eased in recent weeks as the number of new cases steadily declined. The government reported no new cases Wednesday.

While there are questions about the veracity of China's count, the unprecedented lockdown of Wuhan and Hubei have been successful enough that other countries adopted similar measures.

"The people in Wuhan paid out a lot and bore a lot mentally and psychologically," resident Zhang Xiang said. "Wuhan people are historically famous for their strong will."

During the 76-day lockdown, Wuhan residents had been allowed out of their homes only to buy food or attend to other tasks deemed absolutely necessary. Some were allowed to leave the city, but only if they had paperwork showing they were not a health risk and a letter attesting to where they were going and why. Even then, authorities could turn them back on a technicality such as missing a stamp, preventing thousands from returning to their jobs outside the city.

Residents of other parts of Hubei were allowed to leave the province starting about three weeks ago, as long as they could provide a clean bill of health.

Despite the new freedom, many prevention measures such as wearing masks, temperature checks and limiting access to residential communities will remain in place in Wuhan. And people leaving the city will face numerous hurdles, such as 14-day quarantines and nucleic acid tests, at their destinations.

In an editorial, the ruling Communist Party's flagship People's Daily warned against celebrating too soon.

"This day that people have long been looking forward to and it is right to be excited. However, this day does not mark the final victory," the paper said. "At this moment, we still need to remind ourselves that as Wuhan is unblocked, we can be pleased, but we must not relax."

In anticipation of the lockdown's lifting, SWAT teams and staff in white hazmat suits had patrolled outside the city's Hankou railway station, while guards attended a security briefing under the marble arches of its entrance.

Tickets for trains out of Wuhan to cities across China already were advertised on electronic billboards as loudspeakers blared announcements about social distancing and wearing masks. About 100 passengers boarded the first train leaving Hankou station, bound for Jingzhou, another city in Hubei.

According to airport official Lou Guowei, the first departing flight left Wuhan Tianhe International Airport at 7.25 am for Sanya, a coastal city in Hainan province known for its beaches.

Wuhan is a major centre for heavy industry, particularly autos, and while many major plants have restarted production, the small and midsize businesses that employ the most people are still hurting from both a lack of workers and demand. Measures are being instituted to get them back on their feet, including 20 billion yuan ($2.8 billion) in preferential loans, according to the city government.

China blocked people from leaving or entering Wuhan starting January 23 in a surprise middle-of-the-night announcement and expanded the lockdown to most of the province in succeeding days. Train service and flights were cancelled and checkpoints were set up on roads.

The drastic steps came as the coronavirus began spreading to the rest of China and overseas during the Lunar New Year holiday in late January, when many Chinese travel.

The exact source of the virus remains under investigation, though many of the first COVID-19 patients were linked to an outdoor food market in the city.

In preparation for the end of the lockdown, Party Secretary Wang Zhonglin, the city's highest-ranking official, inspected the airport and train stations Monday to ensure they were ready. The city must "enforce prevention while opening up, maintain safety and orderliness and the assurance of stability," Wang said.

Mission one: to make sure the epidemic doesn't resurge, he said.