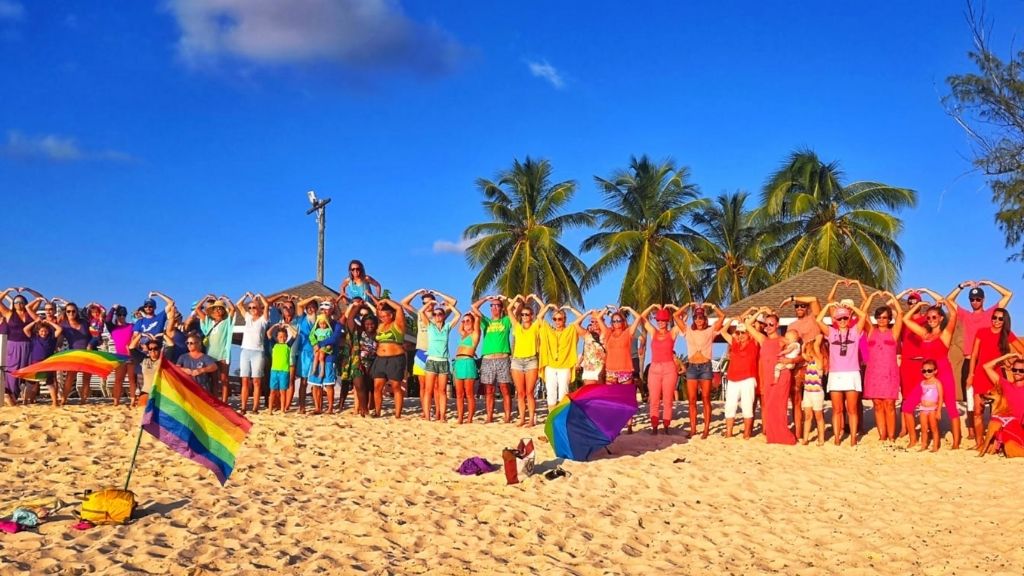 "Thank you so much to everyone who came out to Seven Mile Beach to shine with us today!!! Let's show all of the Cayman Islands that we are a community that is #VisiblyStrong!"

These were the words of thanks from LGBTQIA+ non-profit, Colours Cayman for the show of solidarity by more than 100 Caymanians this past Sunday, who arrived at West Bay public beach dressed in colours of the rainbow, to reject hate and hate speech, particularly of the type that has been recently circulating in Cayman.

Families, kids, teachers, a variety of religions and races, the young and the old were all represented at the event.

"We wanted to show that most kids and teens in Cayman, whether LGBTQ or not, don't stand for hate," said sisters, Devon, 13, and Drew, 12, who came out to support the event.

"Words cannot capture how inspired I was by today's event," said Billie 'Bee' Bryan, Founder of Colours Cayman, who organized the event entitled, 'Let the Sun Set on Hate.'

"The sight of so many people lined up on the beach, side by side, standing loud and proud to face the sun together in solidarity with our LGBQTIA+ community is one that I will not soon forget. And it speaks volumes to the amount of support that we have here."

Supporters of the event lined up on the beach, each dressed in a colour of the LGBTQ pride flag and took a photo on the shoreline to commemorate the day, just about an hour before the sun set in the most dramatic presentation.

"I applaud those with the courage and strength to come out with us and be visible, as an ally or especially as someone from our marginalised community. I'm well aware that there are many who are still frightened to be seen and for good reason but I hope this peaceful and loving demonstration today assures them that they are accepted and supported here, despite the vitriol that has been so prevalent around our islands recently," said Bryan.

There has been much confusion surrounding the difference between hate speech and free speech, in the Cayman Islands, resulting in minimal to no policing of online hate speech.

Free speech means the right to seek, receive and share information and ideas with others. Hate speech, particularly online, is directed at those targeted as being ‘the other’, often dehumanising them. Hate speech perpetrators often see ‘the other’ as the enemy and a cause of problems in society. If something targets a group or person because of an aspect of their identity, it is Hate Speech.