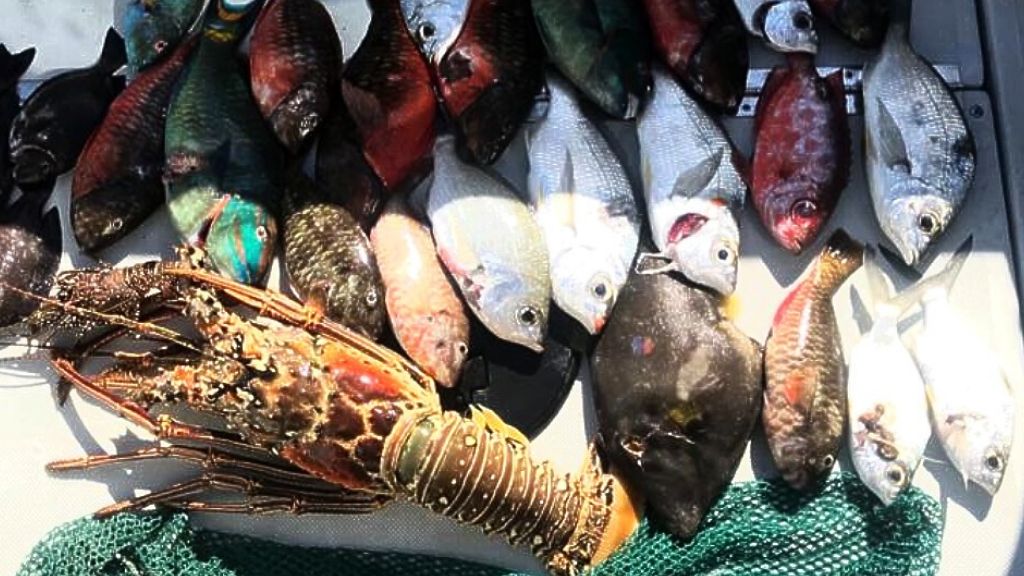 DoE Conservation Officers discovered two males taking marine life with the aid of an unlicensed spear gun. Officers recovered 25 fish of various species and two lobsters, one of which was a protected species.

The Cayman Islands Department of Environment's seven officers in Grand Cayman and three staff in the Sister Islands have been on duty throughout the lockdown period patrolling seven days a week by land and sea, using patrol vehicles and boats manned by single officers.

Despite observing social distancing, a number of individuals have been caught breaking the National Conservation Law and each has been warned for intended prosecution.

"A warning for intended prosecution is similar to an arrest in that the case will be going to court, but unlike an arrest, it does not require an officer to take the suspect in custody for booking and bail. The suspect will be served with a summons at a later date to appear in court," explains Mr Scott Slaybaugh, Deputy Director of Operations & Enforcement at the Cayman Islands Department of Environment.

Earlier in the week, while on boat patrol in the Marine Park Zone near North West Point, DoE Conservation Officers discovered two males taking marine life with the aid of an unlicensed spear gun. Officers recovered 25 fish of various species and two lobsters, one of which was a protected species. A homemade unlicensed spear gun was also recovered. The males were escorted to shore where they were Warned for Intended Prosecution for several breaches of the National Conservation Law.

Mr Slaybaugh warns that “Speargun licence-holders who do not follow their licence conditions risk losing the privilege to possess these weapons. They may also face prosecution under the NCL for such lapses.”

The Deputy Director has stressed that he is aware that these offences are being linked to the current economic crisis. "Many have expressed opinions that people are hungry so the law should not be enforced," he says.

"While we sympathize with those who have lost their income, it is interesting to note that poaching incidents have declined compared to pre-COVID19 days, and the recent offenders are the same people who were habitual poachers prior to the curfews."

The Department of Environment looks forward to relaxed curfew restrictions that will allow people to fish and asks everyone to comply with the regulations for protected species, size and catch limits, restricted areas and legal fishing methods.

Without Stingray City attraction, the DoE feeds, plays with rays