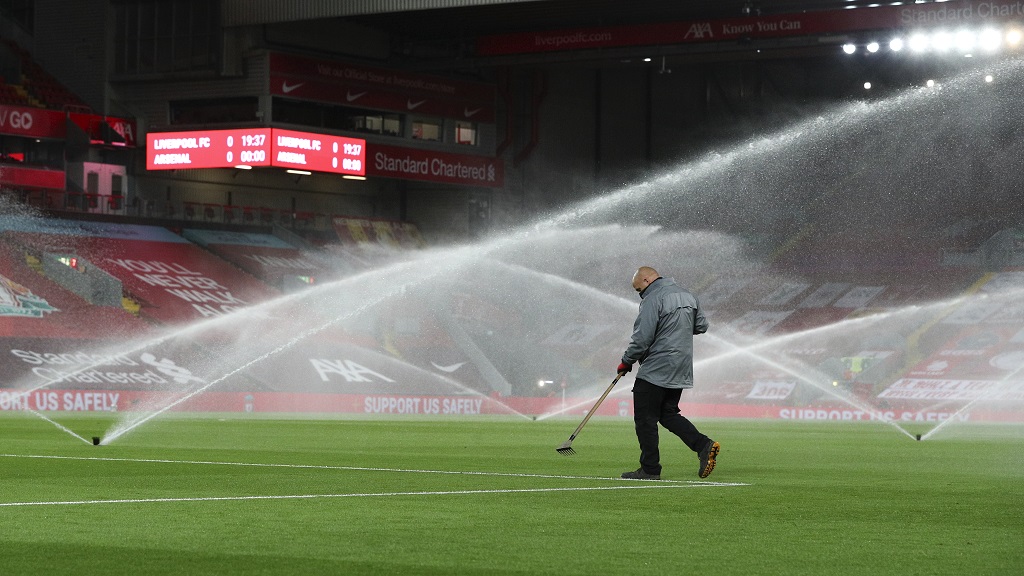 A groundsman works on the pitch ahead of the English League Cup fourth round football match between Liverpool and Arsenal at Anfield, Liverpool, England, Thursday, Oct. 1, 2020. (Peter Byrne/Pool via AP).

The head of English football said he walked away from talks about a reshaping of the leagues being spearheaded by Liverpool and Manchester United over their pursuit of more power and threats to break away from the Premier League.

Greg Clarke, the chairman of the Football Association, on Tuesday, acknowledged his part in discussions about “Project Big Picture," which only become public on Sunday.

The plans — if approved — would see the Premier League distribute more cash to the 72 professional teams in the English Football League. But woven into the proposals is transformation of the power structures in the Premier League. The number of teams would reduce from 20 to 18, and the nine longest-serving clubs would gain more control — with only six having to approve changes.

“In late spring, when the principal aim of these discussions became the concentration of power and wealth in the hands of a few clubs with a breakaway league mooted as a threat,” Clarke wrote to members of the FA Council, "I of course, discontinued my involvement and counseled a more consensus-based approach involving all Premier League clubs and its chair and CEO. Our game needs to continually seek to improve but benefits need to be shared.”

The Premier League said the plans formed by Liverpool and United's American owners with EFL chairman Rick Parry would be damaging for the English game. The FA could block the overhaul of leagues by using its “Special Share” in the Premier League, that was created in 1992 by a breakaway from the EFL.

“There is more to our game than economics,” Clarke said. “Change must benefit clubs, fans and players; not just selective balance sheets. In these difficult times unity, transparency and common purpose must override the interests of the few.”

United and Liverpool have left Parry to advocate the plan in public, while staying silent themselves.