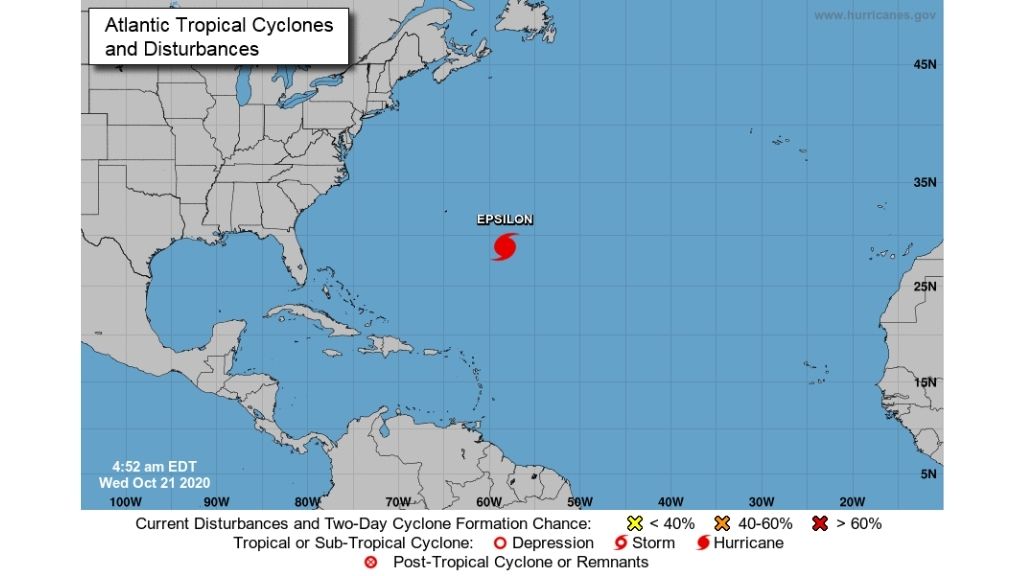 Hurricane Epsilon has strengthened to a Category 1 storm as it continues to move toward Bermuda, threatening the island with dangerous swells.

The storm is forecast to approach but stay east of Bermuda, where its powerful winds could still be felt and have prompted a Tropical Storm Watch. On the forecast track, the center of Epsilon is forecast to make its closest approach to Bermuda Thursday afternoon or evening.

"While it is too soon to determine the exact details of Epsilon's track and intensity near the island, tropical storm conditions are possible on Bermuda beginning Thursday with dangerous surf conditions also likely," said the National Hurricane Center (NHC).

At 500 AM EST, the center of Hurricane Epsilon was located near latitude 28.9 North, longitude 58.3 West. Epsilon is moving toward the west-northwest near 14 mph (22 km/h), and this motion at a slower forward speed is expected through today.

Maximum sustained winds have increased to near 85 mph (140 km/h) with higher gusts. Some additional strengthening is possible today, followed by little change in strength into the weekend.

The NHC advises that dangerous surf and rip currents are likely on Bermuda, the Bahamas, the Greater Antilles, Leeward Islands, east coast of the United States, and Atlantic Canada during the next few days.

Epsilon, which formed in the Atlantic Ocean on Monday, is now the 10th Atlantic hurricane this year and the 26th named storm of the hurricane season.

5 AM AST Wednesday, October 21 Key Messages for Hurricane #Epsilon. Dangerous surf and rip currents are likely on Bermuda, the Bahamas, the Greater Antilles, Leeward Islands, east coast of the United States, and Atlantic Canada during the next few days. https://t.co/22MmuRtUyj pic.twitter.com/Twd6IJrfPm