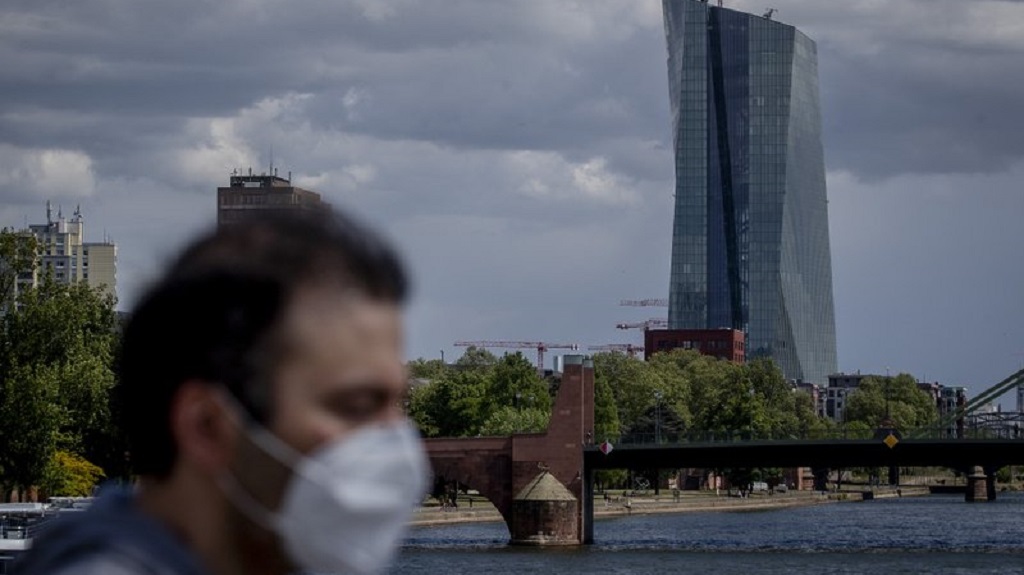 A man walks in front of the European Central Bank in Frankfurt, Germany, Wednesday, April 29, 2020. The ECB will have the meeting of the governing council on Thursday. (AP Photo/Michael Probst)

The European economy shrank by a record 3.8 percent in the first quarter as business activity from hotels and restaurants to construction and manufacturing was frozen by shutdowns aimed at preventing the spread of the coronavirus.

The drop in the 19-country eurozone was the biggest since statistics began in 1995 and sharper than the plunge in the midst of the global financial crisis in the first quarter of 2009 after the bankruptcy of US investment bank Lehman Brothers.

The drop compares to a 4.8 percent contraction in the US during the first quarter as the shock from the outbreak hits economies around the world.

Unemployment rose only slightly, however, even amid the massive shutdowns that idled everything from florists to factories.

Millions of workers are being supported by temporary short-hours programs under which governments pay most of their salaries in return for companies agreeing not to lay people off.

US unemployment rose to 4.4 percent in March from 3.5 percent in February, though the eventual picture is likely far worse.

First-time claims for unemployment benefits have skyrocketed in the US as 26 million people applied through the first three weeks of April.

The statistics in Europe likely understate the depth of the fall since shutdown measures were mostly put in place only in March, the last of the three months in the quarter.

Figures from France suggested the extent of the downturn.

The economy shrank 5.8 percent, the most since the country's statistics agency INSEE began keeping the figures in 1949.

The drop was particularly pronounced in services that involve face to face interaction, such as hotels and restaurants, retail stores, transportation and construction.

The figures come ahead of a meeting of the European Central Bank, which analysts think may expand its bond purchase program that supports governments and borrowing markets.

That decision may not come Thursday but markets are awaiting an assessment from bank head Christine Lagarde.

The Latest: More than 1 million European cases of virus