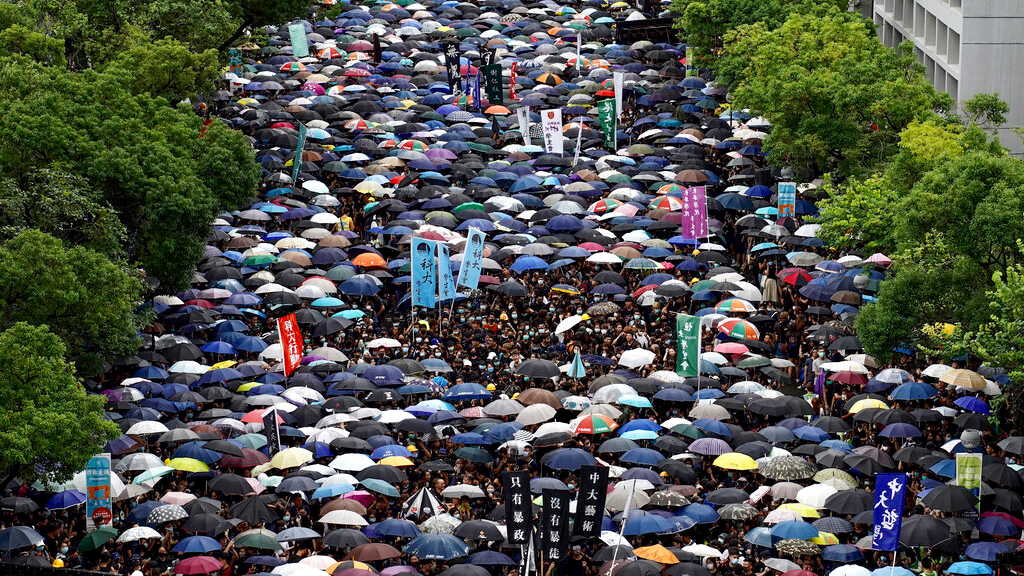 Thousands of students formed human chains outside schools across Hong Kong on Monday to show solidarity after violent weekend clashes between police and activists pushing for democratic reforms in the semiautonomous Chinese territory.

The silent protest came as the Hong Kong government condemned the "illegal behaviour of radical protesters" and warned the US to stay out of its affairs.

Thousands of demonstrators held a peaceful march Sunday to the US Consulate to seek Washington's support, but violence erupted hours later in a business and retail district as protesters vandalized subway stations, set fires and blocked traffic, prompting police to fire tear gas.

Hong Kong's government agreed last week to withdraw an extradition bill that sparked a summer of protests, but demonstrators want other demands to be met, including direct elections of city leaders and an independent inquiry into police actions.

Protesters in their Sunday march appealed to President Donald Trump to "stand with Hong Kong" and ensure Congress passes a bill that would impose economic sanctions and penalties on Hong Kong and mainland China officials found to suppress democracy and human rights in the city.

Hong Kong's government expressed regret over the US bill, known as the Hong Kong Human Rights and Democracy Act. It said in a statement Monday that "foreign legislatures should not interfere in any form in the internal affairs" of Hong Kong.

The government said it was "very much in Hong Kong's own interest to maintain our autonomy to safeguard our interests and advantages under the 'one country, two systems' principle" introduced when the former British colony returned to Chinese rule in 1997.

The unrest has become the biggest challenge to Beijing's rule since it took over Hong Kong, and is an embarrassment to its ruling Communist Party ahead of October 1 celebrations of its 70th year in power. Beijing has slammed the protests as effort by criminals to split the territory from China, backed by what it said were hostile foreigners.

Trump has suggested it's a matter for China to handle, though he also has said that no violence should be used. Political analysts suggest his response was muted to avoid disrupting talks with China over their tariff war.

High school and university students across Hong Kong held hands on Monday, following similar protests last week, forming long human chains that snaked into the streets outside their schools. They were joined by many graduates wearing the protesters' trademark black tops and masks.

Many also rallied against what they viewed as excessive use of force by police, with one student carrying a placard that read "Stop violence, we are not rioters."

Anger was fueled over the weekend after images of a youth being bloodily beaten up by riot police at a subway station were widely shared on social media. The boy, who didn't fight back, was pinned to the floor and appeared unconscious under a pool of blood.

Police public relations chief Tse Chun-chung said Monday that police have received complaints about the case and are investigating. He said police were doing their best to handle escalating violence, with "radical" protesters attacking police and trying to snatch their weapons. He said 157 people had been detained since Friday.

Separately, well-known Hong Kong activist Joshua Wong was released Monday, a day after he was detained at the airport.

Wong, a leader of Hong Kong's 2014 pro-democracy protest movement, was among several people held last month and charged with inciting people to join a protest in June. His prosecution comes after his release from prison in June for a two-month sentence related to the 2014 protests.

A court said Wong's overseas trips had been approved earlier and his detention was due to procedural errors.

Wong, who visited Taiwan last week, told reporters before he flew off to Germany and then the US that he would continue to raise global awareness about Hong Kong's fight for democratic reforms.

German Foreign Minister Heiko Maas welcomed Wong's release and said he was prepared to meet him.

"We hope that the conflict there will be de-escalated bit by bit, but without that entailing the rights people are entitled to - namely the right to express their opinion, including on the street - in any way being limited," Maas told reporters in Berlin.