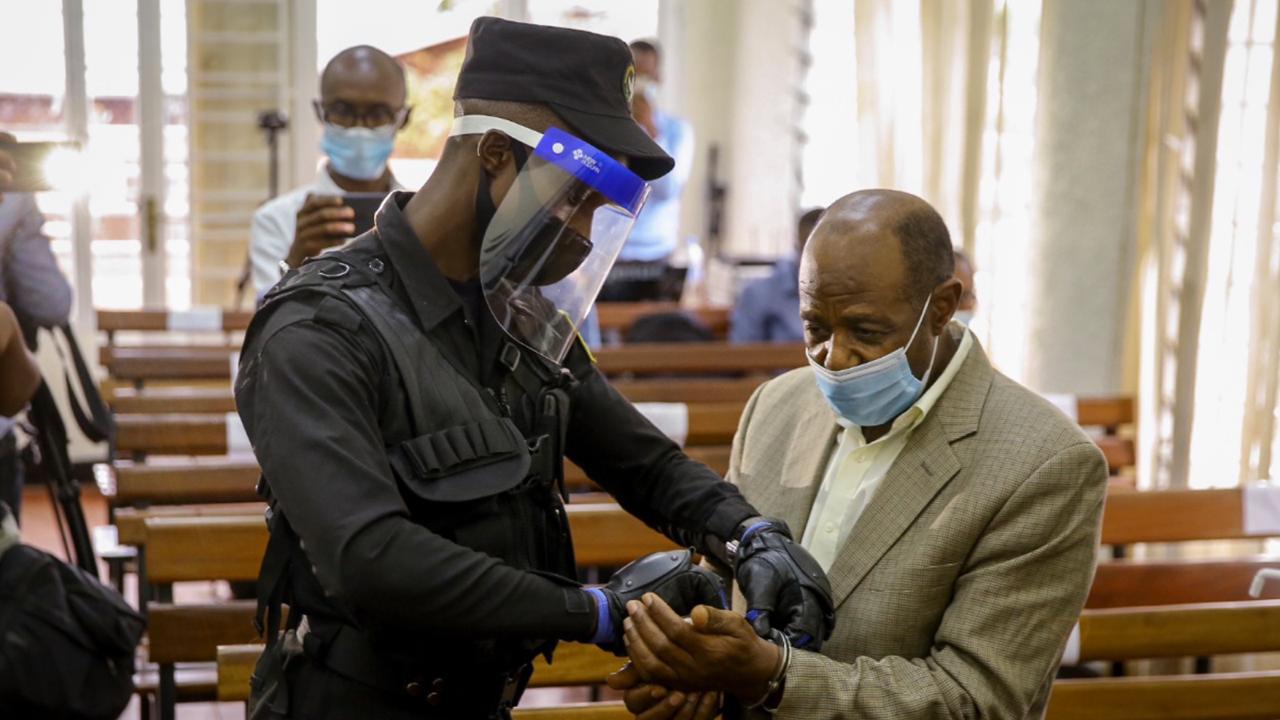 A policeman handcuffs Paul Rusesabagina, right, whose story inspired the film "Hotel Rwanda", before leading him out of the Kicukiro Primary Court in the capital Kigali, Rwanda Monday, Sept. 14, 2020.

A Rwandan court on Monday charged Paul Rusesabagina, whose story inspired the film “Hotel Rwanda,” with terrorism, complicity in murder, and forming an armed rebel group.

Rusesabagina declined to respond to all 13 charges, saying some did not qualify as criminal offences and saying that he denied the accusations when he was questioned by Rwandan investigators.

Rusesabagina, 66, asked to be released on bail, citing poor health that has caused him to be taken to hospital three times in the time that he has been held in Rwanda.

“I request that I am given bail and I assure the court that I will not flee from justice,” Rusesabagina said. The court said it will rule on his bail application on Thursday.

Rusesabagina, credited with saving more than 1,000 lives during Rwanda's 1994 genocide, appeared in handcuffs in Kagarama Court in the capital for a pre-trial hearing, in which the prosecution requested court permission to continue detaining him until investigations are completed.

Rusesabagina was represented by Rwandan lawyers David Rugaza and Ameline Nyembo, who have been discounted as a state-imposed representation by his family outside Rwanda.

Neither his lawyers nor the prosecution explained the circumstances under which Rusesabagina arrived in Kigali at the end of August from Dubai.

He had travelled from the U.S. to Dubai and then mysteriously appeared in Rwanda. The Rwandan court said the suspect was arrested at Kigali International Airport, contradicting the earlier police version that he was arrested through “international cooperation.”

When Rwandan President Paul Kagame spoke on national broadcasting about the case, he indicated that Rusesabagina may have been tricked I into boarding a private plane in Dubai that took him to Rwanda.

Amnesty International on Monday urged Rwandan authorities to guarantee Rusesabagina his right to a fair trial.

“The lack of transparency around the arrest of Paul Rusesabagina and reports that he has been denied access to the lawyer hired by his family are red flags that cannot be ignored as the authorities prepare for his trial,” said Deprose Muchena, Amnesty International’s Director for East and Southern Africa.

Rusesabagina’s daughter Carine Kanimba told The Associated Press that the family was not even aware he was to appear in court Monday as the state-appointed lawyers didn’t inform them. She said they learned of the court hearing through the media.

“This is a travesty of justice," Kanimba said of the hearing. Speaking on the phone from Belgium, she said her father was the victim of an abduction, disappearance, and extraordinary rendition from Dubai, in the United Arab Emirates to Kigali, Rwanda.

“The fact that Rwanda did not pursue Rusesabagina through lawful extradition proceedings suggests the authorities do not believe their evidence or fair trial guarantees would stand up to scrutiny before an independent tribunal, and so opted to circumvent the rule of law,” said Human Rights Watch's Central Africa director, Lewis Mudge.

Rusesabagina became famous for protecting more than 1,000 people as a hotel manager during Rwanda’s 1994 genocide in which some 800,000 Tutsis and moderate Hutus were killed. For his efforts, he was awarded the U.S. Presidential Medal of Freedom in 2005.

But Rwandan authorities accuse him of supporting the armed wing of his opposition political platform, which has claimed responsibility for deadly attacks inside Rwanda. Rusesabagina in the past has denied funding rebel groups and said he was being targeted over his criticism of Kagame’s government and alleged rights abuses.

Rusesabagina has not lived in Rwanda since 1996. He holds Belgian citizenship and is a permanent resident of the U.S., living in San Antonio, Texas.

Rusesabagina's family has appointed a team of international lawyers to represent him. Those lawyers are planning to fly to Rwanda laterthis week, said one.

“We hope that the Rwanda government will accept that we have visas for us to defend Mr Rusesabigna,” said Belgian lawyer Vincent Lurquin, in an interview with AP in Brussels. “But I have to tell you that the talks between the Belgian and the Rwandan authorities on that front have not progressed much.”

Lurquin said that neither Rusesabagina's lawyers nor his family have been able to speak to him privately.

“If we are alone together, he will be able to explain maybe how he ended up in Rwanda flying from Dubai,” said Lurquin. "It is not the first (time) that something like this happens with Belgian citizens, there are precedents. Every time Belgium said this was not something they could allow and those people were sent back.”

“It is a judiciary problem, and a political problem. So it is now time for states such as Belgium, as he has Belgian citizenship, but also the European Union and the United States, to wake up and tell President Kagame that this cannot be tolerated,” said Lurquin. “Where would we go if some states could just abduct nationals from other states?”

Of the upcoming trial, Lurquin said, "It is good that there is a trial, there is no problem there. He is not afraid of a trial, as we can prove that he is innocent. The only thing he is guilty of is to be an opponent to President Kagame and to be famous for saving so many Tutsis during the genocide. But this is not something legally punishable.”