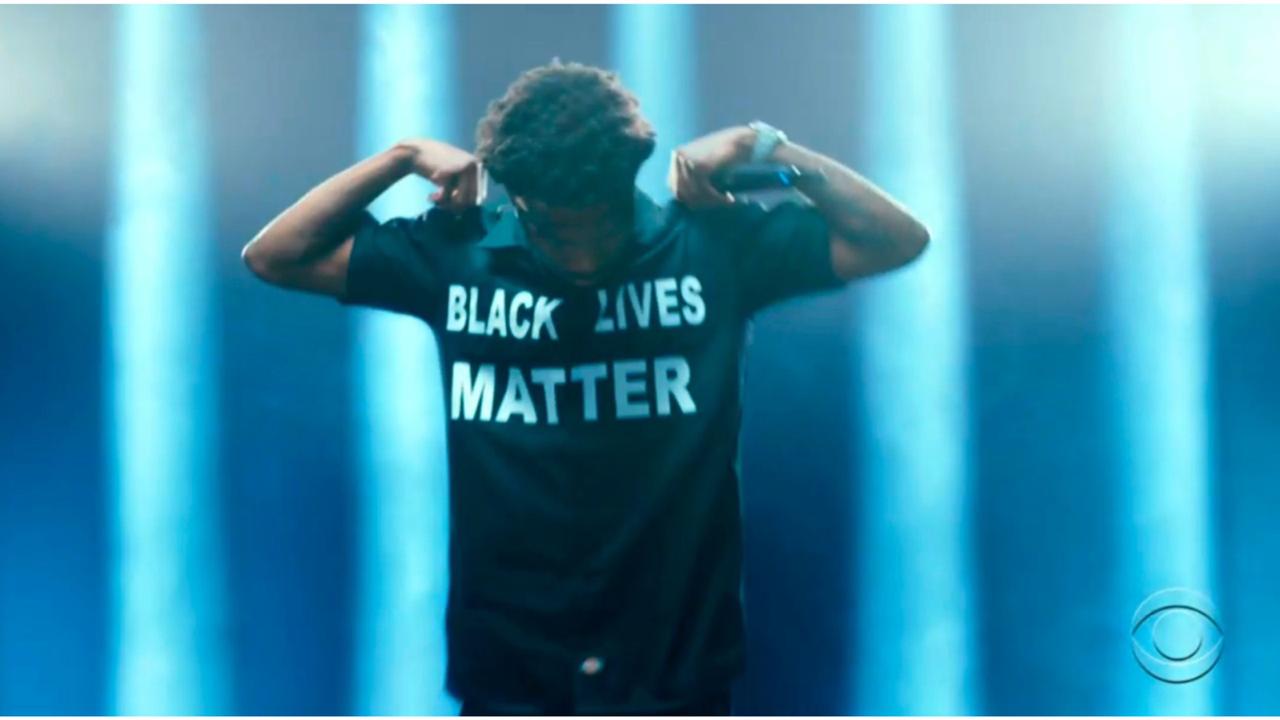 In this video grab issued Sunday, June 28, 2020, by BET, Roddy Ricch wears a shirt that says Black Lives Matter while performing during the BET Awards. (BET via AP)

You’d think trying to produce the 2020 BET Awards during the coronavirus pandemic would be filled with restrictions, but instead, show producers took another approach: We’re not limited to a single-stage, so the sky’s the limit and let your creative minds run free.

That’s the model the producers of the show ran with when crafting the special event, which was a major success Sunday night and one of the first virtual awards shows of the coronavirus era.

While abiding by safety guidelines and rules set in place by government officials to prevent the virus from spreading, the BET Awards featured highly produced, artsy pre-taped performances from DaBaby, Megan Thee Stallion, John Legend and Alicia Keys, while also addressing current issues in the world about the Black Lives Matter movement, police brutality and inequality.

“The irony of it is that we are in a situation where we are ‘locked down’ and can’t do this and can’t do that. But the truth is that, in this particular platform, it’s actually very freeing,” Jesse Collins, the longtime BET Awards producer, said in an interview Monday. “Creatively, it’s very freeing.”
Connie Orlando, BET’s executive vice president of specials, music programming and music strategy, echoed Collins’ thoughts.

“A show with COVID is challenging because of all the regulations and safety. Also, it takes the guardrail off. You’re not limited to just being in a venue on a 100-foot stage. You can kind of let your imagination go wild and really create art and pieces that are epic,” she said.

ViacomCBS, BET’s parent company, had a COVID-19 task force in place, which helped BET keep safety at the forefront of production. The show's production was monitored by lawyers and experts in production, safety and risk management.

“If we wanted to change something or do it in a different way, they would tell us,” Orlando said. “They’re looking at the federal guidelines, the state, local laws, as well as the unions.”

Sunday’s night show celebrated the 20th anniversary of the awards show and BET’s 40th year as a network. Orlando said though other networks cancelled awards shows and special events, BET was always going to try to hold on: “Never in my mind was it that we would cancel it.”

From its opening number, which included performers like Chuck D, Nas, Questlove and 12-year-old sensation Keedron Bryant rapping and singing about the Black experience to DaBaby’s gripping performance as he emulated the last few moments of George Floyd’s life by rapping as a police officer pressed his knee on his neck, the BET Awards stood out in a major way.

“Rather than the lo-fi, at-home performances from couches and kitchens that have become standard television fare during the Covid-19 crisis, BET provided budgets for its far-flung talent to produce remote segments that were often more like mini-music videos than the typical raw and sometimes glitchy live awards-show stagings,” the New York Times reported.
Orlando said BET’s nicely produced special “Saving Our Selves: A BET COVID-19 Relief,” which aired in April, helped the team prep for the BET Awards. “We learned in that one because that was the first time we were all home.”

Collins said they were developing the awards show for the last 2 1/2 months, but “things didn’t really come together until the last two weeks.”

“We were still locking and getting final performances on Saturday morning. It still kind of came in last minute,” he continued.

He said his team and the artists collaborated on each performance, trying to be as creative as possible. Collins said the performances were filmed “all across the country”: Keys taped her slot in downtown Los Angeles, Roddy Ricch filmed in Carlsbad, near San Diego, and Megan Thee Stallion brought the film “Mad Max” to life as she twerked and rapped in the desert.

“I think there was an expectation, well I know there was an expectation because I saw it on Twitter, that it was going to be very low production value, everybody at home, just not very engaging or exciting,” Collins said. “I just knew people wanted something different. When we started speaking to the artists about how we wanted to do this differently, the artist community responded back right away. Everybody was in. Nobody was really excited to perform on their couch or their backyard.”

DaBaby’s performance was the most striking, and Collins said as the world changed, so did the ideas for that performance.

“That creative, he threw it out. He came up with his new idea and he was super passionate about it and was very specific and knew exactly what he wanted. They shot it and he delivered. It was a breakout stand out moment,” Collins said.

The BET Awards have always been a stage where Black artists have spoken and sang about race, disparities and more, from Kendrick Lamar rapping on top of a police car with a large American flag waving behind him to Janelle Monae and Jidenna wearing large “I’m a Classic Man” signs around their necks, a reference to the historic “I Am a Man” civil rights era protest signs.

But this year, as the world continues to protest following the deaths of Floyd, Breonna Taylor and Ahmaud Arbery and others, speaking out boldly felt more relevant than ever.

“This year was almost like a perfect storm. I think over decades music and musicians have always used their art for activism ... (and) BET has always been the platform to amplify our voices,” Orlando said. “We freely and openly embrace that because that’s who we are as a network and what we always want to be to our audience and to the world. We are unapologetic and authentic.”

“To be able to be that platform during this time, like, my heart is just so full.”