Hurricane Douglas bears down on Hawaii as pandemic flares 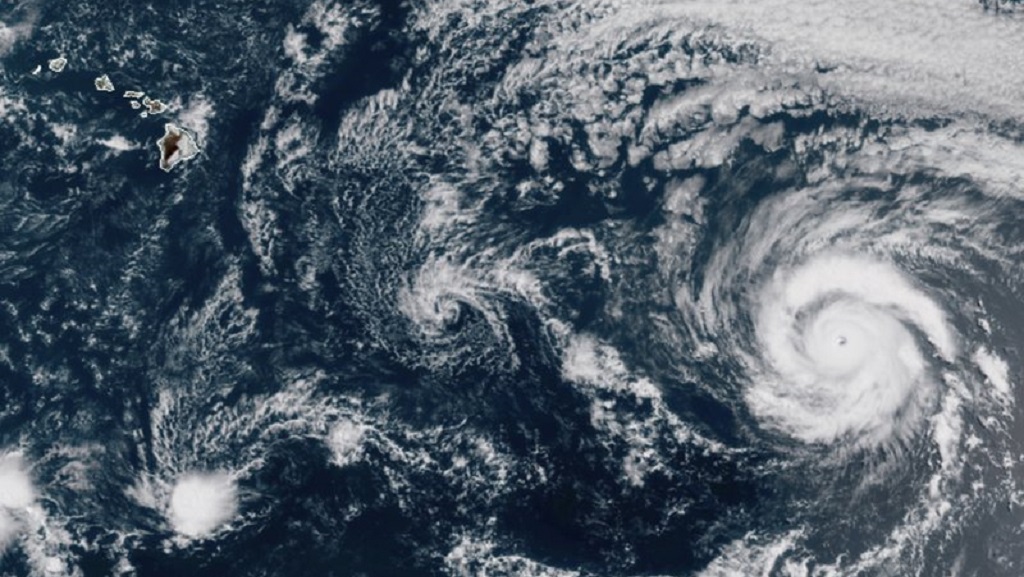 This GOES-17 taken at 3:30 p.m. EDT, Thursday, July 23, 2020, shows Hurricane Douglas, right, churning in the Pacific Ocean heading towards Hawaii, left. The storm is currently a Category 3 hurricane but is expected to weaken before it arrives in the state this weekend. (NOAA via AP)

The first hurricane to threaten the United States since the start of the coronavirus pandemic is presenting new challenges to Hawaii officials long accustomed to tropical storms.

For example, how do you secure enough shelter space when people have to stay at least 6 feet (1.8 meters) apart from one another? What happens when someone shows up at a shelter with a fever?

It's expected to weaken as it passes over cooler water but meteorologists warn strong winds, heavy rainfall and dangerous surf could afflict the entire state beginning on Sunday.

The storm approaches as Hawaii grapples with increasing COVID-19 numbers. On Thursday, the state reported 55 newly confirmed cases, its highest single-day increase since the pandemic began.

"I never thought in 30 years of doing this I'd be answering medical questions," said John Cummings, the public information office for Honolulu Emergency Management, underscoring the odd position authorities have found themselves in.

Unlike other hurricane-prone states like Florida where residents pile into cars to evacuate when storms approach, it's impractical to leave Hawaii to get away from a storm. Shelter space is also limited.

So, as is typical, local authorities are urging most people to shelter at home if they can. Those living in homes built according to code after 1995 should be "pretty good to go," Cummings said.

He recommended staying with friends and family if home isn't safe. Seek refuge in an interior room, he said. Going to a city-run shelter should be a last resort, he said.

At shelters, evacuees will have their temperatures checked for signs they may be infected with the coronavirus.

People who have been quarantining themselves, either because they recently travelled to Hawaii from out of state or because they have been exposed to someone with the virus, may go to a shelter if their housing situation is unsafe.

Those with high temperatures or a travel history will either be isolated at that shelter or taken to a different site, Cummings said.

But in order to have 6 feet (1.8 meters) of physical distancing between people, it must allow 60 square feet (6 square meters) per person or family.

Hawaii leaders have been talking to the Federal Emergency Management Agency about potentially housing evacuees in hotels but nothing concrete has been decided yet.

Caldwell said such an arrangement may not come together in time for Douglas' arrival but might be in place for the next storm.

Many of Hawaii's hotels have empty rooms or are completely closed because the pandemic has shut off most travel to the islands.

State officials have been urging residents for months to incorporate hand sanitizer and face masks into their usual emergency kits containing two weeks worth of food, water, batteries and other supplies.

Caldwell urged people to get groceries for those who can't afford to go shopping for 14 days of food at once when so many residents are out of work because of the pandemic.

"It's the time to look at ourselves as one big ohana working with each other," Caldwell said, using the Hawaiian word for family.

"We're out of the butane stoves already, and sandbags have been going too," Sales said. "It's a little hard to keep things on the shelves."

Food shoppers have been slower to materialize at The Locavore Store in Hilo.

Owner Catarina Zaragoza predicted people will start buying up toilet paper and water if the storm looks threatening and gets closer.

"So many of our storms dissipate before they get here, so I think if we're going to see that kind of uptick it probably won't be till later in the weekend," she said.

People stocked up on supplies early on in the pandemic, but Zaragoza doubts that's the reason people weren't buying.

Hurricane watch in effect for Barbados, St Vincent and the Grenadines