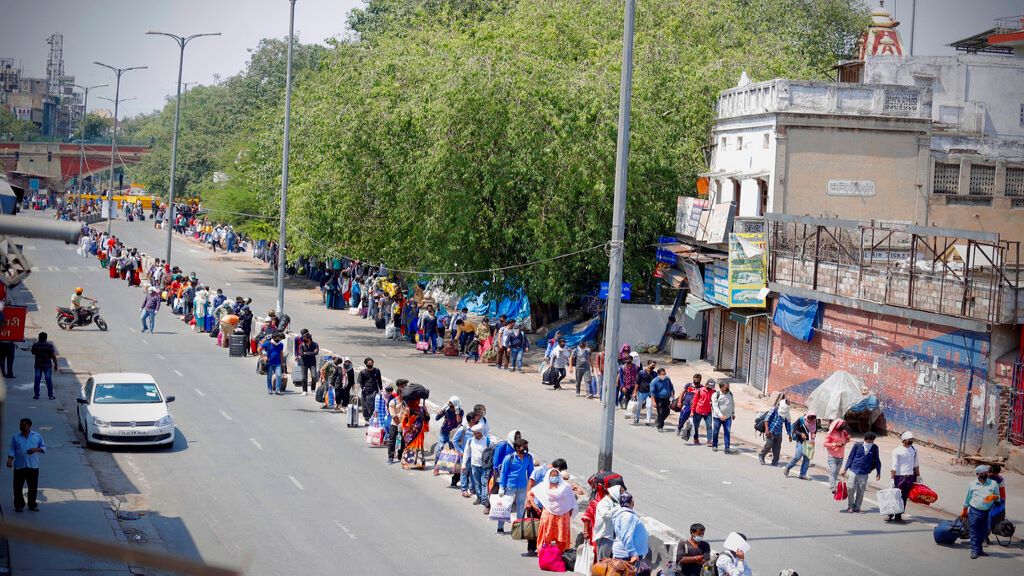 Indians line up to board trains outside New Delhi railway station in New Delhi, India, Tuesday, May 12, 2020. India is reopening some of its colossal rail network as the country looks at easing its nearly seven-week strict lockdown amid an increase in coronavirus infections. (AP Photo/Manish Swarup)

India reopened parts of its huge rail network on Tuesday, running a limited number of trains as it looks at easing a nearly seven-week lockdown despite a continuing rise in coronavirus infections.

Special trains departed from several large cities, including New Delhi and Mumbai. Passengers were allowed to enter the stations only if they were asymptomatic and cleared thermal screening. They are required to maintain social distancing on board and are given hand sanitisers when they enter and leave.

“I don’t care about what happens next. At least I will be with my family,” said Ram Babu Kumar Singh, who works as an air conditioning mechanic in New Delhi but whose home is in eastern Bihar state. “If I stay here for long, I will die.”

Singh was among many who expressed relief over the resumption of train travel, which was suspended in late March along with road and air services as part of the nationwide lockdown. Its strictness helped keep confirmed coronavirus infections relatively low. But in recent days, as the lockdown has eased and some businesses have resumed, infections and deaths have shot up.

The decision to open select train lines was made Sunday as India considers easing the strict lockdown of its 1.3 billion people that has left millions stranded in cities. The announcement led to a mad rush for online bookings on Monday as more than 45,000 people purchased train tickets within hours of the start of sales, according to the Press Trust of India news agency.

India has confirmed 70,756 cases of coronavirus, including 2,293 deaths, but experts believe its outbreak is far greater. Almost a fifth of India’s confirmed infections are people from the densely populated cities of Mumbai, New Delhi, Pune and Ahmedabad, which also are major centers of economic activity.

The lockdown started in late March and emptied the usually teeming railway stations. It also destroyed the livelihoods of millions of Indians who rely on daily wages, left migrant workers stranded in big cities and created a hunger crisis for tens of thousands.

Caught off guard by the large-scale displacement, Prime Minister Narendra Modi’s government is increasingly looking at relaxing the lockdown. It recently ordered special trains to take migrant workers, students and others stranded by the lockdown to their home states after mounting pressure from the opposition.

On Monday, Modi told state leaders in a video call that they will get a greater say in determining the extent of restrictions and relaxations after May 17.

“We have a twofold challenge — to reduce the transmission rate of the disease, and to increase public activity gradually,” Modi said.

He said the effort now should be to stop the spread of the virus in India’s vast rural areas and emphasized that social distancing remains the biggest weapon until a vaccine is developed.

“Now the world will be pre-corona, post-corona just like the case of the world wars. And this would entail significant changes in how we function,” Modi said.

A look inside: Indian photojournalist records life in quarantine

The second virus wave: How bad will it be as lockdowns ease?

Expert warns many countries are driving blind as they reopen