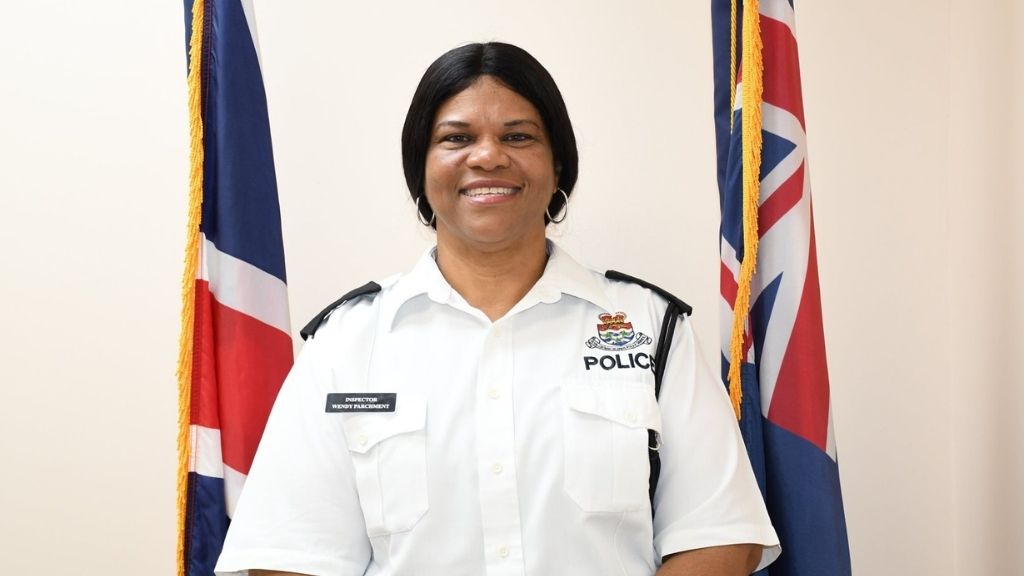 Inspector Parchment said that she chose policing as a career because, “I sought diversity and excitement in my career of choice. I was always very community-minded and wanted to do something with my time that would allow me to foster community relations and meet new people often,” said Inspector Parchment, who could not envision herself as an administrator or doing any other desk-only job.

Over the years, Inspector Parchment has worked within several areas of the RCIPS. She began her journey as a police officer working at the Front Desk in the Uniform Branch as a Diarist, where she ensured that reports were recorded accurately and efficiently. She took pride in her first duty as it was a display of her exceptional writing skills. She would later also accompany senior officers or supervisors on patrol for short periods. She was very driven and worked hard to prove herself, because, back then, the organisation was very male-dominated and she felt obligated to prove she was just as good an officer as everyone else.

After gaining experience with investigations, Inspector Parchment moved on to working in what is now the Traffic and Roads Policing Unit, where she not only did daily traffic duties, but was also required to investigate major vehicle collisions and fatal collisions. At the time, the RCIPS operated a wrecker service. Inspector Parchment taught herself to drive and operate the wrecker in order to carry out her duties as a traffic officer effectively and proficiently. During her time with the Traffic and Roads Policing Unit, she was trained in defensive driving and accident investigations, including coordinates and triangulation methods of mapping and reconstruction. Inspector Parchment worked with the Traffic and Roads Policing Unit for two separate periods, amounting to four years collectively.

Inspector Parchment, who is originally from West Bay, has spent several years working at the West Bay Police Station. “Working in West Bay was a test for me. I had to exercise exceptional discipline to ensure that my integrity never came into question. I sometimes had to make unpopular decisions involving persons I grew up with, some of whom could even be considered family. In the end I knew that the decisions I made were in the public’s interest and that of the RCIPS. I treated everyone with respect and I received it in return and I am thankful for the support I’ve received over the years.”

Inspector Parchment shared that working in the Eastern Districts could be considered the highlight of her career with the RCIPS. She became familiar with the area and its people and embedded herself into the community. During her time there she played an integral role in several high-profile matters including an incident where an offender fired shots at a police vehicle that she was travelling in. The offender was identified and sentenced for this crime. It was during her time in the Eastern Districts that her leadership skills and her ability to take control of critical incidents were observed and most utilized.

Inspector Parchment described her move to the Sister Islands as a historic moment in her career. This move took place on the brink of her promotion to the rank of inspector. The Sister Islands challenged her and allowed her to develop the administrative and operational skills which came with the responsibility of being a Police Inspector and Area Commander. “I was honoured to have been entrusted to oversee policing in the Sister Islands. I found the citizens of Cayman Brac and Little Cayman to be liberal and audacious. This experience was a breath of fresh air for me as my encounters with the members of the public always felt sincere. "

Currently, Inspector Wendy Parchment is the Inspector in charge of the Cayman Islands Detention Centre, where she is responsible for all its administrative and operational functions. She is responsible for over 30 staff members of various ranks. She shares that this role requires a lot of critical thinking and keeps her on her feet. It has been one of her favourite roles so far in her career.

“Inspector Parchment has taken on the role of inspector in charge of the Cayman Islands Detention Centre with a wealth of experience and great efficiency,” says Chief Inspector Frank Owens in Criminal Justice. “During the height of the COVID-19 pandemic, Wendy was instrumental in proactively implementing measures to reduce and manage risks related COVID-19 which enabled the Centre to run efficiently without any disruption, for which I am greatly indebted to her.”

Inspector Parchment stated that one of the reasons why she continued her career with the RCIPS is because she strongly believes that the Cayman Islands will always need a familiar face, someone they can trust to be available and provide them with accurate information and to act not only in their best interest but in the interest of these islands in general. She stated that she is grateful for the connections and friendships she has made over the years, both with members of the public and those colleagues who have become lifelong friends. She is also thankful to her family and friends for all their support over the years, especially during the time that she worked on her personal development to enhance her career.

“On behalf of the Senior Command Team I want to congratulate Inspector Wendy Parchment for achieving 34 years in service to the RCIPS and the Cayman Islands,” says Deputy Commissioner of Police Kurt Walton. “I am proud of the strides and accomplishments that Inspector Parchment has achieved over the years. She is extremely driven and hard-working, but even more she expresses compassion, not only with members of her staff but also with when communicating with members of the public, regardless of their status and disposition. Continue to keep up the good work.”